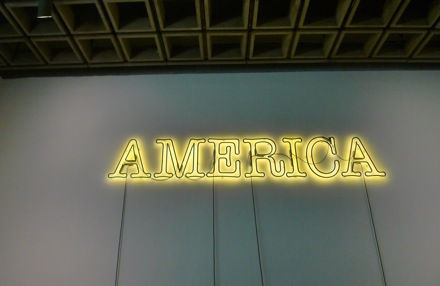 Ongoing at the Whitney Museum is Glenn Ligon’s mid-career retrospective, America. Showcasing his work including the well-known text-based paintings of the 1980’s through current day, the exhibition provides a broad perspective into the artist’s continually evolving career. 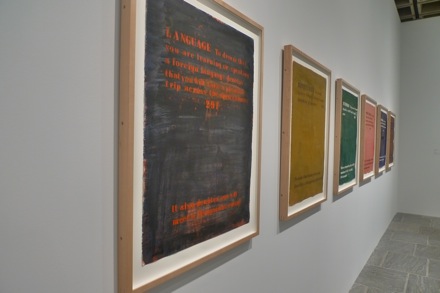 Installation view at the Whitney Museum.

America traces the artist’s experimentation with practices such as painting, photography, drawing, and sculptural installation. A significant portion of Ligon’s career is both inspired by and takes advantage of text within the visual medium. His painting, Untitled (I Am A Man), made in the late 80’s, calls out a strong statement of gender and social positioning at the height of America’s fixation with identity politics. Reduced to a monochrome black-on-white composition, the work allows the significance of the exclamation to take precedence. Also featured in the Whitney Museum retrospective are photographs from Robert Mapplethorpe’s Black Book in conversation with quotes relating to homosexuality and African-American identity. Notes on the Margin of  the Black Book juxtaposes commentary arranged by Ligon with a decent-sized archive of the aforementioned photographer’s images. 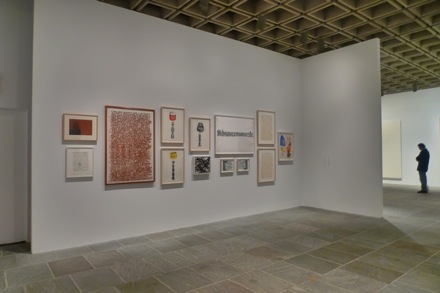 A gallery at America, the Whitney Museum’s mid-career retrospective of Glenn Ligon.

The Whitney also presented various galleries showcasing Ligon’s celebrated text-based paintings that include various media such as paintstick, graphite, or charcoal. The words and phrases in the paintings are mostly inspired by writers like James Baldwin and Zora Neale Hurston or politicians such as Jesse Jackson. It is often difficult to decipher what the text says, and this silencing effect on Ligon’s poetic voice is appropriate given the social minorities with which the artist is associated. The most recent works in the exhibition showcase Ligon’s use of neon as sculptural form. Rückenfigur implies that one is viewing the subject from behind, which aligns the neon work with the larger theme of America as a series of contrasting dualities. Inspired by the opening line of Charles Dicken’s A Tale of Two Cities (“It was the best of times, it was the worst of times…”), the artist has at length stated his interest in the promises and pitfalls of contemporary USA. “I began thinking about how America was at the same place—that we were living in a society that we could elect an African-American president, but also we were in the midst of two wars and a crippling recession,” Ligon told the Whitney Museum. 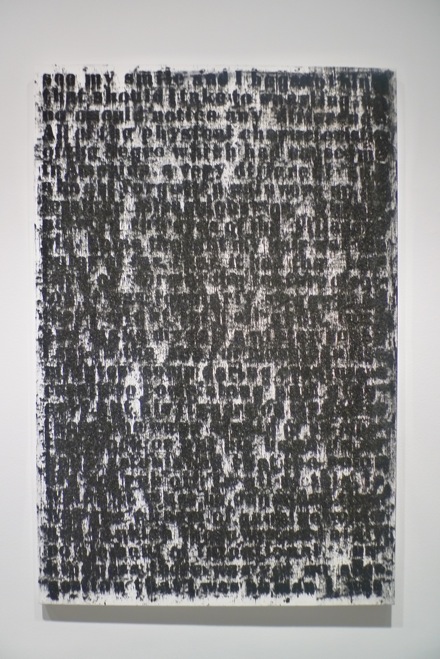 The multiple turns and twists showcased formally and thematically throughout Ligon’s mid-career retrospective suggest not only a dynamic artist at work, but moreover an animated social history coinciding with his efforts. Ligon’s evolution with various media aligns with the social pulse of the moment, resulting in a vigorous aesthetic historiography. America will run through June 5 before moving to the Los Angeles County Museum of Art in the fall.

Telegraph – Herald (Dubuque) April 3, 2012 | Amanda Munger The third annual Taste of the World, sponsored by the Multicultural Family Center, brought more than 750 people to the Five Flags Center this weekend.

The setup was revamped to allow more space for participants to check out the food and cultural displays from more than 20 countries. There were “pods” of food stations, set up much like buffets.

“It allowed people to not stand in lines and snake from one table to another,” said Joyce White, the general manager at the Five Flags Center. “It was important to the patrons that they could have more space to visit all the booths.” This was the first event under the Multicultural Family Center’s new executive director Maddy Cross.

Also new this year was a 4-foot stage that showcased the native dancers, giving a better view than the risers from last year.

“Jewelry and lawn and garden art are always the big sellers in the spring show,” he said.

Witchy business More than 165 people attended the Main Street Players’ production of “Hansel and Gretel” at the Dubuque Museum of Art.

“The museum lobby was filled with young and old, and you could tell everyone was caught up in the fairy tale by watching their rapt and smiling faces,” said Margaret Buhr, director of education at the museum.

Children in the cast sang during the finale, and the cast and crew received a lengthy ovation.

2 concerts in one About 800 people attended the Cody Canada and The Departed, with Shooter Jennings, country/rock music concert at the Mississippi Moon Bar Saturday night.

The sold out show lasted about three hours, with two intermissions added in.

“Both bands, Shooter Jennings and Cody Canada both played full sets, so it was like two concerts in one,” said Scott Thomas, the entertainment director at the Mississippi Moon Bar.

Jennings, the son of Waylon Jennings, performed a couple of his father’s songs, which Thomas said the crowd loved. site cody canada and the departed

mild weather art The winter’s lack of snow was evident in Carl Johnson’s art show at his gallery in Galena, Ill., this weekend.

The artist displayed 25 new paintings that featured scenes from Chicago, Dubuque and Galena, the surrounding countryside and flowers. About 125 people attended.

“They found the show interesting because I didn’t have very many winter paintings — paintings with snow,” Johnson said.

Four of his originals were sold that day.

“It’s always kind of fun because a lot of the people who come are people who I know pretty well over the years and we have nice visits,” Johnson said.

This entry was posted on Saturday, May 7th, 2011 at 12:01 am and is filed under Go See. You can follow any responses to this entry through the RSS 2.0 feed. You can leave a response, or trackback from your own site.