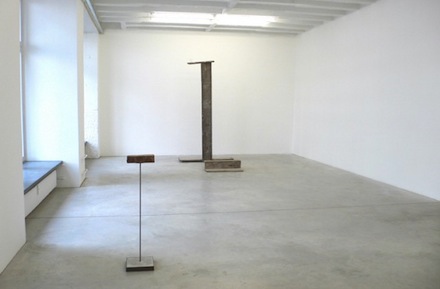 In a show titled “Nonetheless”, Polish artist Mirosław Bałka presents four recent pieces at Berlin’s Galerie Nordenhake. The works are composed of wood, nails, steel, plastic, concrete, glass, and light, and have titles referencing the pieces’ dimensions.   “Nonetheless” hints at an ability do more than expected, which be said of the exhibition itself. 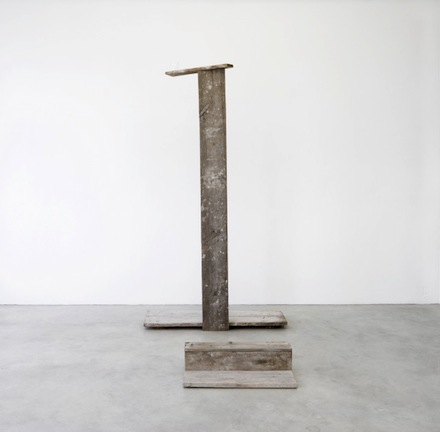 “Nonetheless” uses materials in combines that are proportioned to the human body in a manner that invites visceral response, and references entropic potential. The main piece, “268 x 142 x 54, 84 x 40 x 22,” is composed of wood, nails, and a glass and consists of two separate parts.  A tall wooden column-like structure acts as a pedestal for a small glass, positioned on the viewers left.  In front of the structure, a small wooden step-like piece  distances the viewer but also seems to invite a grab for the glass. A nearly concrete, steel, and brick piece, “105 x 25 x 25″ consists of  a concrete base with a narrow steel rod rising up to present a brick, also tantalizingly close to arms length. 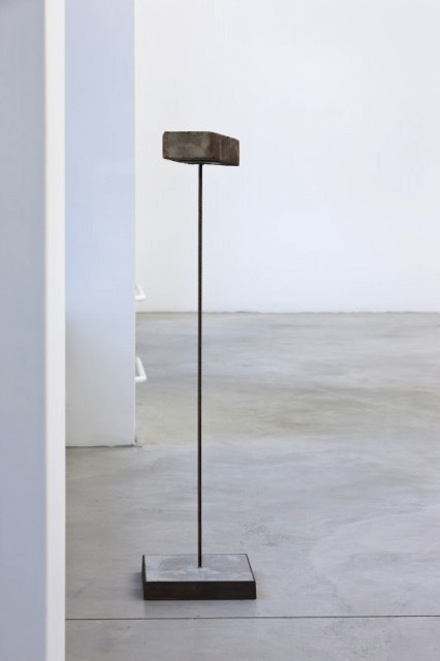 The last two pieces in the show recall Bałka’s concern with memory and are made of objects imbued with significance.  “130 x 32 x 17, 46 x 32 x 2,” consists of four cafeteria trays collected from Polish Ministry of Culture after the collapse of the communist-inspired regime; three joined lengthwise mounted on the wall, and the fourth laying flat on the ground. “120 x 80 x 15/ DB,”  found in a darkened room off to the right,  is composed of a wooden palette with a reddish light hidden in the center, which flashes at timed intervals. 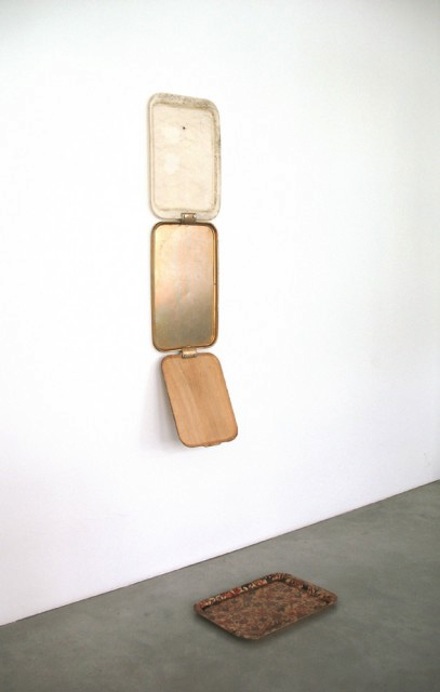 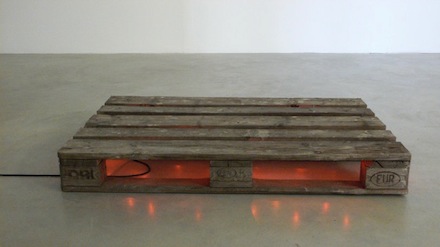 Bałka’s artistic practice involves taking simple objects, like a plank of old wood or a glass, and allowing them to hint at meaning.  In this exhibition, the objects were relatively small compared to other work such as the giant “How It Is” (2009), which was produced for the Tate Modern’s Unilever Series and measured 13 meters high x 30 meters long.  In “Nonetheless”, the smaller scale of the pieces and the composition of the pieces produce a sense of delicacy – the glass is lightly balanced on top of a wooden sculpture that itself looks soft; the brick floats above the ground on a slim steel rod, freed from mortar, blinking light in the wooden palette highlights an absence, and the trays remind that even big governments are fragile. “Nonetheless” is on view until June 25th.

Executives of WCI, which is led by prominent developer Al Hoffman, and Prudential said the franchise agreement fills a void for both companies.

It allows WCI to further diversify and to expand its real estate services division with the help of a recognizable brand name. The new name will be Prudential Florida WCI Reality.

And it gives Prudential back its presence in areas where it lost franchises in the state to Arvida, a subsidiary of St. Joe Co.

The companies would not discuss financial details other than to say it was a revenue-sharing agreement.

WCI, based in Bonita Springs, is known mostly as a home builder and developer of retirement communities such as Hillsborough County’s Sun City Center. With the help of the Prudential name, WCI president Jerry Starkey said his company’s real estate unit will get the visibility it needs to grow. He said real estate could double to 10 percent of the company’s total revenue over five years.

“We can accomplish our objectives by affiliating with those companies that have many years of experience and are willing to build their reputation and name,” Starkey said.

WCI’s real estate division now includes seven offices across Florida, including one in Sun City, and employs 90 sales associates. The plan is to add five to 10 new offices a year and employ about 1,500 agents in five years.

The franchise agreement includes the southern half of Hillsborough; Manatee; Charlotte; Lee; Collier; Palm Beach; and the eastern portion of Dade counties.

WCI, which employs 2,300 people throughout the state, had sales of $565-million last year and revenues this year are expected to top $700-million, Starkey said.

This entry was posted on Friday, June 3rd, 2011 at 2:14 pm and is filed under Go See. You can follow any responses to this entry through the RSS 2.0 feed. You can leave a response, or trackback from your own site.