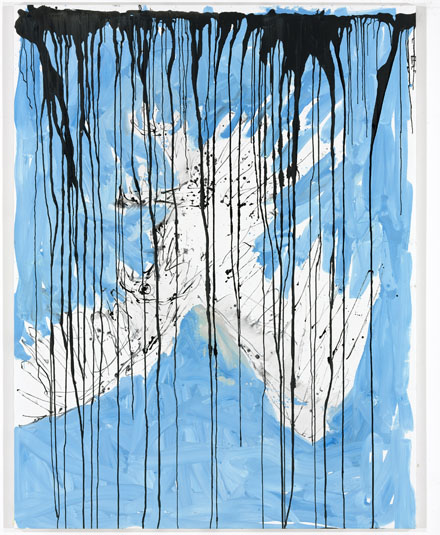 Georg Baselitz, Haderung (2011), all images via Jochen Littkemann and courtesy of White Cube

German artist, Georg Baselitz is now showing at the White Cube Mason’s Yard in London. In “Between Eagles and Pioneers” Baselitz continues his famous upside-down images while using three main motifs – eagles, dogs and double portraits. These paintings were first shown as images that appeared in the historic edition of the German newspaper ‘Die Welt’ to celebrate the twentieth anniversary of German unification in 2010. 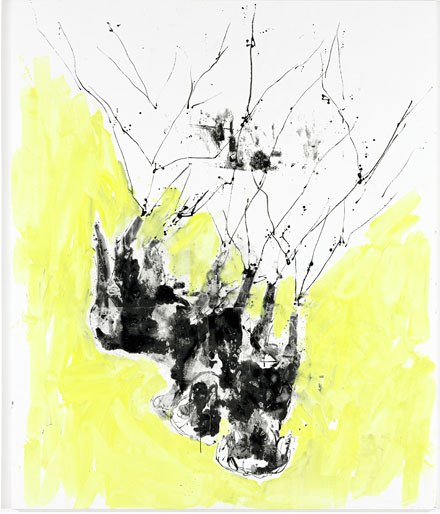 Five canvases, all of tremendous size, fill the ground floor room of the gallery. The paintings explore the images of dogs and double portraits, most appearing with bright yellow backgrounds. Monogram Citron has a bright acidic yellow background with a pair of upside- down dogs at the centre that appear to be anchored to the top of the canvas with spray of thin black lines. Despite the concurrent use of line throughout the canvases, the wide strokes and use of thick swaths of bright paint highlight Baselitz’s neo-expressionist tendencies. 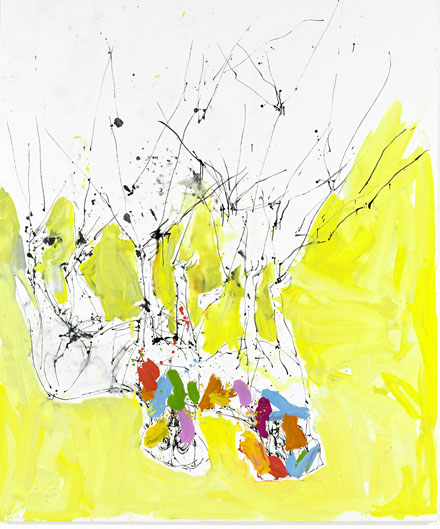 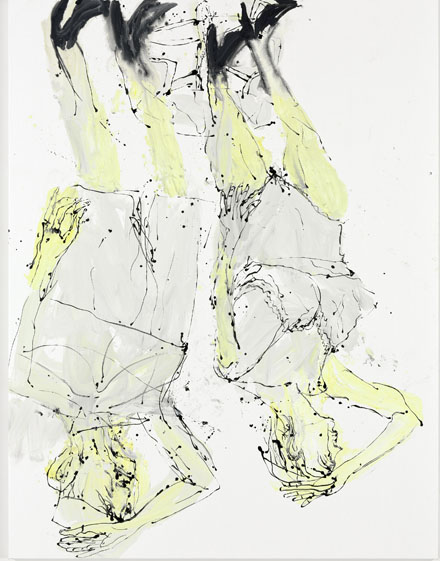 The paintings in the room on the lower ground floor are all focused on the eagle theme and are all quite similar in appearance. All eight canvases are filled with a large eagle hanging upside down, in front of a blue background with lines of black paint dripping down the entire canvas. The eagle has been a source of inspiration for Baselitz throughout his career, in particular because of its place on the German coat of arms. Writer Michael Glover notes how the eagle can be seen as an image of strength and defiance, however in many of the paintings here it seems a desperate image as it clings to the top of the canvas, holding on for life. Often, the outline of the eagle appears incredibly faint in comparison to the bold smears of sky, the sketchiness of the thin black lines give the sense of a skeletal figure rather than a fully fleshed bird. 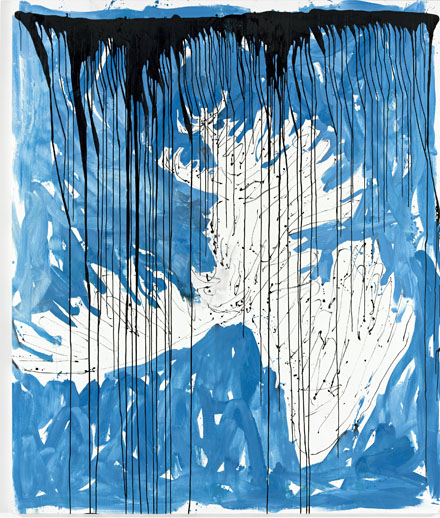 Baselitz grew up in the former East Germany and then moved to West Germany as a student. His style is often interpreted differently around the world, with Northern Americans citing him as a Neo-Expressionist, and the Europeans aligning him with the postmodern movement. Baselitz began to make a name for himself in the 1960s, after the police confiscated one of his paintings, citing its provocative nature. He has exhibited his works around the world, including at the Solomon R. Guggenheim Museum, New York (1995) and Musee d’Art Moderne de la Ville de Paris (1996). Today, the artist lives and works near Lake Ammersee, Germany and in Imperia, Italy. He is also a professor at the renowned Hochschule der Künste in Berlin.

This entry was posted on Thursday, June 30th, 2011 at 4:00 pm and is filed under Go See. You can follow any responses to this entry through the RSS 2.0 feed. You can leave a response, or trackback from your own site.