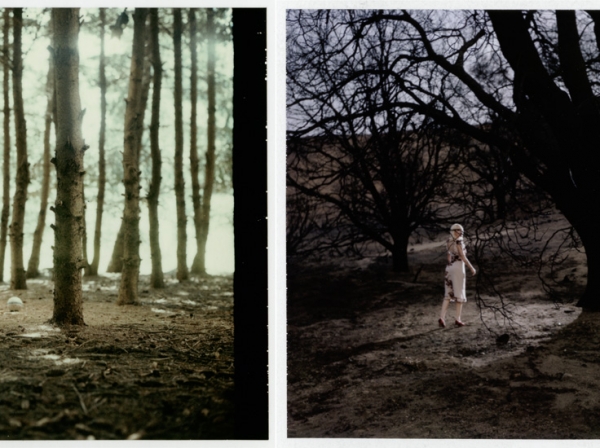 One hundred of Philip Lorca DiCorcia‘s Polaroid photos have been elegantly installed at Sprueth Magers gallery in London.  The 100 Polaroids, all resting comfortably on a single silver lip trailing the white walls, have been assumed from DiCorcias’s Thousand series (2007), itself selected from 4,000 Polaroids, spanning 30 years of work.  Having been pulled from previous and current projects, both professional and private, this exhibition is deliberately disparate as an entity. 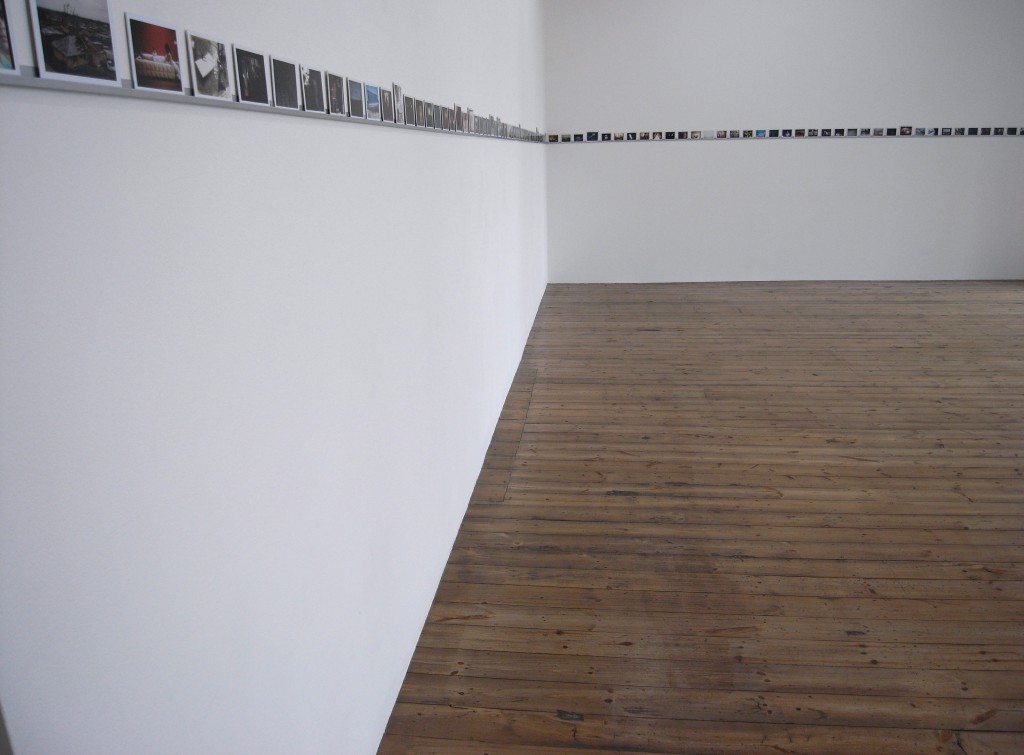 The first room – large, window lit and open – displays the more extensive selection of the photos; spanning the only two walls in a  neat line.  The second room – smaller and darker – displays far fewer, on a single wall facing the entrance.  Although both rooms present satisfactory trails of Polaroids, only occasionally unsettled by larger format or black-and-whites, there does seem to be a change on intention between the two spaces.  Photos in the first room are aesthetically orientated, and touch on themes of colous, sex, misty lights, night skies, intimacy and comfortable interiors, while the second space is more arousing and abstract; a lonely balloon on a mottled wall, mountains icicles and eye contact – contained mini-dramas.

In both rooms the Polaroids flicker between different themes; the only consistency being in their fragmentation.  Telling the British Journal of Photography earlier this year, DiCorcia explains the possible arbitrary nature of this particular collection: “They are separate and distinct Polaroids but I don’t think you can put 100 of them in a row in the way that it’s presented and not have them informed but what there’re with, what they’re surrounded by”.  They are united in their depiction of a life.  Rather beautifully  they remind the viewer of the potential of self-documentation and also the use of photography to narrate a personal story beyond the experience.  This emphasis on biography and DiCorcia’s postmodernist disposition  to play with the reality photography offers contemporary culture, whether candid or contrived, is presented with a casual coolness in this exhibition. 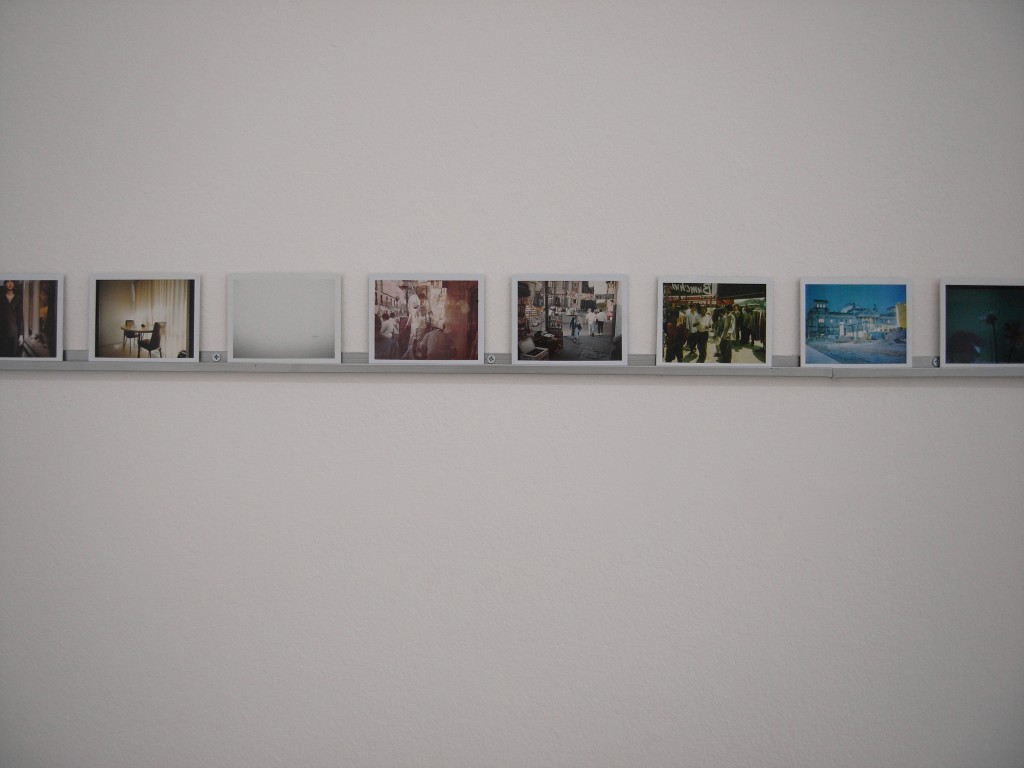 DiCorcia emphasizes the intent and process of image making and taking, over effect. Polaroids as a medium have a sense of containment and self-sufficiency in both content and form that is used by DiCorcia as  a method of intrigue.  The process of image-making with Polaroids is in itself significant as it does not allow for post-production or duplication, and the photographs produced become self-framed and conscious.  However, here they are no longer solitary, but instead contextualize each other. DiCorcia appears to have been preoccupied with these conceptual and visual juxtapositions throughout his career; between the group and the individual (Heads, 2000), between spontaneous and staged (Hustlers, 1990-92) and private and public.  His sustained use of Polaroid to capture the genuinely spontaneous and intimate moments, but also curated compositions, reminds the viewer of these conflicts as well.  The use of Polaroid as an art form in itself, rather than a means to an end (used by most professionals to light measure and break set), makes DiCorcia’s photography idiosyncratic. The show continues until June 18th. 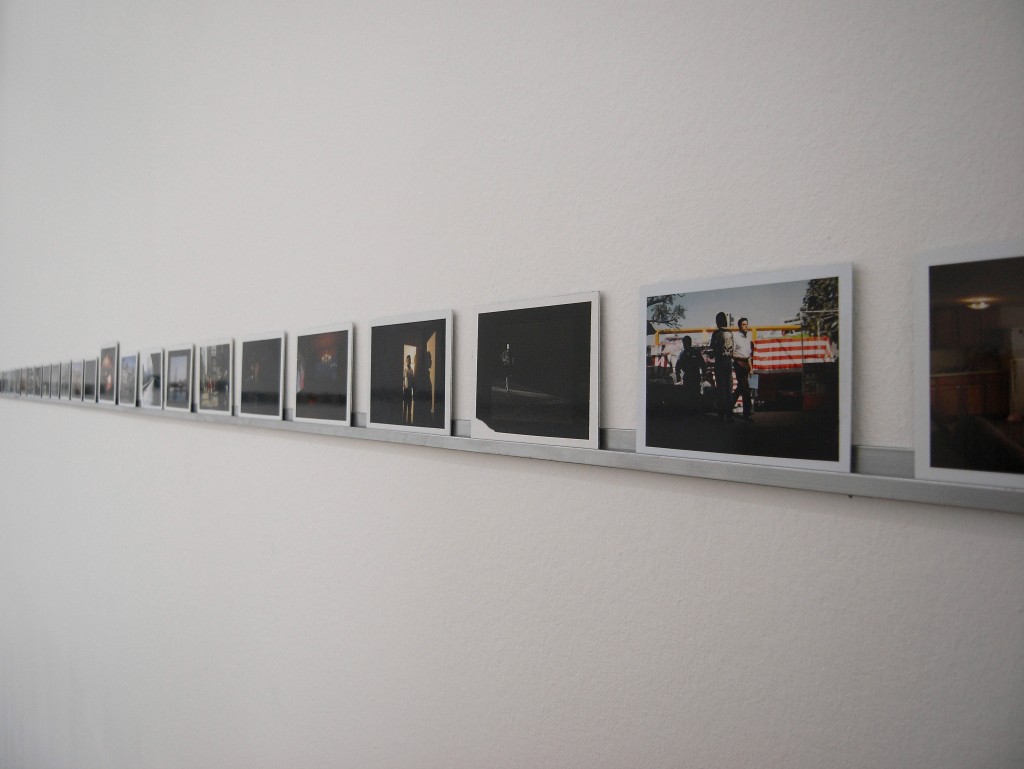 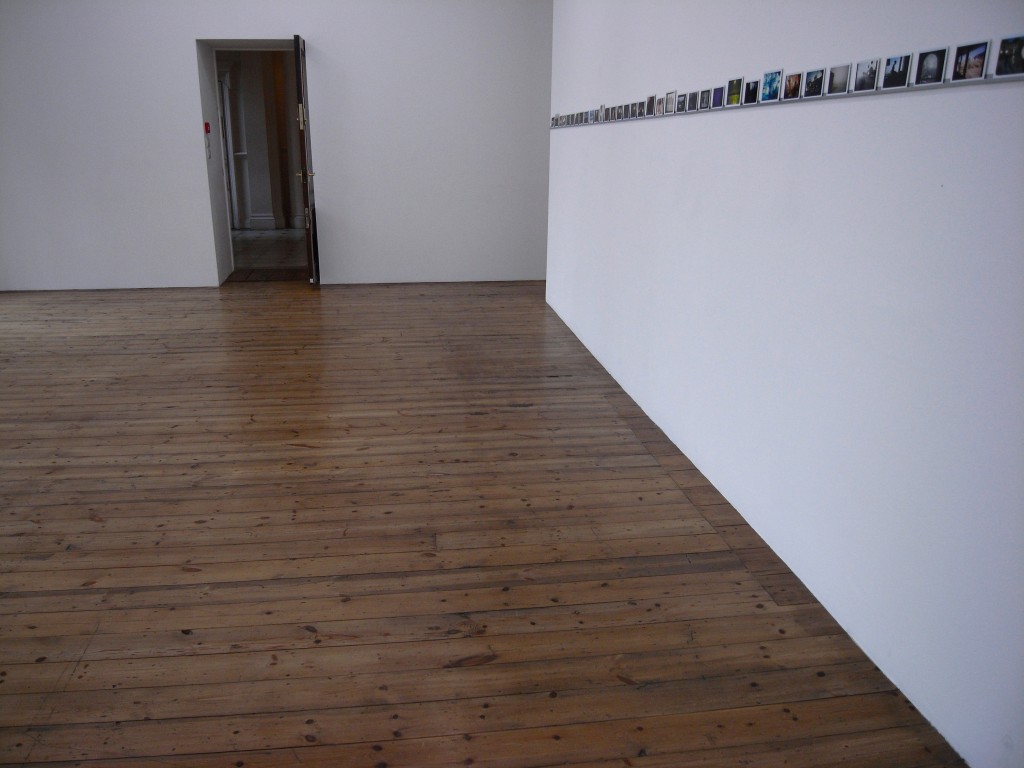 This entry was posted on Thursday, June 9th, 2011 at 1:22 am and is filed under Go See. You can follow any responses to this entry through the RSS 2.0 feed. You can leave a response, or trackback from your own site.