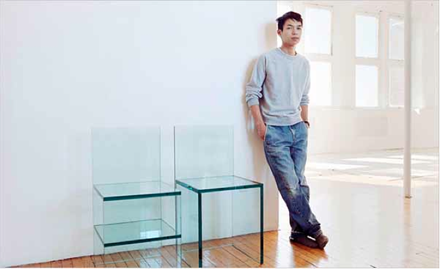 Last year, New York lost one of its most cherished up-and-coming artists and designers, Tobias Wong. Only 35 at the time of his death, Wong was known as a provocateur, his practice most often described as “paraconceptual” and “postinteresting.” A year after his death, he is remembered in an intimate exhibition at SFMOMA. Curated by Henry Urbach, the exhibition highlights some of Wong’s poignant works, and mark the loss of a unique voice.

Accompanying the exhibition is a touching podcast featuring interviews with Wong’s classmates, collaborators, and his fiancé Tim Dubitsky. Among those included in the podcast are Curator of Architecture and Design at SFMOMA, Henry Irbach; Pablo Griff, who worked with Wong in the early 1990s; Paola Antonelli, Curator of Architecture and Design at MoMA New York; Amilia Bauer, Wong’s studio-mate at the Cooper Union; Philip Wood, founder and creative director of online retail space CITIZEN: Citizen; and Beijing-based writer, curator, artist Aric Cheng.

Born in Vancouver in 1974, Wong studied at the University of Toronto before settling in New York in 1997 to study art at the Cooper Union for the Advancement of Science and Art. One of his earliest works was a project inspired by a quote by David Hickey, “Anyone who can’t sell a bag of air with a dream inside it doesn’t deserve to call himself an American, much less an art dealer.” Wong bought plastic bags in three sizes, blew them up, attached them to a cotton candy vendor apparatus, and sold them on a corner in Soho for $1 each.

With his original voice, Wong soon became a fixture of the downtown art and design scenes, showing his objects in design stores and creating installations inside them. In 2001, he slept in the window of Soho boutique Agnes B. Another project, The Wrong Store (2007) was a collaboration with Gregory Krum, the director of retail at the Cooper-Hewitt National Design Museum. It was the perfect hoax: the shell (including a stock of products, brand identity, and matching business cards and letterhead) for a store that never opened. Housed in a tiny Chelsea gallery, the store celebrated its opening on the sidewalk, against the backdrop of a sign reading, “Come In, We’re Closed.” 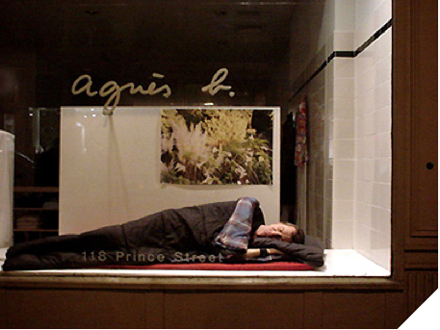 Sleeping at Agnes B (2001). Image courtesy the artist’s website.

Aric Cheng, one of Wong’s collaborators, spoke about the twin tower match book, which Wong created shortly after 9/11. It was not so much Toby’s reaction to the tragedy as his fascination with the reactions of others. “One of Toby’s central talents,” he relates, “was his power of observation, or rather his endemic, intractable impulse to observe […] and therein lay much of Toby’s brilliance – his ability to maintain that critical distance, to not stand in front of the mirror to rather to hold it in front of us.” 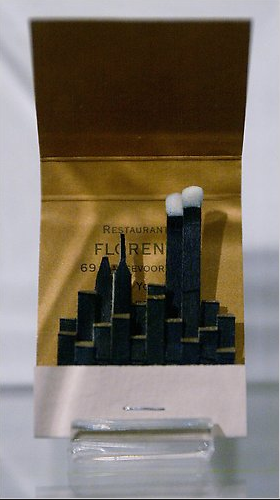 Wong used the term para-conceptual to describe his own work. Curator of Contemporary Design at Cooper-Hewitt Ellen Lupton relates, “In way, I think he was para-design, making jokes about design history, designers’ pretensions and form and process.” In this sense, the small exhibition at SFMOMA devoted to Wong piggybacks of their larger design exhibition, ParaDesign, which is also currently on view. In 2004, Wallpaper* magazine named Wong the Young Designer of the Year. Curator Paula Antonelli called Wong’s work “impeccable from a design standpoint […] but also amazingly ironic, very new, and definitely iconoclastic.” Antonelli first discovered Wong’s work at a design store on Watt St. called Terminal NYC; when she curated “Safe: Design Takes On Risk,” she included his Ballistic Rose and Ballistic Duvet Cover. 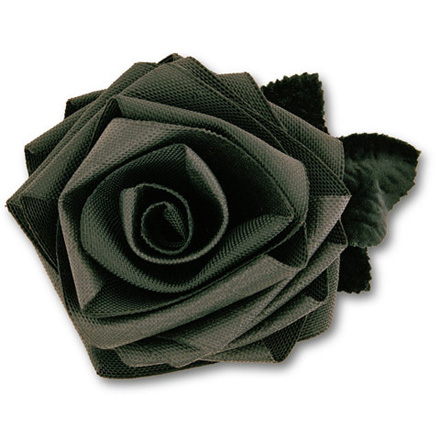 These objects are sewn from black Kevlar, creating a poignant juxtaposition between tough and fragile. The rose, which takes the form of a corsage, protects the wearer’s heart; the blanket keeps the wearer safe wrapped safely in bed. This romantic style became somewhat characteristic; in 2003 he created a set of Tiffany pearl earrings dipped in industrial rubber which the wearer could take off, in Wong’s words, “when and if necessary.” His Aalto doorstop, also 2003, was a cement mold of the lauded designer’s glass Savoy vase, which has to be completely smashed to reveal the final product. 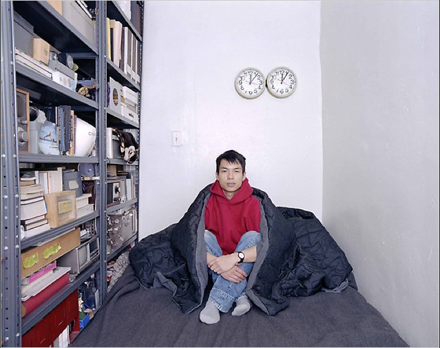 Wong, photographed wrapped in his Ballistic Duvet (2003). Another work, Perfect Lovers (Forever) (2002) can be seen behind the artist. Image courtesy the NYT. 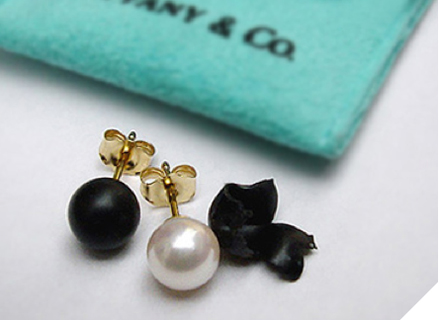 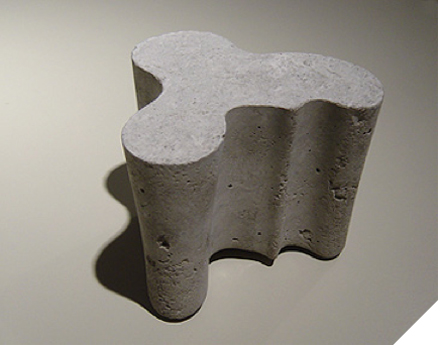 Wong’s studio-mate Amilia Bauer describes collaborating with Wong on a Swarovski Iceberg Chandelier for Art Basel Miami Beach 2005. The duo created a chandelier housed inside an aquarium full of piranhas, which served a dual purpose: to protect the precious object and to reflect the atmosphere, as Bauer describes it, “of frenzied, blood-thirsty collectors.” The artists’ play on status and consumption, operating within the visual vocabulary of the fair, was both clever and mesmerizingly beautiful.

Similar visual puns are explored in Silver Pills (1998) which, when swallowed and digested, “make your shit sparkle,” as an artist’s statement on Wong’s website claims. In 2001, Wong appropriated a chair designed by Phillippe Starck, making it into a lamp and debuting it one day before the chair was to be revealed. In 2002, Wong commissioned a small printer in the East Village to create a peel-as-you-go pad of money. The pads of $100, in an edition of 100, were sold on request at Printed Matter bookshop. Objects to aid partying club goers ensued: Smoking Mittens (2003) allow the wearer to smoke in cold weather; Furry Lighter (2003) aids in the endeavor. His Coke Spoon 1 and 2 (both 2003), are gold-gilt versions of their ordinary counterparts: a McDonalds McFurry spoon and a Bic pen cap. 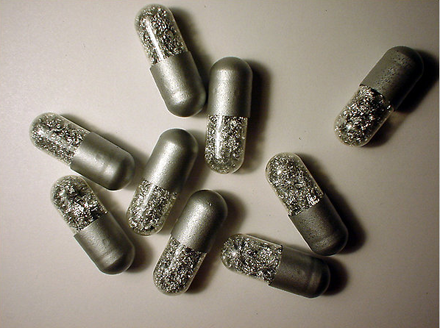 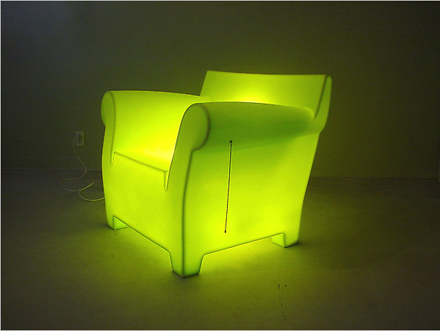 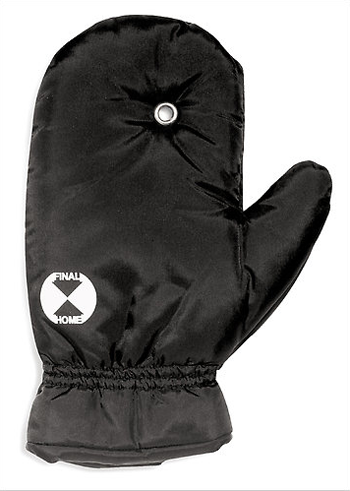 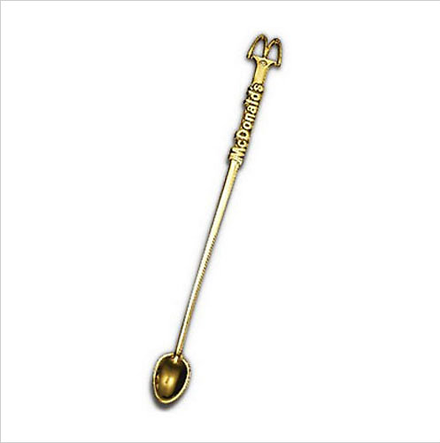 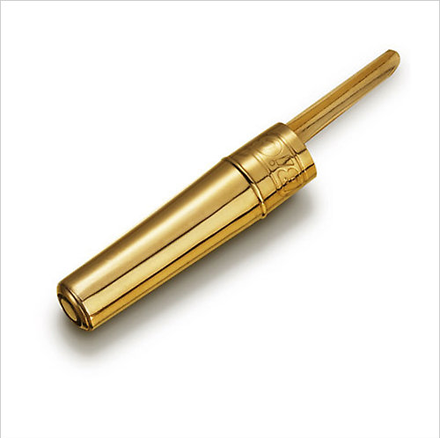 A light switch (2003) enclosed in a Lucite casing renders it an object of lust rather than of use. Wong would have made his great inspiration, Duchamp, proud. (Another of Wong’s idols was Jenny Holzer, who, at Wong’s request in 2002, wrote her famous truism “Protect Me From What I Want” on his forearm. He then had the phrase permanently tattooed.) 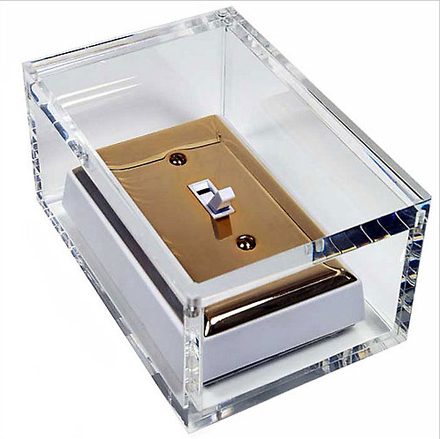 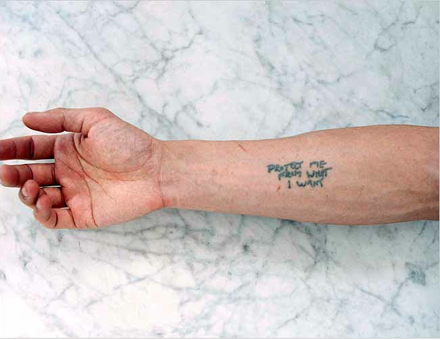 But Wong was much more than his enfant terrible works belied; his softer side is revealed in the exhibition with the inclusion of Perfect Lovers (Forever) (2002) in which he “corrects” Felix Gonzalez-Torres’ work, Untitled (Perfect Lovers) (1991). Gonzales-Torres’ piece consists of two clocks slowly ticking out of sync; Wong’s clocks use the U.S. Atomic Clock, setting the ticks in perfect synch. “Such is the power of a single conceptual tweak,” wrote Kyle Chayka of that piece. Mirror Puzzle (2002) is equally unabashedly poetic. 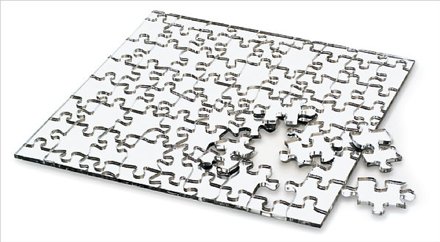 Wong’s death, which was ruled a suicide by the office of the chief medical examiner in Manhattan, came as a shock to the art and design community. Wong was a long-time sufferer of parasomnia, known in layman’s terms as sleepwalking, and it seems that this condition ultimately caused his death. In a long piece about the artist, the New York Times’ Alex Williams writes, “By most accounts, he was actually riding high. Mr. Wong was about to open a new design agency, and was coming off a successful showing at the recent International Contemporary Furniture Fair, a major industry show in New York. At home in the East Village, he and his partner of six years, Tim Dubitsky, a 32-year-old advertising design manager, were talking about having a child by a surrogate. In short, those who knew him well simply couldn’t believe he wanted to take his own life.” Before his death, Wong had made preparations for the creation of a creative agency that would include Josée Lepage, Chen, and Frederick McSwain of the Italian furniture company Cappellini. Chen relates that the agency would “organize ‘happenings’ and pop-up stores, curate collections of objects for shops and brands, and come up with design objects.”

To some, the creme-de-la-creme of Wong’s work was his Killer Engagement Ring (2008) which held an inverted diamond. The gem was intended to be worn facing into the palm, explains Dubitsky, “so that you conceal the danger and the message of love.” Other interpretations are that the wearer can scratch into anything (to create graffiti, for example), diamond being the strongest surface. 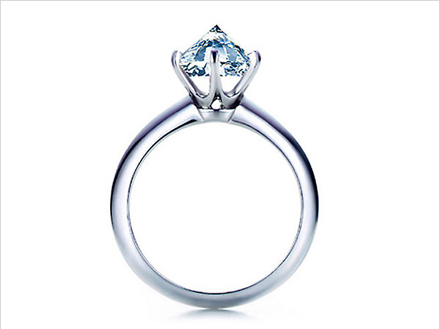 Wong’s website, which is still up on the web, details many of his projects, most of which were photographed in the Cooper Union studios. A number of posthumous products are being released. The Times of New York, for example, is a candle that produces the scent of newsprint. One of Wong’s collaborators, Josée Lepage, has completed production on the item, allowing a flame to burn for the artist in many homes. 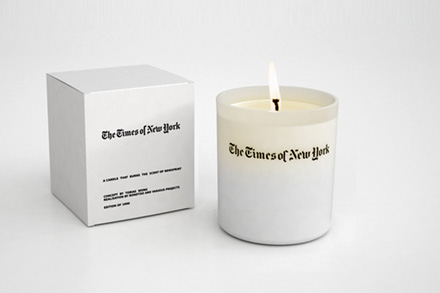 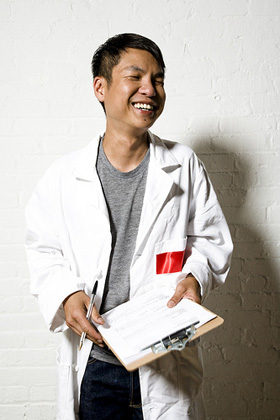 This entry was posted on Monday, July 18th, 2011 at 1:38 pm and is filed under Go See. You can follow any responses to this entry through the RSS 2.0 feed. You can leave a response, or trackback from your own site.