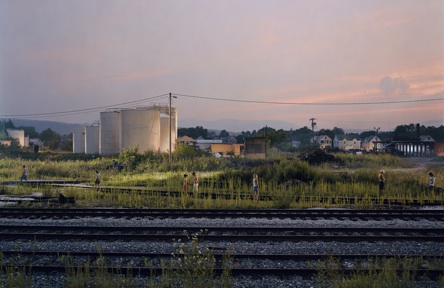 Crewdson is often compared to the contemporary photography pioneers Cindy Sherman and Jeff Wall, and he has often cited the work of film directors David Lynch and Steven Spielberg as sources of inspiration. He appeared at C/O Berlin earlier this month in a private discussion with Craig Burnett, Associate Director of White Cube London, where he spoke at length about his career as a photographer and the catalysts, inspirations, and apprehensions which have propelled him and his work over the years. With a forthcoming and at times quite vulnerable demeanor, Crewdson speaks with marked honesty, eerily comfortable with the ideas of his own uneasiness and frequent anxiety. “Photography is about failure,” he starts, hardly prompted to this end. “I always want to make something perfect, but I’m always disappointed. There’s always a shortcoming that makes you take the next photo.” 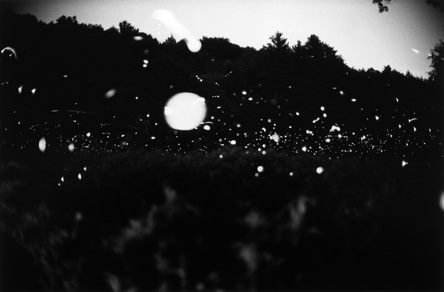 Fireflies is a series of small monochromatic prints taken in the summer of 1996, when Crewdson spent two solitary months at his family’s cabin in Becket, Massachusetts. He photographed the fireflies at dusk each evening with both small and medium format cameras, resulting in a series of 61 images where narrative is expressed with light. Light has continued to inspire Crewdson as a means of storytelling- when commenting on Beneath the Roses, Crewdson describes the scenes as “between-moments, where the action is internal, witheld from view…showing action through the use of light–trying to establish meaning through light, rather than action.”

Originally Crewdson had wanted to make a movie called “Beneath the Roses,” but he jokes that when the producer asked “where’s the story?” and he had no answer, he realized that he preferred the stillness of a photo to the narrative of a film. Known to be a film lover, Crewdson references David Lynch’s Blue Velvet, Alfred Hitchcock’s Vertigo, and Charles Laughton’s 1955 thriller Night of the Hunter as primary sources of inspiration–films that “changed me.” But when prompted further about his plans for making a movie some day, he decisively remarks that “If I began to make movies, I would be judged in a very different way. My photos are like movies, they are influenced by movies, and they have influenced movies, but I don’t think in narrative.” 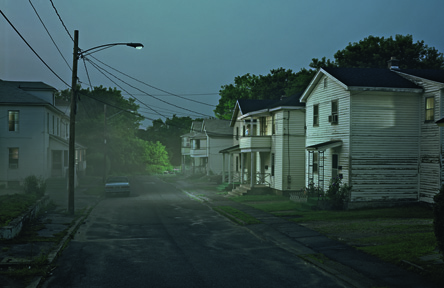 “Beneath the Roses” was intended to “unmask the middle-class American lifestyle.” The photographs depict an interpretation of the consequences of the American dream by depicting the immobility, stasis, and paralysis which has come to characterize the American suburb to some. “I want that feeling of alienation and slight discomfort to be part of the picture–intimate but removed.” Although he grew up in Brooklyn, Crewdson says he was drawn to the idea of photographing the suburbs as “a way of recovering something from my childhood.”

The series epitomizes Crewdson’s obsession with perfection, a word he often uses to describe his intentions. “I’ve always been drawn to photography because of an obsessive need to create a perfect world of detail, light, balance…an obsessive need to control…photography is about editing–editing the world.”  And although Crewdson is always striving for perfection in creating the worlds he envisions, he insists on using only smoke, light, and wet-downs as interventions, and never uses any Photoshop or post-production effects. He is interested in “the exploration of the ordinary,” he says, “and finding something beautiful in it.” When asked why he uses smoke, Crewdson light-heartedly replies “I can’t help it.” 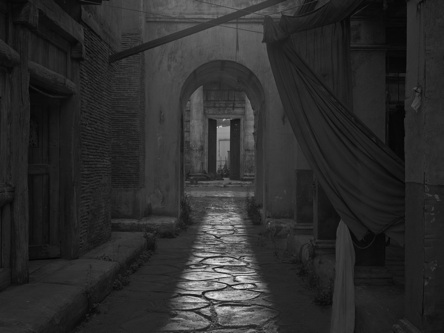 This obsession with perfection is just as evident his most recent series, Sanctuary, which he created at a time when, as he explains, “the world seemed like it would collapse,” referring to the initial bank closures and financial crisis. He describes a resulting “obsessive need for absolute clarity, complete transparency, hyper focus” in his images.  Referencing layers of doorways and hallways as themes that symbolized his feelings of “abandonment, dislocation, loneliness…All of the pictures are projections of my own anxieties, fears, desires…” Crewdson calls Sanctuary “a love letter to the tradition of classical photography, exploring different levels of reality and fiction.” Seeking to capture the “beauty of decay” he saw in Rome, he insisted on shooting the series at dawn or dusk, and almost always doing wet-downs while using fog to create a “lingering sense of atmosphere.” The series was shot entirely digitally and in black and white, which Crewdson describes as creating “a sense of detatchment…a clinical quality.”

Crewdson had referred to the series when it originally opened in New York in 2010 at Gagosian Gallery as “uncanny,”  a concept which has been written about at length by Sigmund Freud in “The Uncanny,” where he explains that because the German translation unheimlich incorporates the root “Heim”–meaning “Home”–the concept of “Unheimlich” depicts a very specific experience when one feels a senses familiarity and terror simultaneously. Crewdson references the essay as a major source of inspiration to him, and is exuberant about the woman’s response, perhaps because–through this series of lonesome landscapes–he had achieved a familiarity, a human connection. “There’s always a terrifying loneliness for artists,” Crewdson expresses. “…It is fear of life. To me the most beautiful moments are the moments of stillness…those are the few times in life when I feast.” 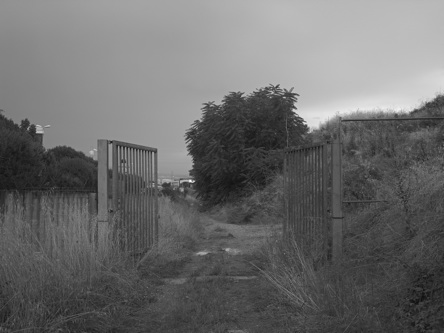 In a Lonely Place will remain on view at C/O Berlin until September 4th 2011.

This entry was posted on Saturday, August 6th, 2011 at 10:55 pm and is filed under Go See. You can follow any responses to this entry through the RSS 2.0 feed. You can leave a response, or trackback from your own site.