Go See – London: Michelangelo Pistoletto “The Mirror of Judgement” at the Serpentine Gallery through September 17th, 2011 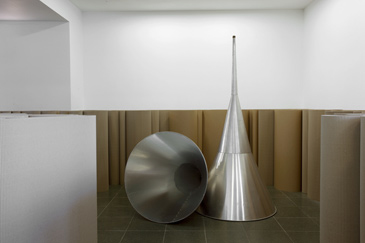 Currently showing at the Serpentine Gallery is Michelangelo Pistoletto‘s sprawling labyrinth of one continuous roll of corrugated cardboard. Custom made for the space, the chest-high installation snakes in and out of each room, constantly diverting the viewer’s course and occasionally taking them to one of several main focus points at which large mirrors (a motif repeatedly used by the artist) are located. 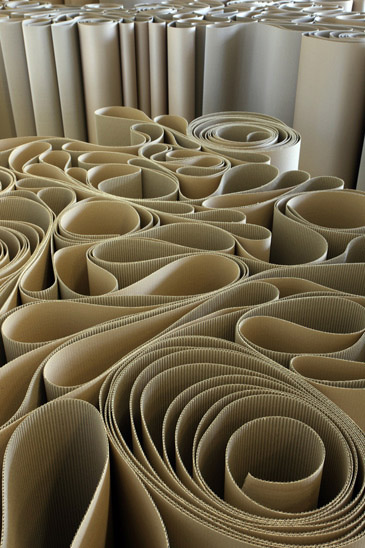 One of today’s most pre-eminent working artists, Pistoletto was first a leading figure in Arte Povera before becoming celebrated for conceptual art. What we have here is clearly a demonstration of the two- a simple, bland spectacle that forces the viewer to find pleasure in it as a concept. The first and strongest piece of the exhibition lies immediately ahead of the door as you enter. A cylindrical structure that reaches the ceiling, the viewer must put their head through a central gap and look down into the wishing well to find the mirror. Here, the viewer’s reflection is cast on top of the sky above, for another circle is cut out and removed from the ceiling in order to show the glass roof above the gallery. Just as the mirror reflects its viewer above, so too does the ceiling mirror the sky above even higher still by being cut away. This is an impressive piece of symmetry and simplicity. The viewer can contemplate whatever might be drawn to them in this serene, otherwise empty space. This is a non-exclusive piece- the mirror allows the work to change constantly in meaning depending on what is reflected in it to the viewer. 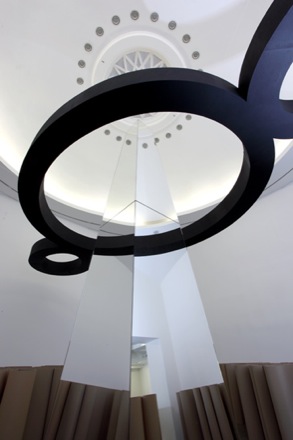 During the sixties, Pistoletto created his Mirror Paintings to wide acclaim. In a statement in 1969, he expressed his intentions behind the abundant use of the mirror in his work, ‘The mirror paintings could not live without an audience. They are created and re-created to the movement and to the interventions they reproduced (…) It is less a matter of involving the audience … as to act on its freedom.’ Indeed, the work is free exactly for the non-importance granted to the viewer. This work is recognizably unconcerned by an individual, unique subject. Universal and all-inclusive, it stands alone regardless: its concept alone fueling its significance. 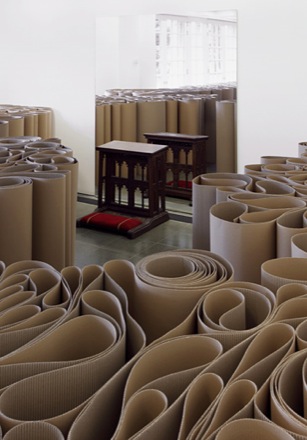 The mirrors in the following rooms are each accessorised by a religious prop: the first a Victorian prayer stool, the second a giant wooden figure of Buddha, the third an oriental rug. But this isn’t a work about religion. Nor is it about finding or discovering religion. This is about a whole building filled up with cardboard. It is about how throughout the show we have been directed by it, obstructed by it and contained by it.

This entry was posted on Friday, August 12th, 2011 at 3:09 am and is filed under Go See. You can follow any responses to this entry through the RSS 2.0 feed. Both comments and pings are currently closed.