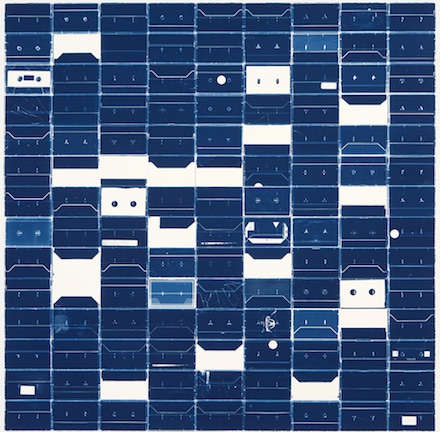 A series of cyanotype photograms by Christian Marclay are on display at the Fraenkel Gallery in San Francisco until October 29th. The exhibition explores the interplay between two outdated recording methods—the cyanotype and the audio cassette—in a fashion both new and yet consistent with the work of Marclay. Commonly referred to as “blueprints” because of the silhouetted blue images produced, cyanotypes are prints uniquely created by placing objects on photosensitive surfaces. Developed in the 1840s and popularized by botanists, architects, and engineers who used the method to reproduce drawings and artifacts with only tracing paper and sunlight, Marclay’s use of the cyanotype continues his exploration of the artistic practice of record-keeping, especially with respect to both audio and visual representations. 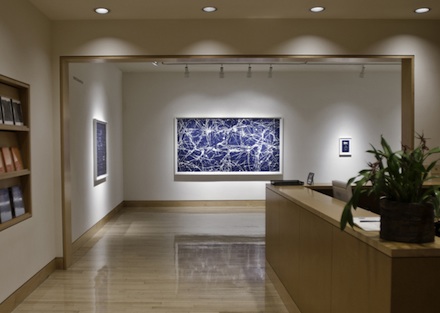 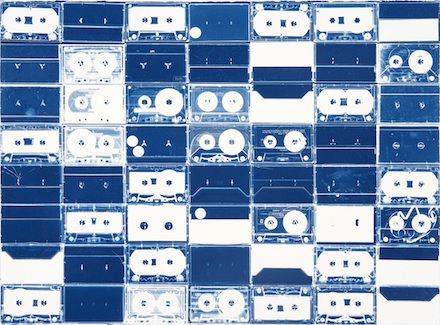 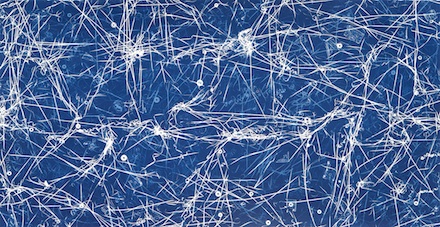 Already a celebrated musician and composer, with his cyanotypes Marclay continues to incorporate his interests in mass media, the music industry, and the sonic in general, all while drawing visual influences from well-known abstract painters. That is, his cyanotypes are made from cassette tapes, some of which are gridded and fully recognizable, others of which are unspooled and strewn across the images. Though the resulting works are often abstracted by multiple exposures and printed in varying dimensions, ranging from singles to diptychs to very large scale images, Marclay titles each piece according to the audio cassettes disassembled therein. I.e., Allover (Dixie Chicks, Nat King Cole and Others), or Allover (LeVert, Barbara Streisand and Others), the “Allover” also referencing Jackson Pollock. 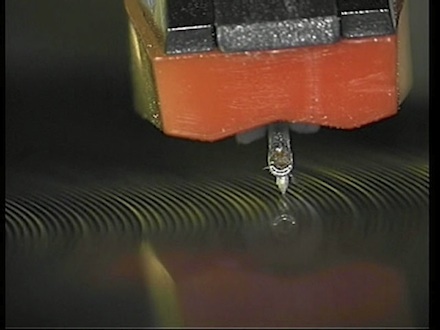 In addition to the cyanotype images, the exhibition also includes a 32-minute video titled Looking for Love, which is incidentally the only sound piece in the show. The video, shown in a small, theater-like set up, plays portions of various records, spliced whenever the lyric “love” is sung. Marclay is perhaps best known for his other recent film, The Clock, which won the Lion Award at the 2011 Venice Biennale.

This entry was posted on Saturday, October 1st, 2011 at 10:00 am and is filed under Go See. You can follow any responses to this entry through the RSS 2.0 feed. You can leave a response, or trackback from your own site.