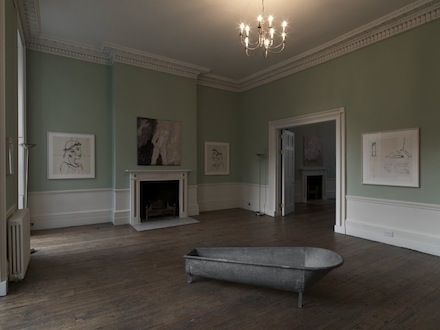 The Vanishing Lake, Tracey Emin’s White Cube-curated exhibition housed at 6 Fitzroy Square, is a meditation on personal metamorphosis. A new series of self portraits that were inspired by her novel of the same name provide the exhibition’s focal point while other works—including textual light installations and large-scale tapestries of her provocative paintings—help create an overwhelming sense of romantic melancholia. 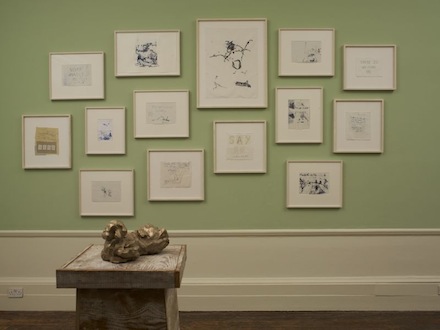 The Georgian house located at 6 Fitzroy Square, which was a haven for artists and writers in the 18th century, provides a rich and rustic canvas for The Vanishing Lake. Green walls, cream molding and distressed wood floors bring warmth to the sparseness of Emin’s sketches. Furthermore, the house itself, which transitioned from an artists’ home to a bank in the early 19th century and has now been restored to its original domestic design, mirrors Emin’s personal and artistic transformation. 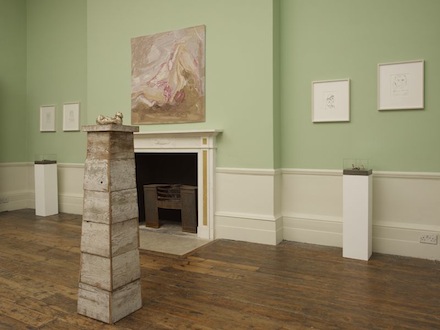 Emin introduces her exhibition with, “The vanishing lake is not a metaphor… It is a real lake… it is small and magical looking… but only exists from autumn to spring… in the summer… it is just a dry dusty barren bowl…The only metaphor is often…This is how I feel.” Emin’s new self portraits, prompted by this passage, demonstrate the artist’s multifaceted and sometimes fractured view of her identity. 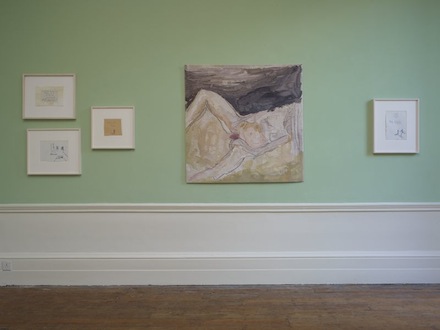 A neon sign in cursive writing that reads “I followed you into the water knowing I would never return” greets visitors on their way in as well as waves goodbye when they exit. It’s a solemn statement of ill-fated devotion to bookend one’s experience at 6 Fitzroy Square. Similarly, the exhibition’s press release describes Emin’s embroidered texts and drawings as “pleas of unrequited love and touching melancholia.” Emin’s work has a subdued beauty that invites viewers to internalize her own fascination with the transience and transcendence of love, that elusive ‘vanishing lake.’ 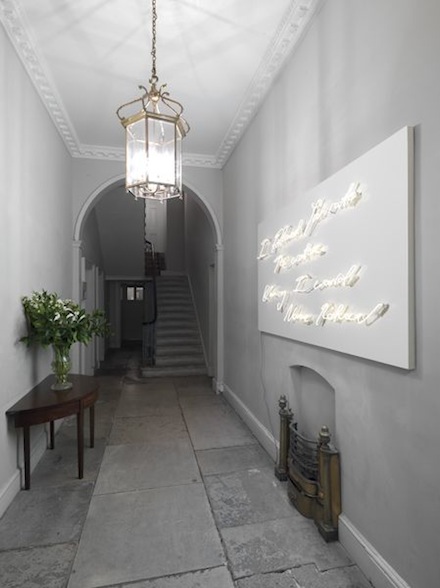 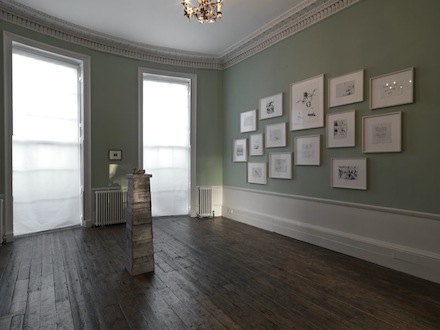 For his effort, the 17-year-old was awarded a full, four-year scholarship — valued at more than $75,000 — to the university, which is one of the top culinary schools in the nation.

This is not your average recipe. It lists more than two-dozen ingredients, and the directions include 45 steps.

“It was pretty exciting,” West said Tuesday. “When they called my name, I gave a high five to one of the chefs that was a judge.” West’s parents, Rick, an information systems manager, and Midori, a waitress, surprised him by driving to Denver, one of Johnson & Wales’ five campuses. artinstituteofatlantanow.com art institute of atlanta

“I couldn’t be more proud of him,” Rick West said of his son’s victory. “It didn’t surprise me. His food has always been good.” Bob Brassard, culinary arts teacher at Shawnee Mission’s Broadmoor Technical Center, accompanied West to the contest. Brassard said his student was cool, calm and collected in the kitchen, where he had three hours to prepare the halibut dish.

“He just did what he did in practice, and it was good enough to basically be the best in the country,” said Brassard, known to students as Chef Bob.

West, who works as a line cook at 40 Sardines in Leawood, said he lost a lot of sleep ruminating over his recipe. The dinner, which feeds four, costs $10 to $12 to make. A restaurant, he said, could sell it for $20 or more.

Judges told West that his dish was “harmonious” and demonstrated “ambitious creativity,” he said.

West found his way into the kitchen at age 10, drawing inspiration from Julia Child on television. Now he relies on Chef Bob.

West’s run at being the best teen chef in America is not over.

Before the end of the month, he will compete in the Art Institute of Atlanta’s Best Teen Chef scholarship competition, and, locally, at the SkillsUSA-VICA contest. Both contests could extend into August, but that’s OK with West.

This entry was posted on Friday, November 11th, 2011 at 7:02 pm and is filed under Galleries, Go See. You can follow any responses to this entry through the RSS 2.0 feed. You can leave a response, or trackback from your own site.