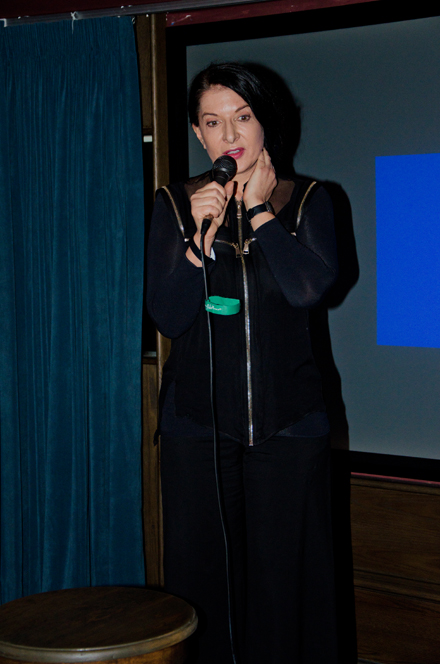 Marina Abramović fielding questions after the preview screening of Marina Abramović The Artist is Present at Soho Beach House. All photos on site for Art Observed by Caroline Claisse.

Marina Abramović was on site at Soho Beach House to present her new documentary Marina Abramović The Artist is Present, which was recently confirmed to show at Sundance Film Festival, and will air on HBO next year. The showcase featured a looping 15-minute preview clip—made while the film was still in production—and between each screening was a Q & A session with the artist and her filmmakers Jeff Dupre and Matthew Akers. Moving from the second floor screening room, a cocktail reception at the 8th floor poolside bar followed. The after-party was attended by the artist herself, along with Dasha Zhukova, magazine editor Jefferson Hack, and Waris Ahluwalia, among others. Both the viewing and the party were sponsored by NOWNESS, an online publication on luxury lifestyle and entertainment. A slide show of fashion, travel, art, and gastronomy was projected by the pool. 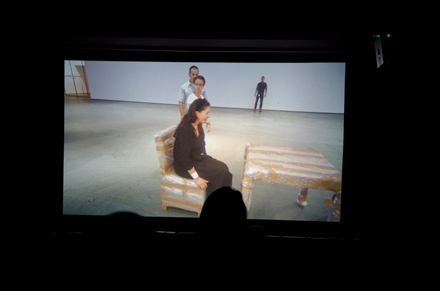 Abramović opened up about her personal processes through the Q & A, answering questions from the audience as well as from Twitter. When a viewer compared her to Maria Callas, she extolled that it was a huge compliment, and had read “all seven” Callas biographies. Abramović is interested in Maria Callas’ on-stage charisma in contrast to off-stage fragility, a dichotomy that Abramović identifies with in terms of her own performance. The new documentary chronicles Abramović’s goal of total motionlessness during her three-month performance at the Museum of Modern Art in New York from March–May 2010, the namesake as well as the inspiration for the film. However, the art piece is not indicative of Abramović’s other personality traits, such as nervousness or sociability. As she explained to the audience, “People don’t understand that the hardest thing to do is to do nothing.” 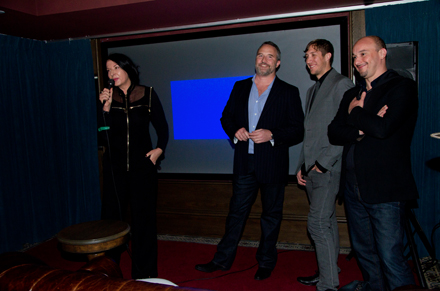 Artist Marina Abramović spoke with filmmakers Jeff Dupre and Matthew Akers, who first met her at a dinner party. 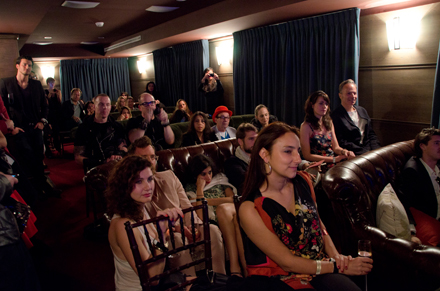 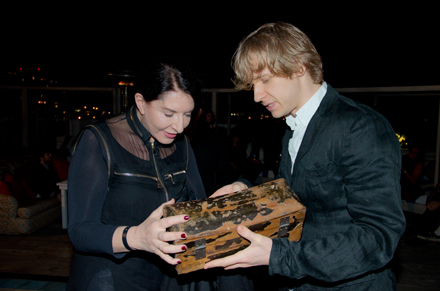 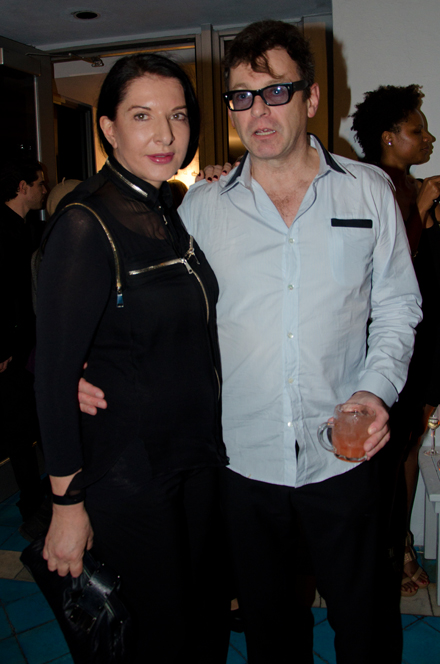 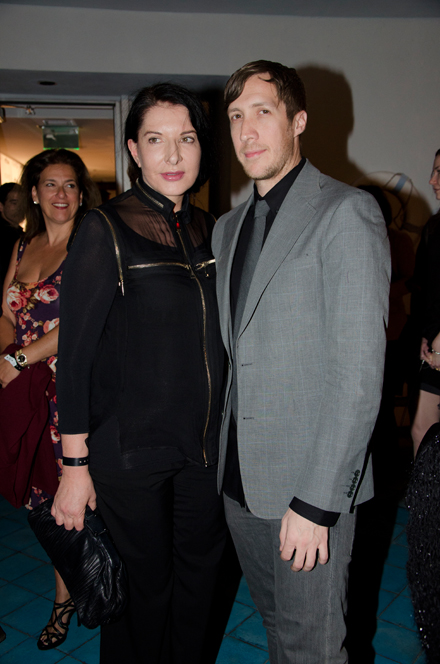 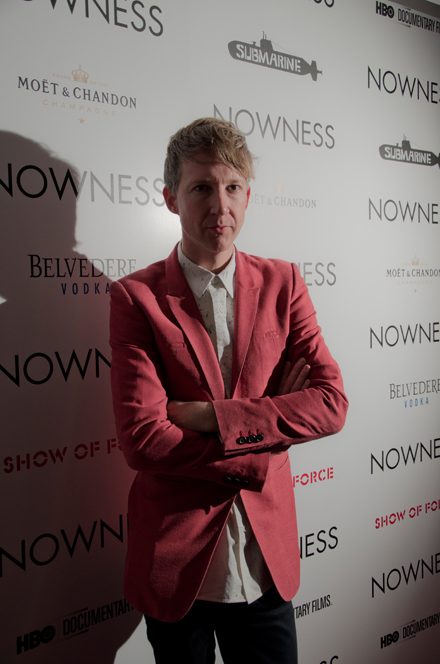 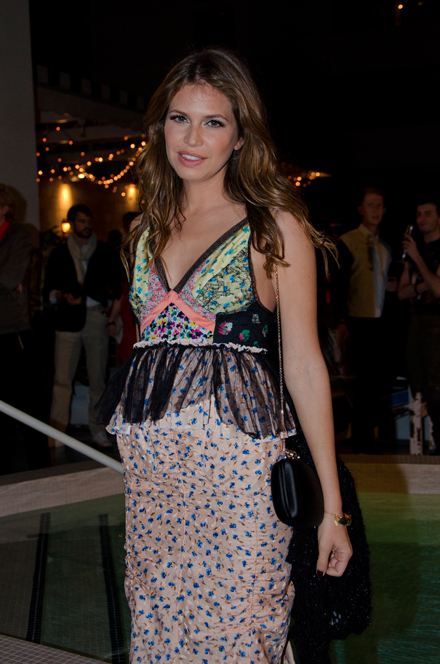 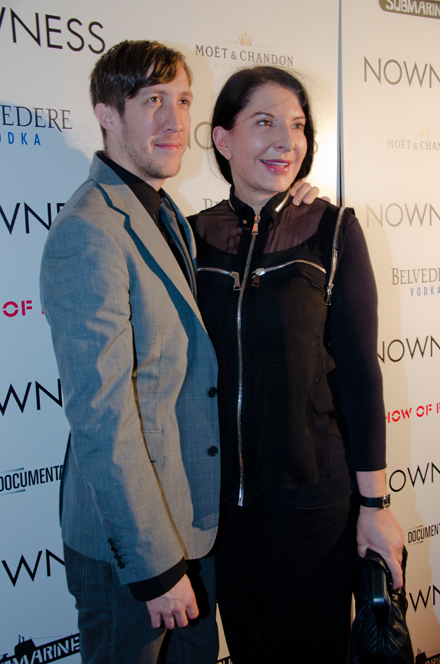 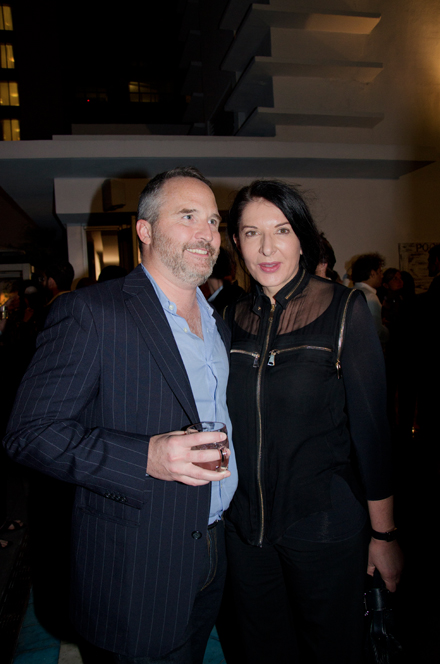 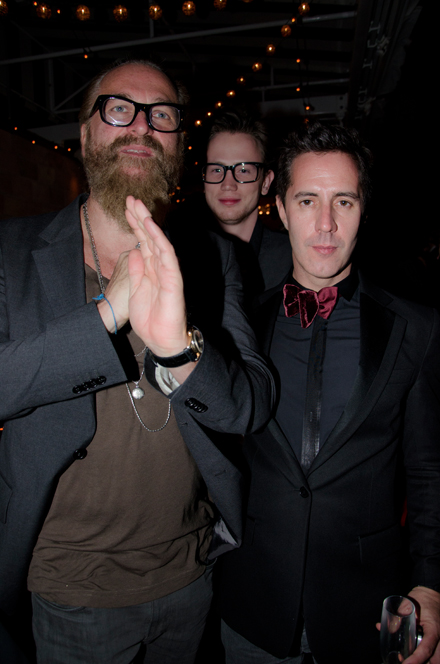 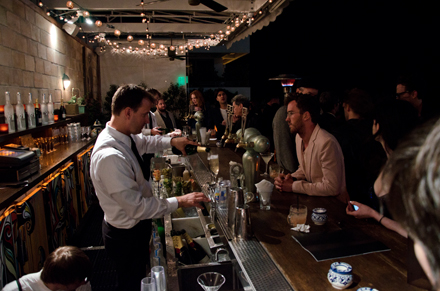 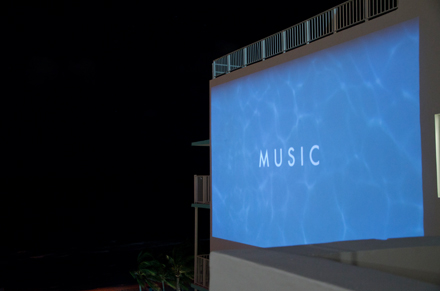 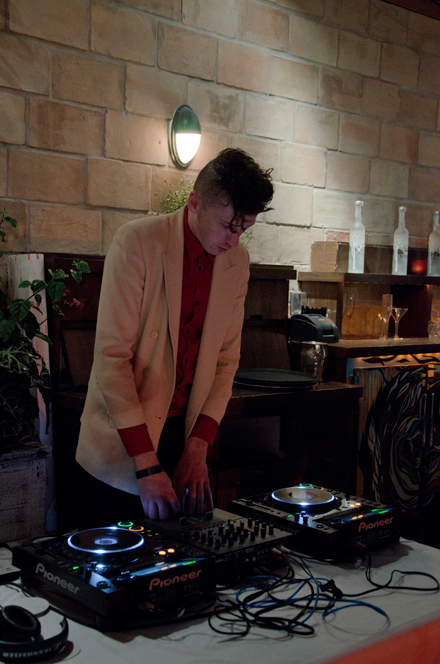 Matthew Stone at the turntables 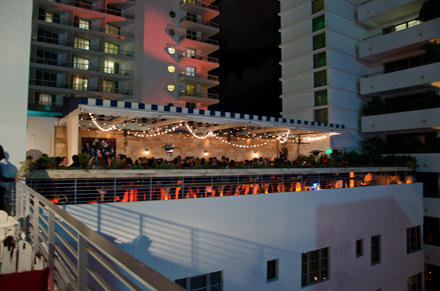 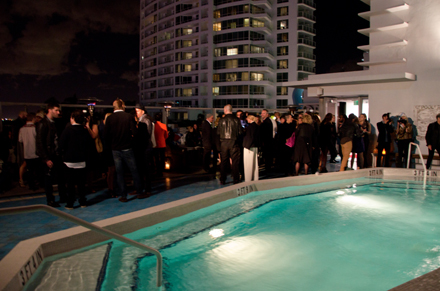 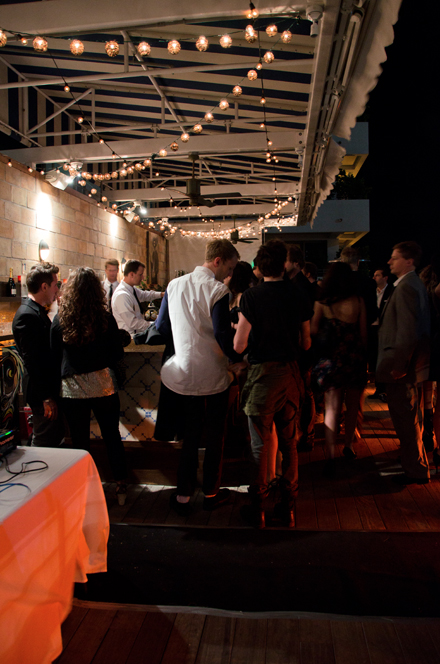 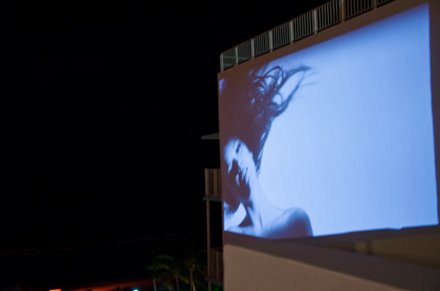 NOWNESS projected clips from other short films by the poolside bar.

The Capital Times March 1, 2007 Byline: Doug Moe A DOCUMENTARY production company, Dream Realization Media, has chosen Madison as one of 12 cities across the country in which interviews will be conducted for a new documentary titled “Dream.” The producers are hoping to find between six and 10 people to feature in the film, which they say will explore “the dreams that inspire and sustain us and the steps we go about to fulfill them.” Their release continues: “Dream Realization is looking for a diverse group of people, each of whom is focused on a particular dream and has already taken steps to achieve that dream. The dreams may fall into such categories as prosperity, ethics, family and relationships, self-fulfillment, fame and charity. There should also be a particular obstacle or challenge that could be an impediment to achieving that dream or could force them to reassess that dream.” Madison area residents who are interested should send a one-page description of themselves and their dream to the following Internet address: mydream@letyourdreambegin.com. see here jimmy buffett tour 2011

The producers provided a few examples of what a potential dream and challenge might involve. For instance:

Dream — A house overlooking the ocean.

Challenge — Employed by a company in transition and in peril of being downsized.

Dream — Achieving recognition among your peers in your chosen profession.

Challenge — Career advancement will require a location and lifestyle change that will be unfavorable to your family.

Dream — To participate in an Ironman triathlon.

Challenge — A serious injury or illness.

I was all set to compose my one-page dream/challenge scenario when I read back through the press release and noticed that Dream Realization Media is only interested in people aged 15 to 50.

In January, I turned 51. I find the rules outrageous and insulting. Am I no longer allowed to dream?

I think the producers might want to rethink the age restrictions. Those of us in the AARP-eligible bracket have some interesting dreams, and, especially, bring some interesting challenges to the table. In my own case, for example: go to site jimmy buffett tour 2011

Dream — To be able to eat as much pizza and ice cream as I could when I was 15 years old without requiring a new wardrobe and/or hospitalization.

Challenge — If I ate a 16-inch double-cheese, three-meat pizza followed by a quart of chocolate chip ice cream tonight, I would become comatose, which, among other things, would interfere with breakfast.

I thought maybe I wasn’t aiming high enough. So:

Dream — To have a singing career as the opening act on a Jimmy Buffett tour.

Dream — Buy a condo in the Caribbean.

It struck me that perhaps those were completely unrealistic — I was aiming too high. So instead:

Dream — To break par for 18 holes at Odana Hills.

Challenge — I can no longer drive the ball more than 220 yards, I yip short putts, my eyes are going bad, my knees and shoulders hurt, and the course is under a foot of snow.

It finally dawned on me Wednesday that something was wrong. I must not have been approaching my dream realization application in the right way, because the producers said that “the film will be a study of how focusing on your dream, regardless of the obstacles, enriches your life.” Enriches?

The more I thought about my dreams and the obstacles, the more depressed I became. Maybe that’s why they won’t let a 51-year-old in the contest.

Dreaming is fine, but after the past month of weather, and catching a terrible head cold this week, I am beginning to understand what the guy meant who said there are times when “survival is triumph enough.” I yearn for a week without any snow or ice. A day without sneezing.

Dream — To make it to tomorrow.

This entry was posted on Saturday, December 3rd, 2011 at 5:20 am and is filed under AO On Site, Art News, Events. You can follow any responses to this entry through the RSS 2.0 feed. You can leave a response, or trackback from your own site.