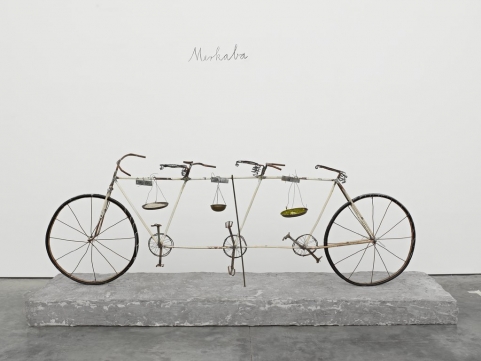 Anselm Kiefer presents his largest show in London yet, covering over 11,000 square feet of the new White Cube Bermondsey gallery, Il Mistero delle Cattedrali. With ties to Fulcanelli’s publication of the same name (published in 1926), the show explores his longtime fascination with alchemy and its processes, Kiefer bringing to light the mystical notions behind the pseudo-scientific procedure. “In the past the alchemists sped up this process with magical means. That was called magic,” Kiefer states. “As an artist I don’t do anything differently. I only accelerate the transformation that is already present in things. That is magic, as I understand it.” 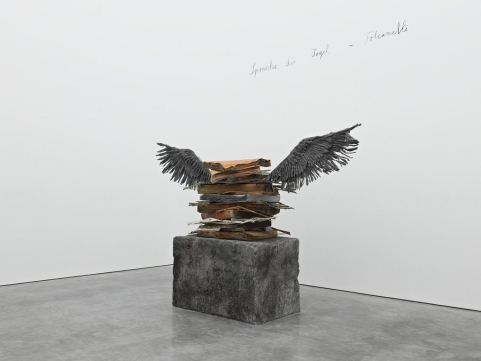 The combination of materials creates imagery of strength and immediacy. Sleek metallic wires intertwine with cement blocks to reveal texture and dimensionality. A palette of whites, grays, and blacks stab the air with great volume. Dark wings attached to a cement block pile. Delicate pewter bowls hang from the crossbar of a bicycle. A model airplane is smashed under the confines of a plaster boulder. 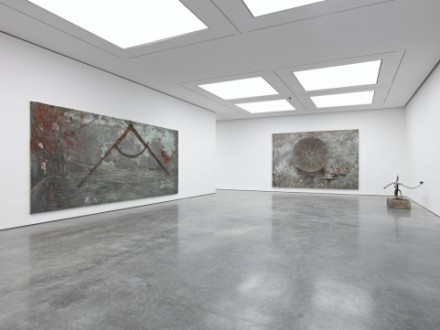 Using his own scientific process for the creation of his work, many of the large-scale pieces underwent an accelerated process of oxidization. A play between chaos and order, Kiefer meant for the works to evoke some form of the sublime; their larger-than-life scale encourages awe from its audiences. There is also the fact that these artworks have been subjected to natural forces in the oxidization process, making them a product of their environment as well as the controlling forces of an artist’s mind. 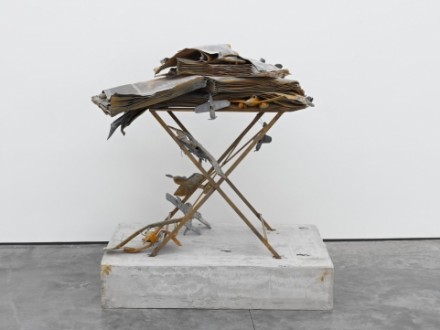 Kiefer also makes a point to illuminate facets of his native Germany and its history. Tempelhof, an airport built in 1927 on land once belonging to the medieval Knights Templar, is transformed into a present-day cathedral; a mystical site of inspiration, meditation, and, in Kiefer’s work, apocalypse. It was known as Hitler’s gateway to Europe and seen by many as a forerunner of the airports of the late 20th century, symbolizing the grandeur and ambition of Nazi Germany. 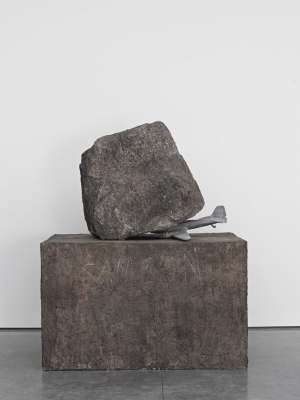 Anselm Kiefer was born in 1945 in Donaueschingen in southern Germany, living and and working in France since 1991. Internationally recognized as a painter and sculptor, the artist’s recent projects include the Louvre and Grand Palais, Paris and Guggenheim Bilbao. This past November, he traveled to Israel to open Shevirat Ha-Kelim at the Tel Aviv Art Museum, the inaugural exhibition in the Herta and Paul Amir Building. 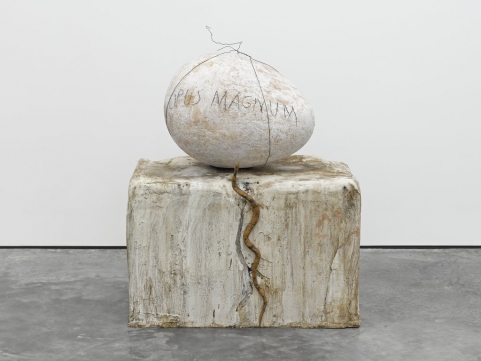 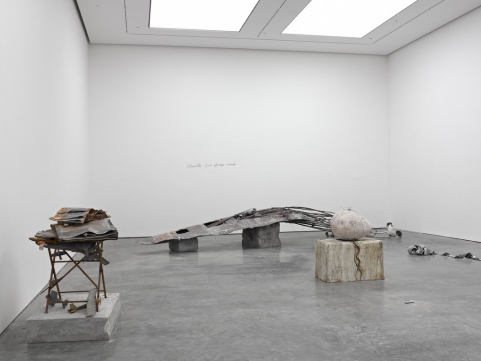 This entry was posted on Friday, January 20th, 2012 at 9:35 am and is filed under Go See. You can follow any responses to this entry through the RSS 2.0 feed. You can leave a response, or trackback from your own site.