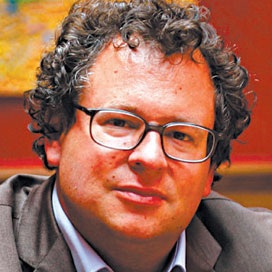 ‬Swiss art dealer Iwan Wirth interviewed by the Financial Times on endowing a professorship at the Courtauld in London, and the importance of donating to contemporary art education. [AO Newslink]

Among them, some high-profile users like New York Mayor Michael Bloomberg and Chief of Staff Rahm Emanuel. The breach made them vulnerable to hacking attacks. AT&T though says it has fixed the security issue.

Former Hewlett-Packard CEO Carly Fiorina, now focusing on her next race after winning Tuesday`s Republican Primary in California. She`ll be challenging three-term senator Barbara Boxer in November. Miss Barb– Barbara Boxer hairdo, though, that seemed to have Fiorina concerned yesterday as she was prepping for an interview. Take a listen.

CARLY FIORINA (CNN): Laura saw Barbara Boxer briefly on television this morning and said what everyone says, god, what is that hair? (LAUGHING) So yesterday. You didn`t– ERICA HILL: Fiorina realizing she`s on a live mike as you can hear then stopped. And she also went on to say, hey, people talk about my hair all the time.

Female candidates dominating this week`s primary elections, Sarah Palin, it turns out is taking much of the credit for Tuesday`s results. CBS News correspondent Whit Johnson joins us from Washington with more. Whit, good morning.

WHIT JOHNSON: Erica, good morning. Well, Sarah Palin looks to be handpicking the future of the Republican Party. She`s gone against the GOP establishment at times and the Tea Party, but she`s certainly putting her stamp on November 2010.

Democrats may be asking themselves after her endorsements went three for four on the biggest primary night of the year.

JOHN MERCURIO (Editor, The Hotline): There`s a certain aspect of her appeal that is important in these primaries. But I think as we move into November, there`s going to be an entirely different dynamic taking place.

WHIT JOHNSON: For now, the dynamic is red hot. Tuesday in South Carolina, Palin`s support helped State Representative Nikki Haley overcome allegations of two extramarital affairs in a run for Governor. Defending Haley on Facebook, Palin wrote, “don`t let them just make things up.” Palin also backed former CEO Carly Fiorina for the Republican Senate nomination in California. Despite pushback from some of Palin supporters that Fiorina isn`t conservative enough. Palin once again came to the rescue. “Carly is the only conservative in the race who can beat Barbara Boxer. That`s no Rino. That`s a winner.” GOVERNOR TERRY BRANSTAD: I`m ready to lead that change. go to web site bp stock price

WHIT JOHNSON: And Palin power pushed former Iowa Governor Terry Branstad one step closer to getting his old job back.

JOHN MERCURIO: Sarah Palin does not want to be king, she wants to be kingmaker. And if you want to be a kingmaker, you have to win. And she needs to come out on of the 2010 midterm election campaign cycle looking like that winner.

ERICA HILL: All right. Whit, thanks.

Finally, for you, a lot of Chicago hockey fans could be a bit bleary this morning after a night celebrating the Blackhawks Stanley Cup Championship.

Last night`s victory came on an overtime goal in Philly as the Blackhawks beat the Flyers to claim the cup for the first time in nearly half a century. Crowded bars on Chicago`s North Side erupted.

And probably no surprise, those crowds flooded into the streets. The celebration rolled on past midnight. Dave Price, I have a feeling it`s probably continuing in some places as well, this morning.

DAVE PRICE: –very, very– and you don`t even know how big a day this is for people from Chicago. It is huge. Harry, of course, just stumbling in this morning after the celebrations.

(Harry Smith laughing) DAVE PRICE: Let`s take a quick check of the weather and see what`s happening all across the country. Two big areas are problems. First let`s go and now take a look at the strong low-pressure system, which is here today, potentially may bring record setting rains to places like Shreveport and Tyler. Yesterday places like Waco receiving just about four inches of rain shattering records all the way back to 1938. We`ll also go up here to Pierre and look at the Dakotas and Nebraska or South Dakota and Nebraska.

This is an area where you may see two-inch hail today, damaging winds and heavy rain. Those are a big problem spots. Talk about the rest of the country a little later. In the meantime, that`s a quick look at our national map, here`s an early look at what`s going on in your area.

(LOCAL WEATHER BREAK) DAVE PRICE: Continues for twenty-four more hours and then you get some relief in the Southwest. Folks, that`s a quick look at how things look right now.

Still ahead here this morning, the evidence keeps mounting. New video of Joran van der Sloot meeting Stephany Flores in Peru, where she was found murdered. We`ll tell you why he could have been arrested before the crime.

HARRY SMITH: And a dramatic drop in heart attacks in Northern California.

We`re going to find out what they are doing right.

This is THE EARLY SHOW on CBS.

(ANNOUNCEMENTS) MAGGIE RODRIGUEZ: We`ve learned that just before Joran van der Sloot left for Peru, where he`s now admitted to committing murder. He could have been arrested for another crime. We have all the details coming up.

This entry was posted on Sunday, February 12th, 2012 at 2:19 pm and is filed under Art News. You can follow any responses to this entry through the RSS 2.0 feed. You can leave a response, or trackback from your own site.