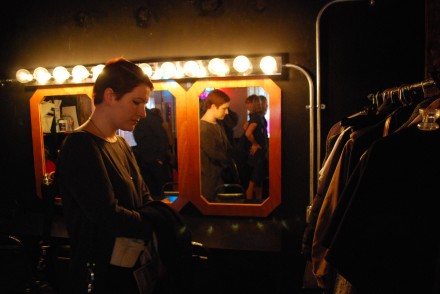 Gearing up for a performance piece on the fourth floor.  All images for Art Observed by Anna Mikaela Ekstrand.

The festive albeit politically charged atmosphere at the 2012 76th annual Whitney Biennial‘s pre-show event was practically interdependent, with the political climate not only informing the sentiments of viewers, but arguably the art itself. While protesters outside encouraged entering guests to “Occupy the Whitney,” antagonizing Sotheby’s and Deutsche Bank for withholding benefits from workers and developing financial strategies to benefit the ‘one percent,’ art indoors at the biennial also challenged artistic convention against the same political scale, with over 50 artists showing work. 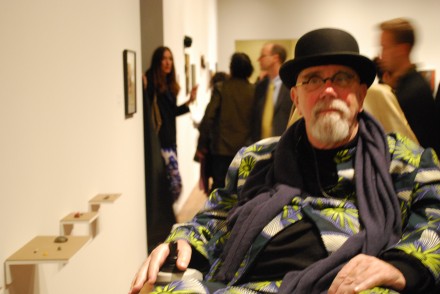 The first Whitney Biennial was in 1932, just two years after the Whitney Museum was founded. The name “biennial” was first applied in 1973, thus beginning the current format. This year’s biennial is curated by Jay Sanders and Elisabeth Sussman. Sanders was the Director of Greene Naftali Gallery from 2005 until his recent transition to curator, although his career has included many other programmings outside of his home gallery—notably, Looking Back: The Third White Columns Annual at White Columns in 2008 among publishing ventures at Artforum, Texte zur Kunst, BOMB, and other art sources. Sussman, the Curator of Photography at the Whitney, curated a retrospective of Mike Kelley‘s work in 1993, to whom the 2012 biennial is dedicated. 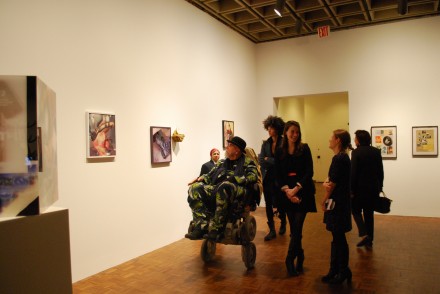 Mike Kelley passed away this January at the age of 57 in Los Angeles, in what was assumed to be a suicide. This posthumous showcase of three videos will be Kelley’s eighth Whitney Biennial, as planned prior to his unexpected absence. His work is known for tackling emotional issues, most recently with Mobile Homestead, the now-unfinished work he’d been developing since 2006. The Mobile Homestead project sought to recreate Kelley’s childhood home from outside Detroit with two versions: a trailer to wheel around for high school lessons as an example of conceptual art, and a stationary version to sit outside the Museum of Contemporary Art in Detroit. The films at the biennial document the 2010 transit from the Detroit museum around Michigan, interviewing Michigan residents and suggesting greater socioeconomic implications of the flight from the city. The stationary design was not built, and uncertainty surrounds completing the project. Mobile Homestead is in storage in Michigan. 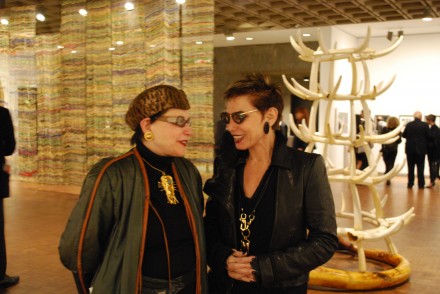 Overall, the curatorial theme among the 51 exhibitors is one of deconstruction. Emphasis on behind-the-scenes understanding of the artist’s studio in performance art, not only with self-referential pieces, but also Green Room by Wu Tsang tinting the fourth floor performance space, the dressing room with mirrors on view behind the stage, and an unexplained horse on Sarah Michaelson’s vanity. Performers had been recruited via email for their lack of dance training, perhaps to further deconstruct and disassociate the processes of movement. 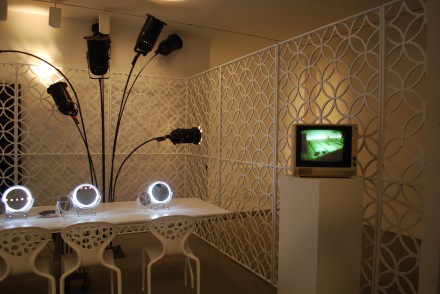 Activism against the Whitney called to end to the next Biennial in 2014. The Arts & Labor facet of the Occupy Wall Street force claims that the elite and corporate art patronage funding contemporary art today is a byproduct of a latent art historical moment, in which fledgling achievement depended on grander financial support. However, in lieu of contemporary clashes, the protesters feel elitism and gentrification has construed the initial goal of the biennial, and seek to have the current model abolished. A mock website was published shortly before the opening to satirically document further concerns. 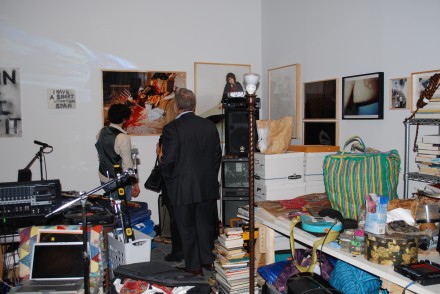 Dawn Kasper’s This Could be Something if I Let It 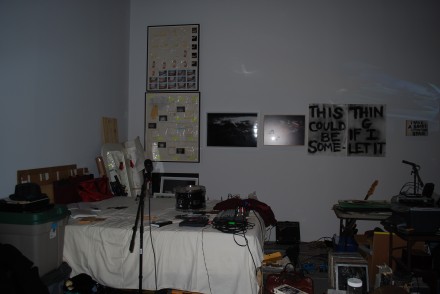 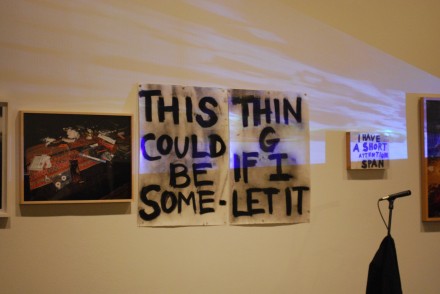 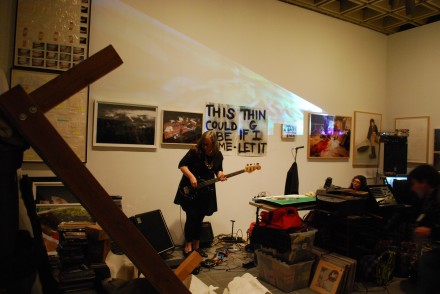 Standout works by Dawn Kasper and Latoya Ruby Frazier straddle the line of elite art while paying testament to economic hardship. LaToya Ruby Frazier photographed her mother, grandmother, and town surroundings in depressed steel-town Pennsylvania. The project began by studying Great Depression photographs commissioned by the government to depict poverty. Frazier noted their lack of self-representation, tying it to her own search for beneficial action. As she told T Magazine, “Without financial resources or better access to health care, I did what came natural. I documented it.” 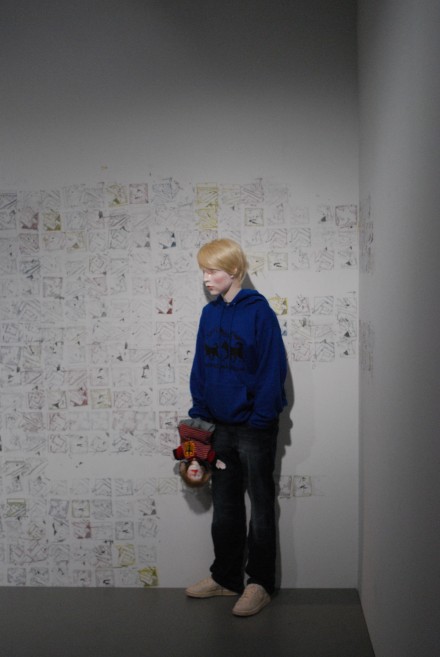 One particularly powerful image, Go forth where? We Don’t Have Horses in Braddock PA!, shows a Levi’s advertisement of two men between a horse with text sprawling, “GO FORTH.” The subject matter is reminiscent of Richard Prince‘s Marlborough series, which re-appropriates commercial advertisements as symbols of idealism. However, while Frazier’s image affirms the ideology, it raises questions of its validity to the struggling subculture. 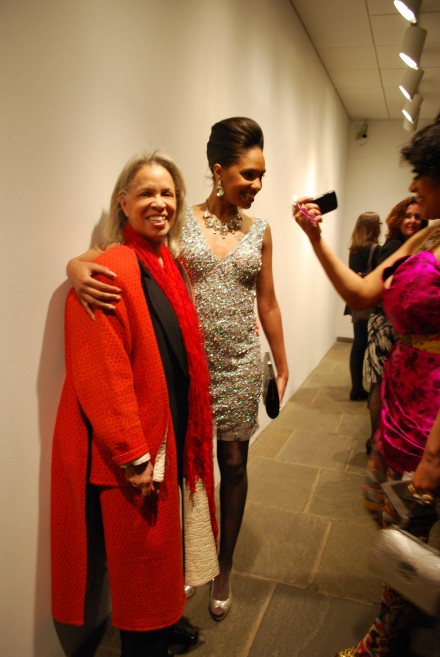 A performance piece by Dawn Kasper continues the theme of art historical recession. Kasper told Reuters that she lost her job, and needed a studio space to be provided by the museum. Her showcase is a self-described “nomadic studio” on the third floor, in which she incorporates both items and behaviors from her personal space, and will live during opening hours through May 27th. Part-mediation of Marina Abramović‘s The Artist is Present, part autobiographical personal space of Tracey Emin‘s unmade beds, the performance piece is called This Could be Something If I Let It. In the room, she will make art and host so-called studio visits. Like Frazier’s work, Kasper has parlayed unemployment into success through the Whitney Biennial. 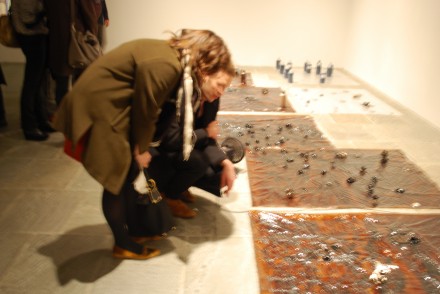 Fluid Employment by Sam Lewitt directs ferroliquid across a magnetic plane, shaping bubbles on a darkly oiled path. Though there is little explanation for the work, the title’s significance in lieu of Kasper and Frazier’s work may suggest a quest for direction and connection in a world low on fiscal fuel. 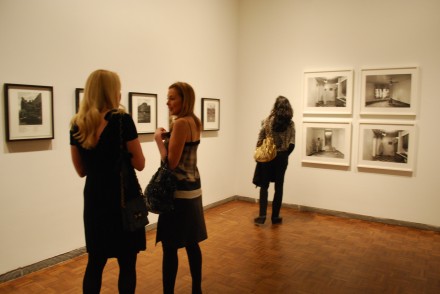 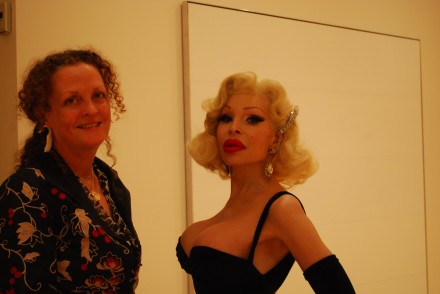 Whitney director Adam Weinberg greeted guests in the main hall, among whom included artist Chuck Close, New York Times critic Carol Vogel, Multimedia artist and Professor Coco Fusco, Artforum executive editor Don McMahon, MoMA’s Glenn Lowry, and MAD’s Holly Hotchner. Art patrons such as the Arnhold and Coppola families were also in attendance. There was an open bar, hors d’oeuvres, and a rumor that the artists had gone for karaoke the night before. 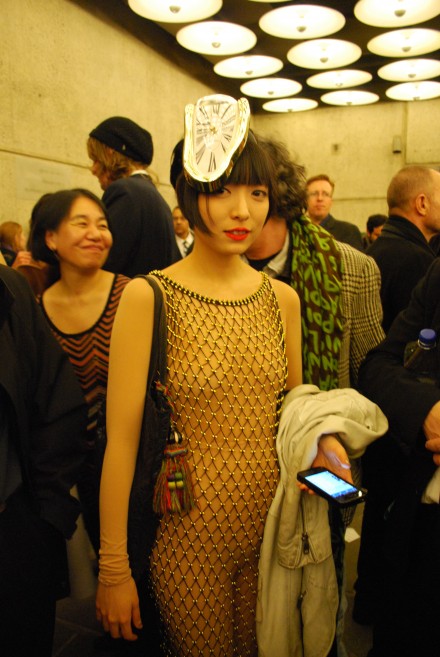 Outside the Biennial, art critic Jerry Saltz was greeted by a pair of comical art journalists with a red doormat as a carpet, a banana as a microphone, and an iPhone as a camera. The website listed on the magnets they handed out describes the team as, “a collaborative project…to explore the nature and understand the perception of biennial exhibits within the art world, and, in so doing, to develop a collective body of work that will be exhibited in as many biennial exhibits as possible – especially the really cool ones.” 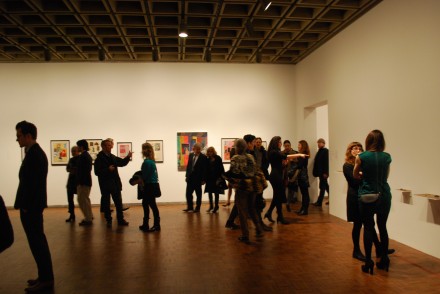 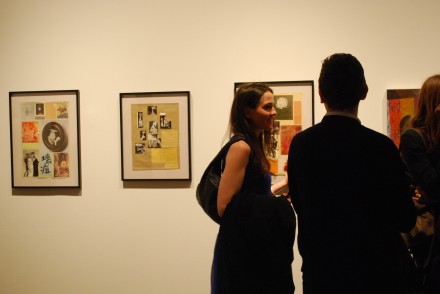 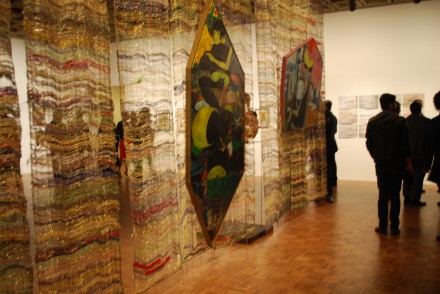 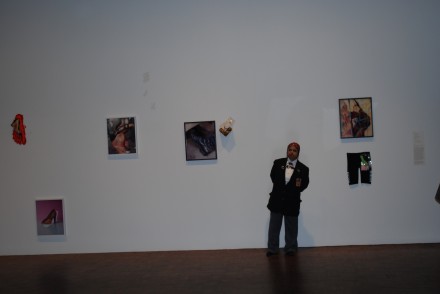 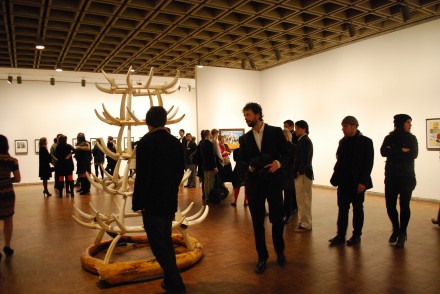 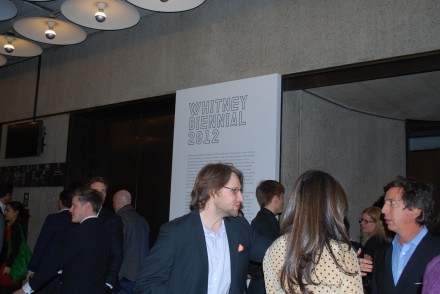 This entry was posted on Thursday, March 8th, 2012 at 4:24 pm and is filed under AO On Site, Art News, Go See. You can follow any responses to this entry through the RSS 2.0 feed. You can leave a response, or trackback from your own site.