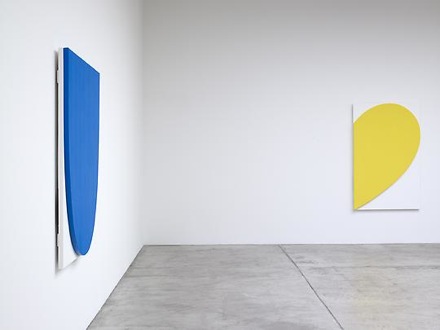 Ellsworth Kelly‘s installation of four 2-panel paintings executed this year is on view at Galerie Marian Goodman in Paris until July 13, 2012. The show, as the gallery’s press release relates, is his first in Paris in 20 years, when his formative paintings made in his youthful residence in the city were exhibited at the Galeries Nationales du Jeu de Paume. This new work comprises four paintings, each consisting of a curved geometrical relief on a white panel, progressing on the ordered spectrum from red, yellow, blue, to green. Laconically hung a single panel to each of the four walls in the gallery, the paintings seem a further distillation of Kelly’s painterly system, a continuation of the experiments he first executed in Paris in his early years. 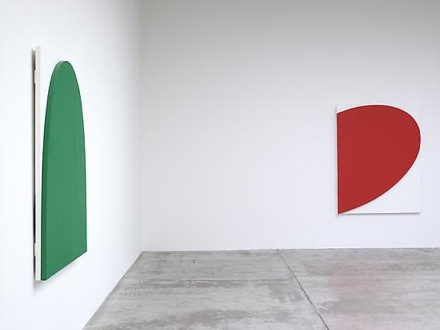 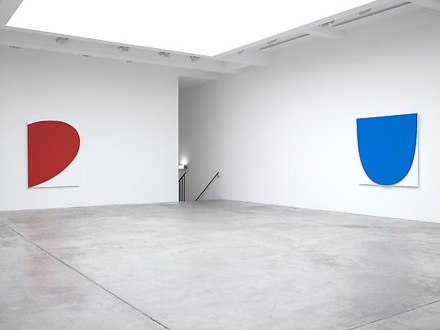 Those early paintings, of course, have a well-deserved place in the canon of twentieth century art history. The critic Yve-Alain Bois‘s landmark essay “Ellsworth Kelly in France: Anti-Composition in Its Many Guises” traced the artist’s early work as a student in Paris, from his reduced representations of sources in nature to his aleatory compositions that culminated in his never-executed mural for the Museum of Modern Art, Colors for a Large Wall of 1951. After this, theoretical circles associated him with the likes of John Cage, Jasper Johns, Robert Rauschenberg, up to Frank Stella, tracing his genealogy back to the historical avant-garde. 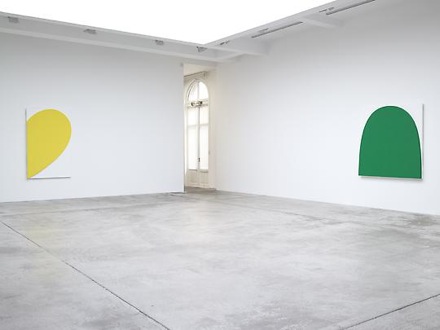 The paintings on view here continue Kelly’s interest with the curve as an iconic distillation of figurative sources, such as the body or of a curtain, an interest that originated in his early sketches of nature. The relief aspects provides them a way out of the trappings that they might otherwise have as pure paintings, affording them associations with anti-compositional devices. Although the relief is shallow, it functions in a way similar to the wide stretchers of Frank Stella’s paintings, to separate the paintings from expressive models of interpretation. 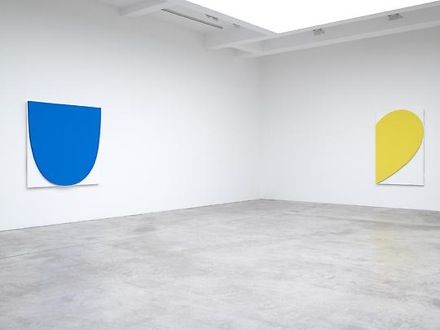 The progressive color scheme also functions similarly. It also brings Kelly’s new paintings into a deep ancestry of reductivist color painting, including Alexander Rodchenko, Kazimir Malevich, Barnett Newman, Judy Chicago, and Robert Irwin. This is naturally par for the course with Kelly, but here the effect is particularly subdued. The soft geometrical curves play off each other from the gallery walls and disarm the ordered progression of colors, making the progressive aspect less obvious for the viewer. Concise in every aspect, the paintings are a welcome space of subtlety in an obstreperous contemporary painting scene. 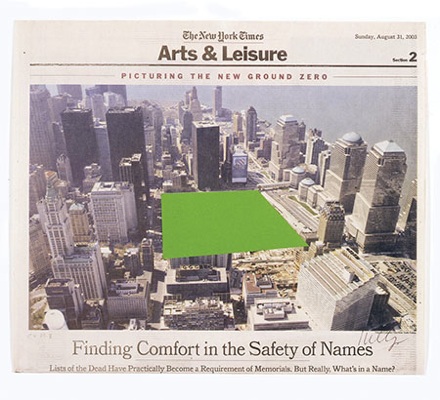 Last year, Kelly’s Ground Zero, a front-page newspaper showing the aftermath of the September 11 attacks with ground zero covered with a trapezoidal green square, was exhibited in PS1’s September 11 exhibition. That work used similar strategies to the paintings on view at Marian Goodman, but for very different effect. With his commemorative work on 9/11, his abstract structure–modeled off the actual trapezoid of the World Trade Center site–became representational, as the green trapezoid represented Kelly’s proposal to cover the site with grass. Abstract chance composition transformed into a memorial.

Considering that Kelly’s Ground Zero took as its topic New York, a city where his career faced a continually more frustrating reception than in Europe, perhaps it’s fitting that in his return to Paris he would execute works of a more reflective, nearly retrospective nature.

This entry was posted on Thursday, July 12th, 2012 at 5:38 pm and is filed under Art News. You can follow any responses to this entry through the RSS 2.0 feed. You can leave a response, or trackback from your own site.