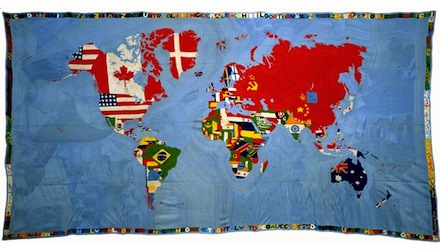 On view at the Museum of Modern Art through October 1, “Alighiero Boetti: Game Plan,” is an ambitious retrospective that explores both the chronology and the conceptual development of an artist who was engaged in many of the most important currents of twentieth century artistic practice. Until this year, Boetti (1940-1994) had not had an exhibition of this scope outside of Italy. MoMA’s current show, organized in conjunction with the Museo Reina Sofía in Madrid and the Tate Modern in London and curated by Christian Rattemeyer, offers a fresh look at Boetti’s oeuvre and makes a convincing argument for his originality and continued importance. 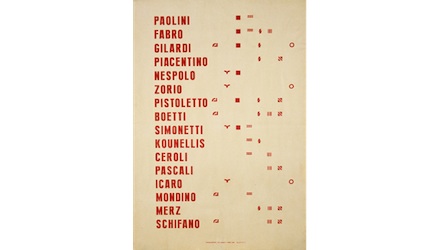 “Game Plan” is organized largely chronologically, charting Boetti’s career from its beginnings in Turin, Italy, his hometown. In the early 1960s, he worked closely with a group of artists based in Turin, including Michelangelo Pistoletto, Mario Merz, Giulio Paolini and Luciano Fabro, all prominent figures in the Arte Povera movement along with Boetti himself. Literally translating to mean “poor art,” Arte Povera represented a radical departure from established norms of artistic practice. Artists investigated unconventional materials and approaches and committed themselves to upending the commodity-based art establishment. Although Boetti’s work would shift away from Arte Povera, the movement’s foundational ideas remained an important current in his work. 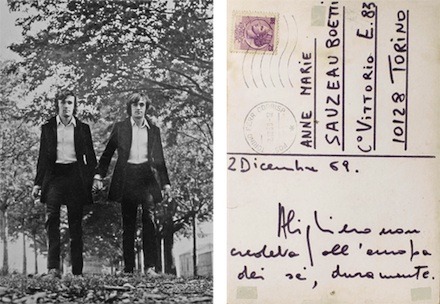 Boetti was known for his conceptually challenging – yet often cheeky – engagements with the signs, systems and conventions that govern the ways in which we communicate, classify, measure distance and mark time. In his famous Viaggi Postali, begun in 1969, Boetti addressed envelopes to fellow artists, well-known art world personalities, as well as friends and family, using fictitious addresses that created imaginary travel itineraries and evoked a sense of narrative through correspondence. The envelopes on view present a whimsical “who’s-who” of prominent members of the late-1960s artistic community, all set in exotic locales. Boetti himself often questioned how artistic identity is constructed and maintained, at times adopting the personae of two different artists, one named “Alighiero” and the other “Boetti.” 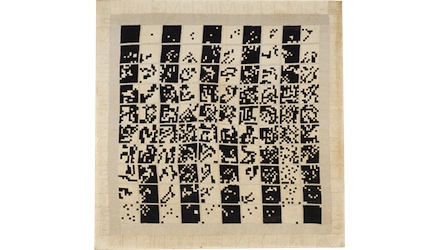 Alighiero Boetti. Alternando da uno a cento e viceversa (Alternating from one to one hundred and vice versa). (1977-78).

As a fundamental artistic act, drawing served as a key point of inquiry for Boetti and functions as an important signpost in this exhibition. Boetti’s often minutely detailed works on paper represent an interesting visual foil to his sculptures and more boldly graphic or conceptual works. However, the idea of drawing as an evocation of process permeates Boetti’s entire body of work. Engaging with questions of time and efficiency, Boetti often tried to make his drawing process as inefficient as possible, to waste labor and effort. The results are staggeringly precise and delicate, revealing an artist who never lost interest in his craft, his materials and the act of making. 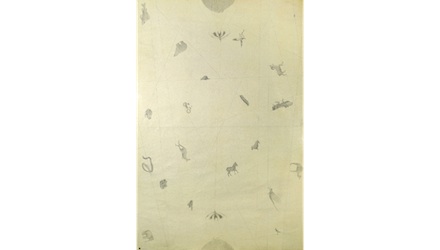 Boetti was also actively interested in global politics. He visited Kabul, Afghanistan frequently in the 1970s and 1980s, collaborating with local artisans to create his famous woven works such as the Mappe (Maps; created from 1971 until his death in 1994, more than 150 in total) and works that explored language, symbol and narrative. In Oggi dodicesimo giorno sesto mese anno mille novecento ottantanove (Today the twelfth day of the sixth month of the year nineteen eighty-nine), the Italian words and letters are literally interwoven with with Persian texts added by the Afghan weavers on Boetti’s suggestion. The script combines Afghanistan’s modern political narrative with verses from fourteenth-century Sufi poetry. Collaborative, multi-layered and literally polyvocal, the work and others like it demonstrate the far reach of Boetti’s interests, and the important role chance played in his work. 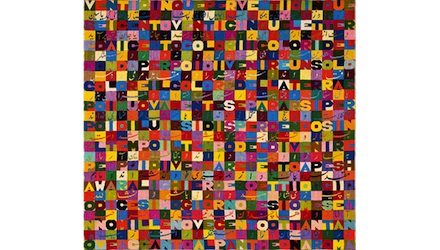 This entry was posted on Monday, September 3rd, 2012 at 5:15 pm and is filed under Art News. You can follow any responses to this entry through the RSS 2.0 feed. You can leave a response, or trackback from your own site.