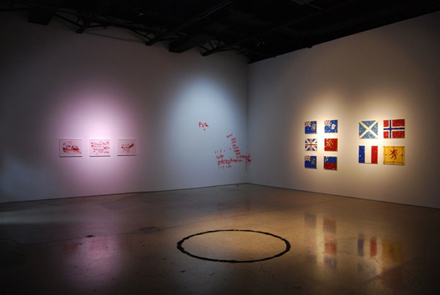 Currently on display at 303 Gallery is a collaborative exhibition of work by Kim Gordon (of the band Sonic Youth) and Karen Kilimnik. It is Kilimnik’s eleventh time exhibiting at 303 and Gordon’s second. Upon entering the gallery, one is submerged into a dimly lit and twinkling underworld of subculture that is examined through film, painting, performance and installation. 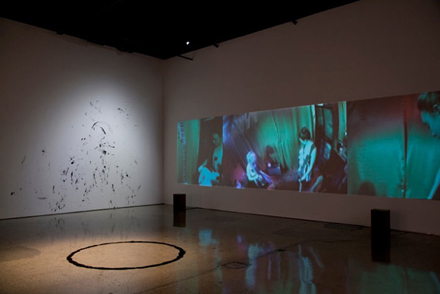 Image: Installation View with Kim Gordon’s Proposal for a Dance at 303 Gallery

The largest piece in the show is Gordon’s Proposal for a Dance – an aerial and disorienting video of two female rockers with guitars and wearing Rodarte dresses. The film is projected to near cinema-size, allowing viewers to feel as though they are part of a private audience. The sound is messy, raw and iconic – evoking stadium rock and decades of rock-and-roll pop culture. It as if this film could have been made yesterday… or thirty years ago. Continuously looped and with a short duration, it has a dizzying affect akin to a roller coaster ride. 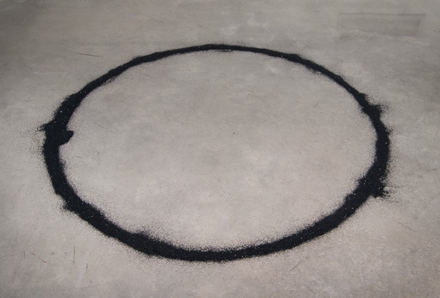 Positioned in front of the film, there is a sparkly, inky black circle, aptly titled Black Glitter Circle by Kim Gordon. It seems to function as a portal for the viewer, delineating the perfect position from which to view the performance, while emitting an alchemic and pagan feeling. While observing the video, spectators did dance in and out of the circle, taking care not to touch the glittering edges.

Karen Kilimnik’s film, Bananarama Guilty also deals with female rock stars as its subject matter. However, the quality of the video is fragmented and blurred to the point of ghostly recognition. Only when the viewer puts on the provided headphones does one hear the interview and performance of the band, conjuring imagery out of the speckled masses on the screen. 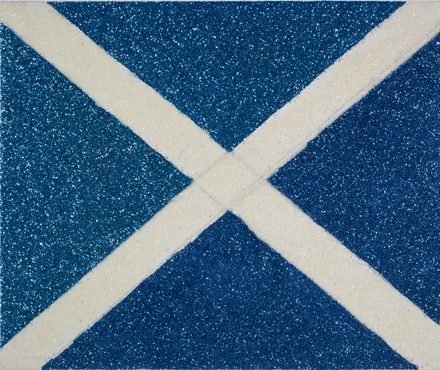 Karen Kilimnik’s ten glitter paintings adorn the walls with sparkles. They hail allegiance to various countries with the use of flag iconography, although their titles (all prefaced with My Judith Leiber bag...), as well as their media, suggest a more cheeky subject matter. The paintings are relatively small and are installed in an orderly, grouped fashion that creates a certain magnetism, which is perhaps due to the paintings’ transition into a light source via the illuminating and reflective qualities of their surfaces. 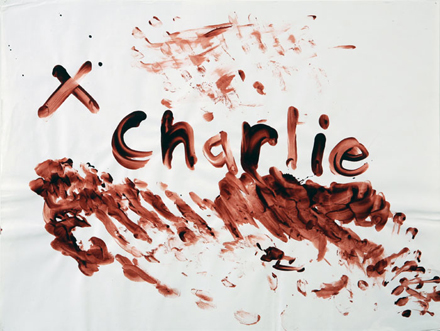 In contrast to the neat and luminescent paintings by Kilimnik, she also has a collection of very aggressive text paintings. Each of them is red – with heavy-handed, scrawled and primal mark-making. Three are on paper, and one is smeared in the corner of a gallery wall. They all reference the Charles Manson murders in some fashion, directly through text or sign – one with a bloody peace symbol. 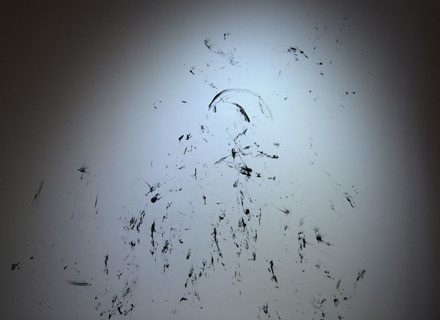 In tow with this bodily and impulsive style of painting is Gordon’s third piece entitled Tight’s painting. Also executed on the wall, it is a paradox – an airy mass of black marks, made with tights. The breathiness of the marks, coupled with the weight of the black coloring, provides an interesting dichotomy.

Conceptually, the show touches on darkness, performance, enchantment and glamour. It has a youthful and timeless sense of angst to it, capturing the essence of its musical inspiration.

This entry was posted on Wednesday, September 26th, 2012 at 4:13 pm and is filed under Art News, Go See. You can follow any responses to this entry through the RSS 2.0 feed. You can leave a response, or trackback from your own site.