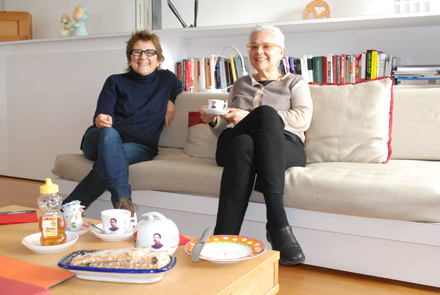 The following an interview with Liliana Porter, November 14th, 2012, by Anna Mikaela Ekstrand for Art Observed:

As Liliana Porter received me in her West Village pied-a-terre for our interview, she asks, “hablas español?” The apartment is light, airy and sparsely decorated with objects such as a Claes Oldenburg pretzel on a shelf and a Richard Artschwager exclamation mark on a wall. As we walk to the window, Porter points out highlights of the view; the Chrysler building to the left and perhaps of more interest the rooftops and a garden beneath, belonging to Donna Karan “where she throws crazy parties”. Looking down it feels like we are on the balcony of a theater. 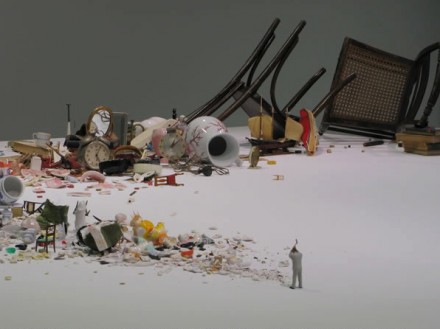 Porter has been selected as this year’s “invited artist” at Pinta New York – The Modern & Contemporary Latin American Art Show, running from November 15th-18th, 2012. Porter is Argentine, but based in New York since 1964, and currently working in a studio in Rheinbeck. Recently she was exhibited in a show at The New Museum, where curators Annie Fletcher and Tobias Ostrander exhibited her work alongside deceased artist Marcel Broodthaers as part of the “Museum as Hub” series. 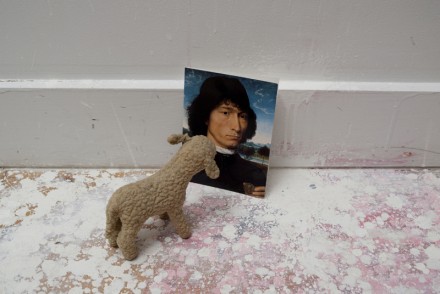 Liliana Porter, Situation with Memling’s Portrait of a Man, 2012, courtesy the artist

Coffee is served by Ana Tiscornia, with whom Porter is currently collaborating on a show that will open in Uruguay. Their collaboration is a “juxtaposition” whereby they merge their art together, rather than both working within the same creative process. Porter explains this concept, pouring coffee at a table that begins to resemble one of her installations. The coffee was brewed in an oversized Moka Pot (of Chinese construct, they say, and chuckle when it doesn’t pour well), served in a tea set adorned by the face of Mao; the honey bottle is in the shape of a bear. Porter exclaims that the milk jug in the shape of a bird is a little bit “rude”. As I pour the milk it flows out of its beak and our interview begins with a laugh. 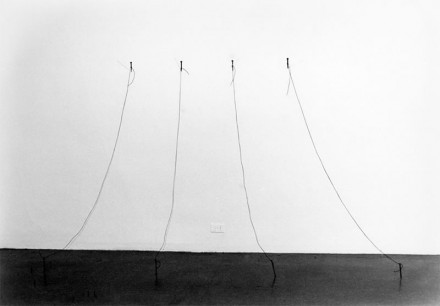 ARTOBSERVED: Congratulations on being an invited artist at Pinta. Have you had any earlier involvement with Pinta?
PORTER: Well I have showed with them since their first art fair.

ARTOBSERVED:When you say you showed do you mean through galleries?
PORTER: Yes through galleries. Ruth Benzacar from Buenos Aires and Hosfelt Gallery from New York. I also showed in London, but did not go personally, through Galeria Espacio Minimo, my gallery in Madrid.

ARTOBSERVED: You came to New York from Argentina quite young, you were 23?
PORTER: I was 22. 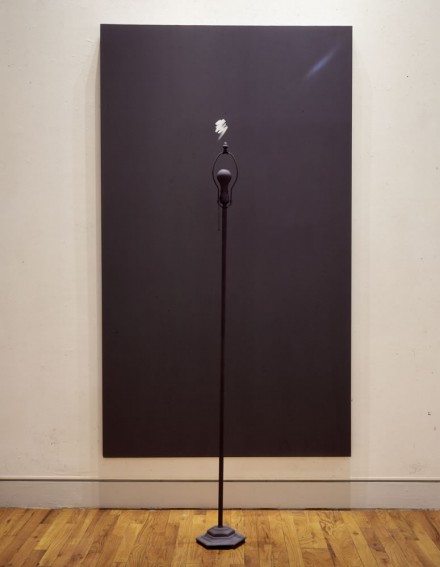 ARTOBSERVED: Is your work received differently in South America in comparison to North America?
PORTER: It is difficult to say because most of my work I have created here, since I came very young. But since I came to New York I have always continued to show my work in Latin America and Europe. I think different contexts receive your work in different ways because there are cultural differences that make the work read differently. I think this is more clear in my videos, because the videos include a lot of things that only an Argentinean can understand. But at the same time an Argentinean living in New York will also understand. 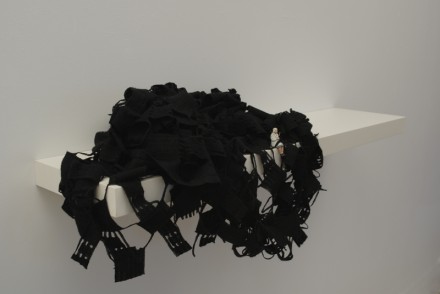 ARTOBSERVED: When you say ‘things’ do you mean cultural references?
PORTER: Cultural references or like in one of the videos there is a little fragment called the Argentine coro. You know when they sing – the Argentine choir. If you have heard it in Buenos Aires and you then hear it again the sound will trigger a lot of memories and other things – emotions that would be impossible for North Americans to have. But it doesn’t matter really. Not to the whole context of the work. I remember when I was in Buenos Aires as an adolescent; we used to dance to American songs. We probably didn’t understand the words or anything but it didn’t matter because you sort of invented them. It becomes your own experience. It does not matter if Frank Sinatra was born here or there. You perceive the song through your own lens. It is difficult to say. I continually have the chance to show in Latin America and here so in some sense I feel that I am able to bridge cultural perceptions and communicate over boundaries. 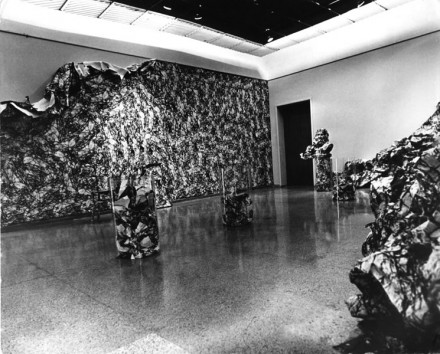 ARTOBSERVED: When you show in Latin America are you perceived as an Argentinean artist or an Argentinean/American artist?
PORTER: I have made it a point – I think more as an Argentinean artist that lives in New York. This is a personal decision that springs from instinct. I feel Argentinean. What it means is that I speak in Spanish. I have an accent when I speak in English. I believe that all your early perceptions define you. For example every time you compare architecture you will think of the first house you saw when you were four years old, in my case it was in Argentina. I really feel that those experiences become points of reference that follow you throughout your life.

ARTOBSERVED: You have held teaching positions throughout your career; at the New York Graphic Workshop, Porter-Wiener Studio, the Printmaking Workshop, SUNY Purchase and State University of New York at Old Westbury and Queens College. How has teaching affected your art practice?
PORTER: Well yes, I actually co-founded the New York Graphic Workshop with Luis Caminitzer who was also my husband for 12 years and I was at Queens College for 15 years. I enjoy teaching. Working with young people is interesting because it keeps you current with the world and what’s going on. They have a different perspective on things.

ARTOBSERVED: In much of your recent work, photography, installation and video, you make use of small toys and figurines. How do you make a selection?
PORTER: When I visit my regular shops and flea markets no one knows exactly what I am collecting, not even myself. I buy many different pieces from different eras, but actually most of my pieces come from the 50’s. Maybe that has to do with my childhood. In my work I put different pieces together, I don’t know how but I always seek harmony in between the pieces.

ARTOBSERVED: When I first saw them, Claes Oldenburg’s Mouse Museum sprung to mind; however the knick-knacks he presents are inanimate objects, more of a commentary on collecting, or memory, sometimes childlike — whereas the individual objects in your “theatrical” vignettes can easily be attributed with human emotion, like in your Dialogue Series or your Further Away pieces. Can you discuss the idea of the toy a little bit?
PORTER: To a child toys are very important; they store many emotions in them. Adults have a different way of perceiving things but I think that they are still able to think the same way. There is something strange that happens when we interact with the pieces. We sort of empathize with the objects-we relate or something. It’s like in general when you read a certain book, you will do so because you thought of those ideas before, or you wanted to hear them or, it has something that is very personal. You already knew a part of its content. It is when you recognize that part that you say ‘aha’. Many of my characters are very childlike in the way that they are naïve; they exhibit raw emotion which we easily pick up on. 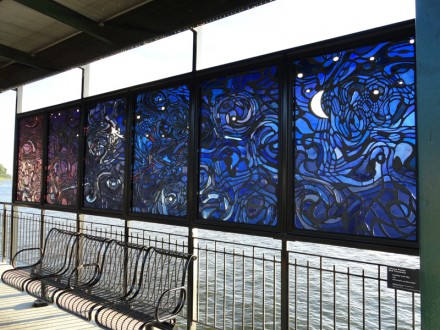 ARTOBSERVED: In your studio where do you store your toys and your figurines?
PORTER: It is a barn. The first floor is the messy part; the machines are there. The upstairs is the good-looking part; the computers are there are shelves and how do you say those things with doors – cabinets. There are cabinets full of them. Many have not yet acted and others have acted many times. They are sort of famous [Laughs]. Actually now at Pinta I am presenting an installation, it is not The Man with the Ax it is another one called To Clean Up/Sweep it is a woman or a man actually that is cleaning up a mess of things. Many of the things are elements that were in my videos or photographs. You know, the lady was difficult for me to let go of [Chuckles].

ARTOBSERVED: Could you imagine scaling up, working with larger objects such as mannequins?
PORTER: I was thinking of scaling up with people. I am thinking of doing it eventually I hope I will – I have been announcing this forever. I imagine some kind of performance or a a theatre piece that is made the same way I make video. When you say theatre it sounds very important, I mean to do it in a more domestic way. Then using people and objects. If it’s a theatre it will be a performance, in person. This would probably also trigger video, or I would video to document it. 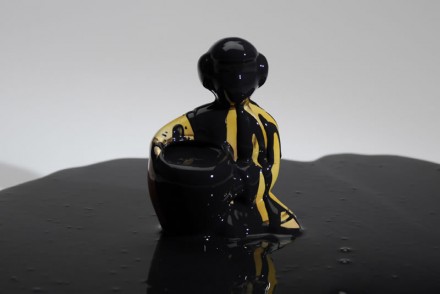 ARTOBSERVED: A visual from your video pieces that impacted on me is the red paint flooding downwards carrying soldiers in its wake. Can you tell me a little about this piece?
PORTER: Ah yes, Matinee from my last series in 2009. It is again made up of fragments of different things. it relates a lot to a series of paintings I made. I called them tsunamis – where waves carried all kinds of different objects. I thought of TV when you watched all these different situations unfold; ecological disasters, war, something terrible like a whole town being destroyed which then directly was followed by a soap opera or something. I think that the fragment is the opposite of what you are seeing which I like a lot. I love the simultaneity. I really think it made the piece more sad. Like when she is singing and everything is beautiful, at the same time you see all the black. That possibility of simultaneity is what is really cruel. Like when someone dies, a friend of mines wife died and he was saying that for him the worst thought was that sometime in the future he would be able to be happy or to smile. That is a cruel feeling. 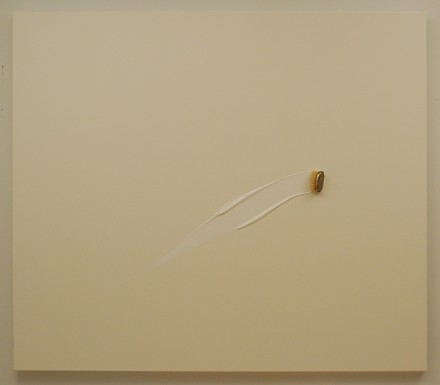 ARTOBSERVED: How would you place your own work in an art historic canon, and why?
PORTER: It would be very presumptuous of me to put that together. That’s a great question. No idea! Let’s see, it is difficult to see myself. I don’t know. I wouldn’t know how to answer that. Art history is an invention. It is a narrative invention. We don’t know if eventually it will change, instead of it being so arbitrary – because I think it is very arbitrary – it will become more plural, yes less linear. It’s like time. For that to happen you need a lot of political changes in the world.

ARTOBSERVED: Well then. For an answer to this question we may have to seek out an American art historian!
PORTER: It is true because in general the countries that have that write history or at least where people are published and people read it are the countries with power, economic power. However there are important artists working in other places. People are more aware, after postmodernism that different things happen at the same time. Earlier with the concept of the avant-garde there was a focus on who did it first, those who did things first in general were in the right place at the right time. Those got into the Artforum but I think that now thanks to browsing the Internet people are more aware of the vastness of reality. They travel more, through technology and there is a desire to make connections.

This entry was posted on Thursday, November 15th, 2012 at 4:59 pm and is filed under AO On Site, Art Fair, Go See. You can follow any responses to this entry through the RSS 2.0 feed. You can leave a response, or trackback from your own site.