May 17th, 2022
REFERENCE LIBRARY
Home » AO On Site Miami Beach – The Wolfsonian: FIU ‘Postcards of the Wiener Werkstätte: Selections from the Leonard A. Lauder Collection’, ‘Esther Shalev-Gerz: Describing Labor’ and ‘Art and Design in the Modern Age’ Friday, Dec 7th, 2012

AO On Site Miami Beach – The Wolfsonian: FIU ‘Postcards of the Wiener Werkstätte: Selections from the Leonard A. Lauder Collection’, ‘Esther Shalev-Gerz: Describing Labor’ and ‘Art and Design in the Modern Age’ Friday, Dec 7th, 2012 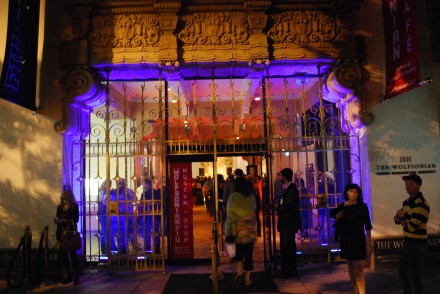 Exterior View, Wolfsonian FIU. All photos by A. M. Ekstrand for ArtObserved

On Friday, December 7th, 2012, the Wolfsonian Museum at FIU held a reception for its shows on view:  “Postcards of the Wiener Werkstätte: Selections from the Leonard A. Lauder Collection”,  “Esther Shalev-Gerz: Describing Labor” and “Art and Design in the Modern Age: Selections from the Wolfsonian Collection”. The exterior of the Mediterranean-revival style building recently underwent conservation and its dramatically lit 1926 cast stone façade welcomed invited guests. 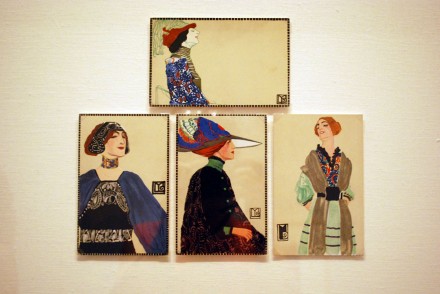 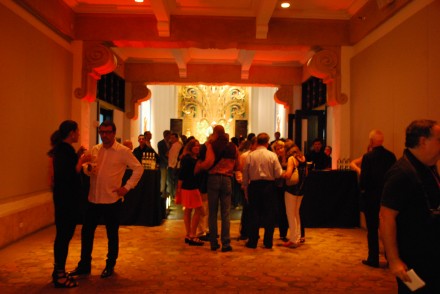 The Wolfsonian FIU is a museum, library and research center focused on the social and historical presentations of art and design, and is located on Washington Avenue in South Beach. Its collection is comprised of over 120,000 objects from 1885 to 1945. The event was hosted by the museum’s director Cathy Leff; a DJ was playing in the lobby where drinks were being served to a full house. 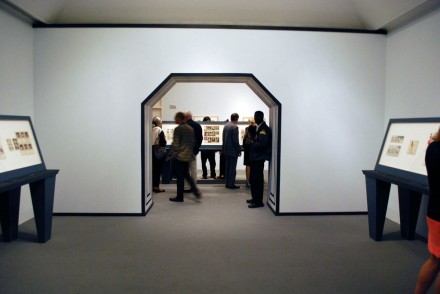 The Wiener Werkstätte (Vienna Workshop) was a cooperative of artists and artisans founded in 1903 by architect Josef Hoffman and painter designer Koloman Moser. The organization’s principles were rooted in the Arts and Crafts movement, with a mission to dissolve boundaries between “high” and “low” art as well as to adhere to the notion of Gesamtkunstwerke, the creation of a fully-integrated  design environment. Every aspect of life in the cooperative was to be premeditated with a strong attention to quality and the project as a whole. Its client base was mainly artists, progressives and open-minded, financially elite supporters of the Austro-Hungarian Empire. 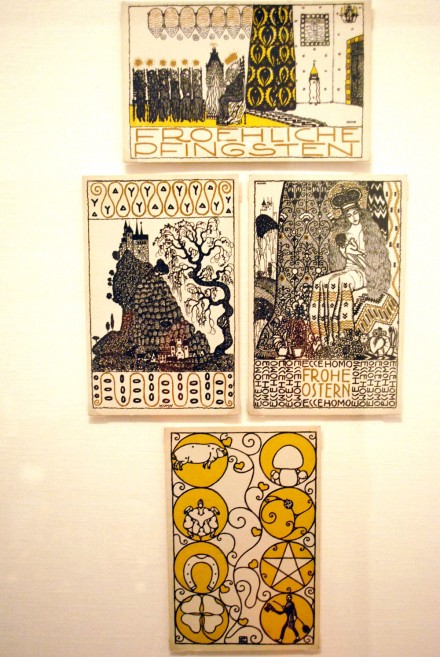 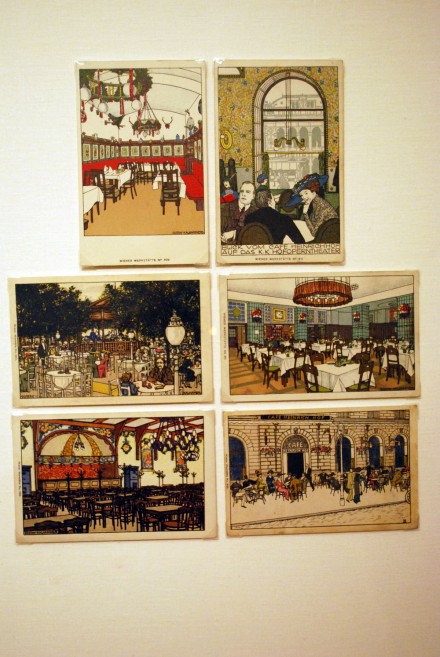 The exhibition, “Postcards of the Wiener Werkstätte: Selections from the Leonard A. Lauder Collection” was conceived by the Neue Galerie New York. Its decorative arts curator, Christian Witt Döring, in conjunction with Leonard A. Lauder’s gift of nearly 1,000 post cards to the collection, helped realize the exhibition. Mr. Lauder, who is the brother of one of the founders of The Neue Galerie, Ronald S. Lauder, has made several donations to the Wolfsonian-FIU. Currently, the Museum of Fine Arts Boston is also showcasing selections from his postcard collection in “The Postcard Age: Selections from the Leonard A. Lauder Collection.” 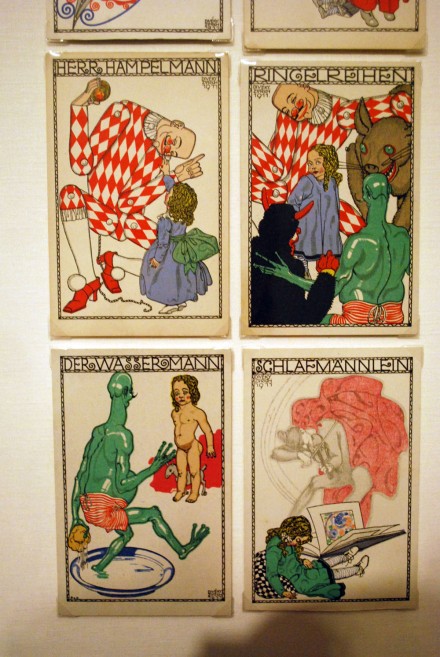 The cards were designed to appeal to a variety of audiences of different ages, genders and interests. Some cards were humorous; others aesthetically pleasing or satirical and hideous. Together they represent a vivid portrayal of the life, architecture, fashion and politics of Vienna during the turn of the century.

On view on the museum’s seventh floor are a selection of these postcards showcased in clusters by relevance as well as by artist. The Wolfsonian-FIU has choosen to complement the postcards with Wiener Werkstätte textiles, decorative arts and printed material form its collection. The postcards of the Wiener-Werkstätte were very profitable and continue to be in demand as collector’s items. 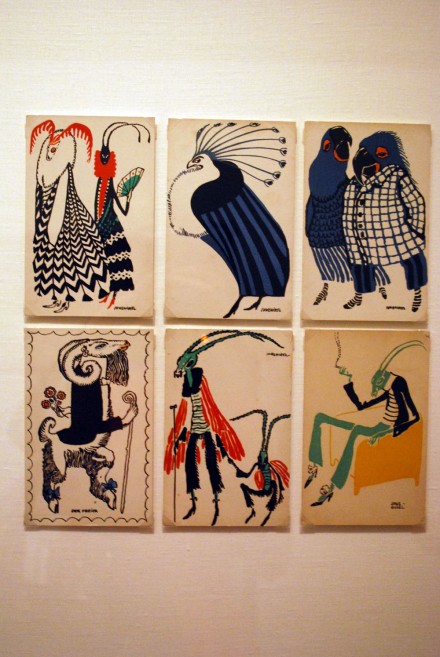 Most of the objects produced in the Wiener Werkstätte were stamped with one or a number of different marks; the trademark of the Wiener Werkstätte, the monogram of the designer and that of the craftsman who created it. These stamps are especially interesting to compare on the postcards and framed textile samples. 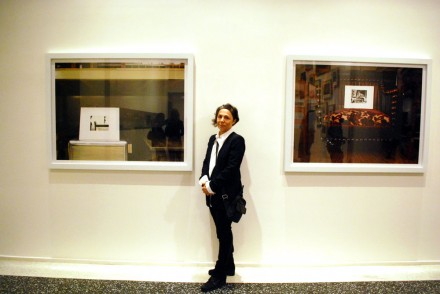 Also on view was a new exhibition of a different character, yet also revolving around the theme of production and the way in which it is executed. “Describing Labor” is an exhibition by Esther Shalev-Gerz, following her 2011 residency at the museum. Shalev-Gerz has through new works of video, audio and photography explored the notion of labor by using objects relevant to the theme in The Wolfsonion-FIU Collection as well as objects from the Mitchell Wolfson Jr. Private Collection, and the Martin Z. Margulies collection as a starting point.

Shalev-Gerz has been based in Paris since 1984, born in Lithuania raised in Israel. Her work often explores relationships between experiences and their recounting; collective memory, the transformations of identities and their histories. Shalev-Gerz creates commentary with contemporary relevance on the selected historical objects and notion of labor. 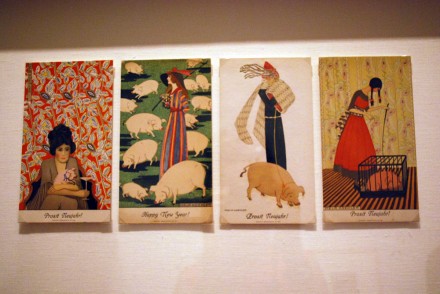 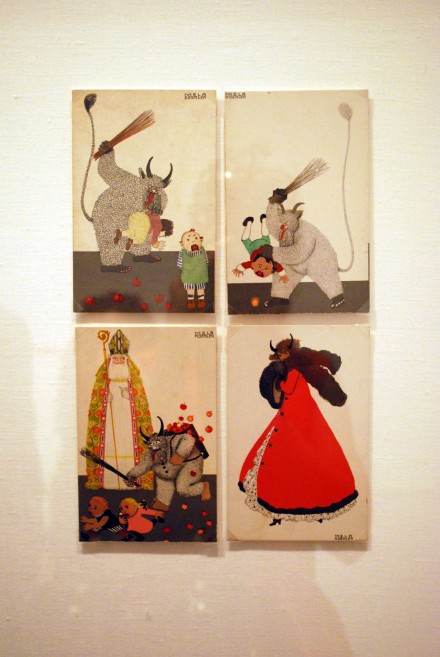 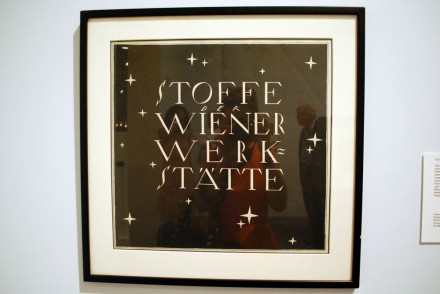 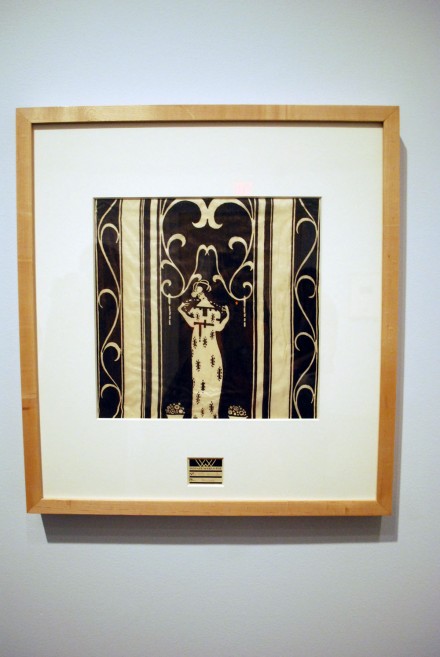 “Art and Design in the Modern Age: Selections from the Wolfsonian Collection” is an ongoing exhibition that provides an overview of design reform movements, urbanism, industrial design, transportation, advertising and political propaganda, showcased through a selection of the museum’s holdings of American and European artifacts from the late-nineteenth to mid-twentieth centuries.

Links:
[Wolfsonian Museum]
The Independent: [“South Beach: Deco delights on a South Florida stroll“]
The Examiner: [“Postcards of the Vienna Workshop at The Wolfsonian, FIU“]

This entry was posted on Monday, December 10th, 2012 at 11:26 am and is filed under AO On Site, Art News, Go See. You can follow any responses to this entry through the RSS 2.0 feed. You can leave a response, or trackback from your own site.