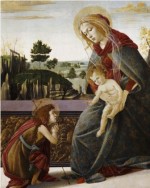 Christie’s will offer Sandro Botticelli’s “Madonna and Child With the Young Saint John the Baptist” in Hong Kong next month. The work has a presale estimate of $5 million and should be an indicator of interest in a non-Christian Eastern market. The auction house is hoping that the subject matter could translate as a emotional scene between mother and son. Ken Yeh of Christie’s Asia stated that “When you spend that kind of money, you have to think about resale value,” he said. “It’s no longer just to decorate your house.” Read the article via The WSJ

This entry was posted on Friday, December 21st, 2012 at 10:42 pm and is filed under Art News. You can follow any responses to this entry through the RSS 2.0 feed. You can leave a response, or trackback from your own site.