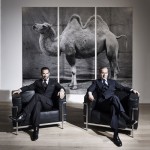 Simon de Pury and collector Robert Tomei discuss their obsession with design as a harbinger of the contemporary market: “Collecting design is quite a new phenomenon,” he says. “In the past, collectors rarely attempted to buy great design as well as great art. Robert, though, is passionate about both, but he doesn’t take himself seriously. His collecting is all done in a spirit of fun, with a genuine interest and curiosity”, says de Pury. Tomei began by collecting video installations form the 90s and owns work by Maarten Baas, Piet Hein Eek, Sebastian Brajkovic, Rolf Sachs, Olafur Eliasson and Elmgreen & Dragset, among others.
Read the article via The Financial Times

This entry was posted on Thursday, December 13th, 2012 at 2:00 pm and is filed under Art News. You can follow any responses to this entry through the RSS 2.0 feed. You can leave a response, or trackback from your own site.