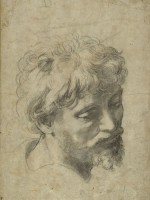 In a record-breaking auction, the black chalk “Head of a Young Apostle” by Raffaello Sanzio (Raphael), sold Tuesday, December 4th, 2012 for $47.8 million. This is the highest price paid for any work on paper, and the second highest for any Old Master, after Ruben’s “Massacre of the Innocents” which raised $78.2 million at Sotheby’s in 2002. The highest bidder was Natasha Mendelsohn, who bids on behalf of clients for Sotheby’s (BID) London.

This entry was posted on Thursday, December 6th, 2012 at 10:16 am and is filed under Auction Results. You can follow any responses to this entry through the RSS 2.0 feed. You can leave a response, or trackback from your own site.