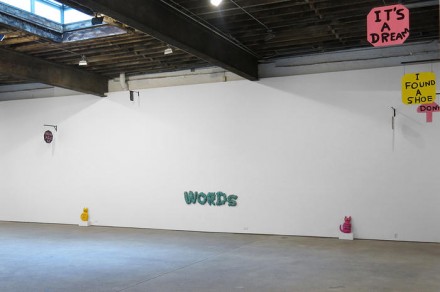 Blending the mundane and the morbid with a healthy sense of humor and cultural subversion, David Shrigley has been producing his particular blend of cartoonish satire for over 20 years.  Trained as a sculptor, the artist has also produced a trove of ink drawings, animations and other projects that showcase his brand of wit and empathy, exploring neurosis, mortality, absurdity and even the art world itself. 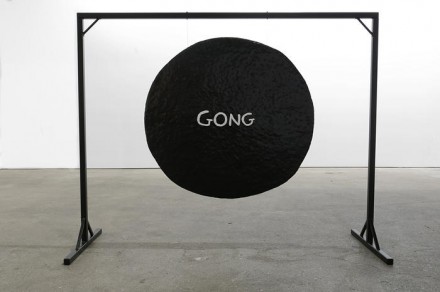 Art Observed had the chance to sit down with Mr. Shrigley at the opening of his new show, Signs, on Thursday, January 10th at Anton Kern Gallery in Chelsea.  Consisting only of wall mounted signage and an enormous black gong that gallery staff would occasionally ring without warning, the show showcased Shrigley’s exploration of cultural forms, and his interest in the subversion of meaning through a mix of recognizable symbols and his own absurdist humor. 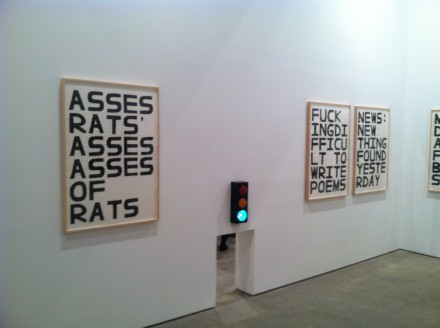 Art Observed: Your work seems to pull broadly from contemporary culture.  Is there any sort of recording or note-taking process before sitting down to create?

David Shrigley: No, not really.  I usually just start with a blank sheet of paper, or I decide to just do something, like this show is supposed to be a show of signs, so I just made the signs.  I tend to think about it after I’ve done it, and the stuff that seems to work I put in the show.  The stuff that doesn’t, I just toss in the garbage. 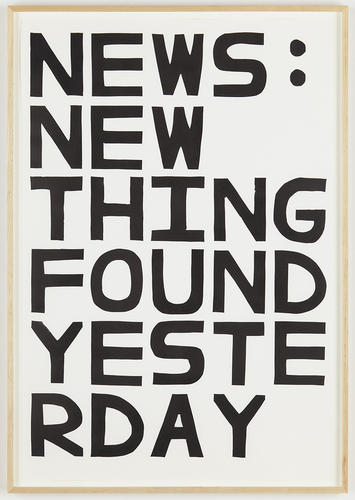 AO: With regards to the Highline Billboard that you did last year, did you have any specific motivation for putting that specific work up?  Was that made specifically for the billboard?

DS: It was an existing image, so I just adapted it for the billboard, but I had a few images in mind.  I decided on that image specifically because people in New York tend to be so neurotic, particularly the ones in Manhattan.  I thought that was the most neurotic drawing that I had done from that selection, so I chose it. 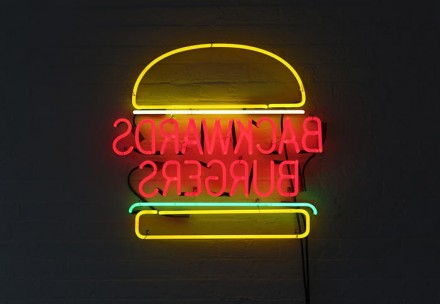 AO: I understand that this is your first show doing only signs, correct?

DS: Yes, it’s a very specific project. Anton (Kern, gallery owner) said in his very scatological way that he has of speaking: “let’s do a show of signs, that would be fantastic.”  Then come September he asked me: “What’s the show going to be?”  So when I told him it would be a show of signs he said: “What?  If you want to, that sounds fine.”  But it’s nice to have a starting point, and that was the starting point for the show.  I guess I’ve made a lot of shows of whatever stuff I had made, so it was nice to have a starting point, for better or worse.  I feel like it’s a better exhibition without necessarily being better art.

AO: You’ve done some video work in the past, can we expect more in the future?

DS: Yes, I make a lot of films actually. I work with an animator in the south of England, and we usually make at least two films a year.  So we’ll definitely make another film.  I’ve just written a script for a longer piece, but we’ll see.  It’s much harder to make longer works, but yes, I’ll definitely continue to make films. 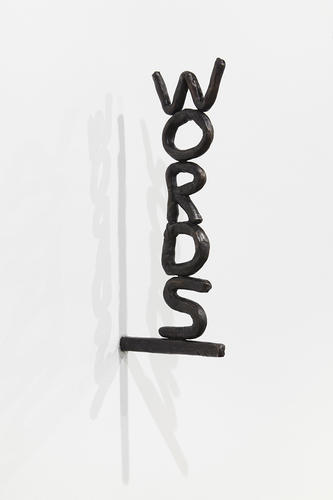 This entry was posted on Saturday, January 12th, 2013 at 12:09 pm and is filed under Art News, Go See, Interview. You can follow any responses to this entry through the RSS 2.0 feed. You can leave a response, or trackback from your own site.

One Response to “AO On-Site Interview – David Shrigley at the Opening of “Signs” – January 10th, 2013 at Anton Kern Gallery”