How Biological Studies Can Help Understand Reactions to Art 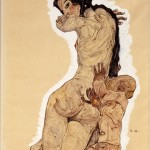 The New York Times has published a short feature by neuroscientist Eric R. Kandel, showing the links between the biological composition of the brain and the viewer’s understanding of art.  Using the turn of the century works of Egon Schiele, Gustav Klimt and Oskar Kokoschka as his example, Dr. Kandel illustrates how these particular works activated certain cells in the brain, causing a powerful emotional reaction.  New studies, such as the bold brain mapping project announced by President Obama this month, would continue to extend studies of the brain and its reactions to creative stimulus.

This entry was posted on Sunday, April 14th, 2013 at 4:20 pm and is filed under Art News. You can follow any responses to this entry through the RSS 2.0 feed. You can leave a response, or trackback from your own site.