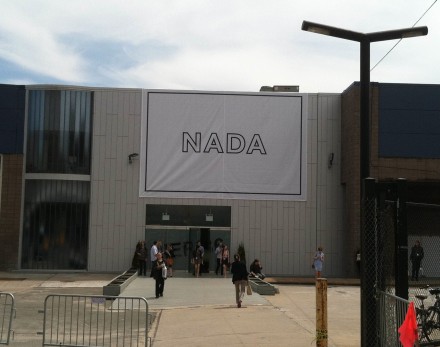 Outside the NADA Art Fair

The NADA Art Fair opened yesterday for its second annual New York event, bringing over 70 galleries and exhibitors to downtown Manhattan’s Basketball City for a diverse exhibition of new works by artists around the globe. 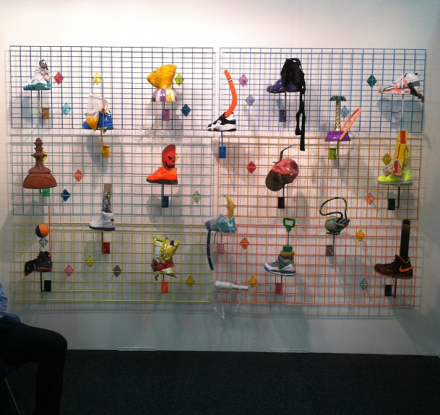 Located almost directly under the FDR Parkway at the southernmost tip of Manhattan, NADA’s new location looked to capitalize on the nearby ferry to Randall’s Island, and the concurrent Frieze Art Fair.  The expansive court floors, covered with carpeting, offered a wealth of space for the young fair, and many galleries seized on the opportunity, installing several large-scale sculptures on the outskirts of the rows of booths.  Artist David Shaw exhibited his peculiar, iridescent metal work Collider, which gleamed as visitors passed around and through its open framework.  In another corner, artist David Brooks hung a series of abstracted rooftops, challenging the interrelation of architectural space and form. 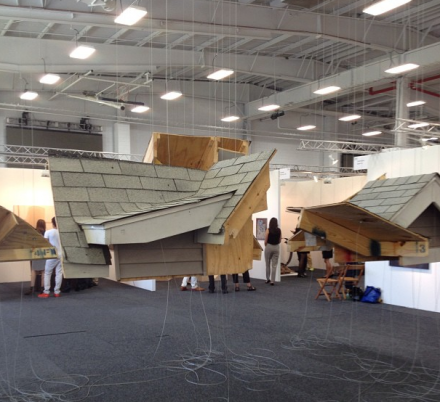 But for sheer imagination, few could top the installation by collaborative duo Merkx and Gwyne.  Creating a disjointed, object-based installation that continued the pair’s ongoing King Arthur Rock Opera (KARO) project.  Responding to their atheletic surroundings, the pair incorporated a sword embedded in a cement basketball sculpture, as well as a full-scale horse sculpture, arranged alongside a number of other pieces that retold the love affair between Lady Guinevere and Sir Lancelot. 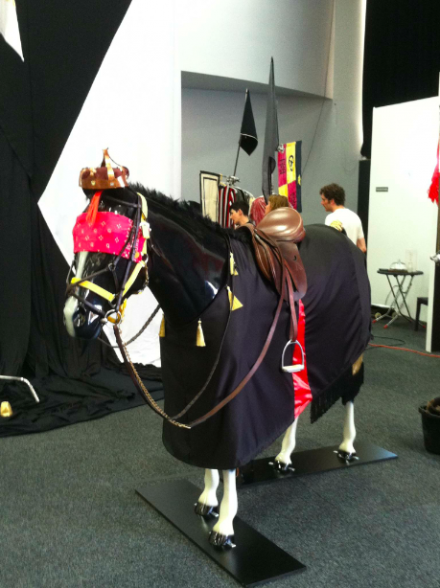 With the blockbuster emphasis on Frieze halfway across the East River, NADA seemed content to hone its focus, presenting a smaller selection of galleries that nevertheless packed a number of welcome surprises.  Parisa Kind was one such gallery, offering a tightly curated show that included impressive works by Lena Henke and Mike Bouchet, as well as one of Richard Jackson’s signature urinating dog sculptures, which stood inactive, daring the viewer to turn it on. Elaine Levy Project also brought several impressive works, including comically minimal paintings by Stephen Felton, and intricate wall hangings by artist Elena Damiani. 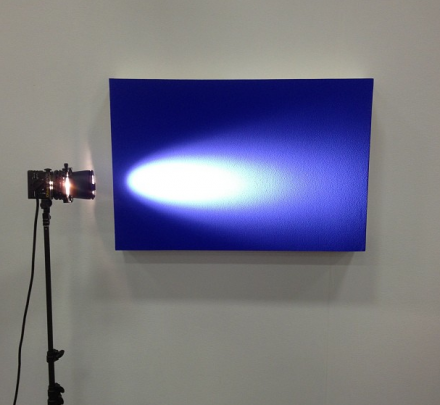 A miniature light installation, at NADA

New York Galleries were out in full force at this year’s event, showcasing the current strength of the city’s art scene.  On Stellar Rays presented a fascinating series of frenetic, visceral assemblages by Debo Eilers, slathering belts and household objects with green paint and photos to create dizzyingly layered, complex works.  Also of note was Interstate Projects, one of the few Bushwick-based galleries at the event, which showcased a series of grotesque fabric prints and sculptural works by Rachel de Joodes.  Evoking scatological and bodily responses, the works matched the intense affect of the subject matter with the materials themselves, each movement of fabric creating new folds and wrinkles in the already heavily textured piece. Marlborough Gallery was also present, exhibiting a selection of work by Andrew Kuo, Ara Dymond and others, underlining its place as a elder statesman of the small gallery circuit.  In a similar vein, Alden Projects offered an intriguing collection of New York gallery posters, including rarely seen posters for shows by Ellsworth Kelly, Daniel Buren, and a comical poster for a Warhol and Basquiat show, depicting the two as boxing competitors, stripped down above the waist and ready for combat. 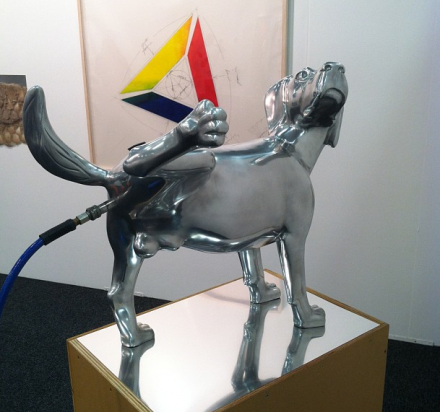 A work by Richard Jackson at Parisa Kind

A warm, fraternal air was present during the festival, with many gallerists wandering from booth to booth, conversing with fellow dealers and exchanging information.  A community spirit seemed to pervade the event, perhaps best exemplified by the minimal, poignant tribute to the recently deceased Daniel Reich.  Bathed in yellow paint, and adorned with a single portrait, a photograph, and a short one page memoriam offered to visitors, the booth offered a fitting tribute to the dynamic, vibrant personality of the late dealer and artist.   One could not help but find themselves thinking how rare this would be at a much larger festival. 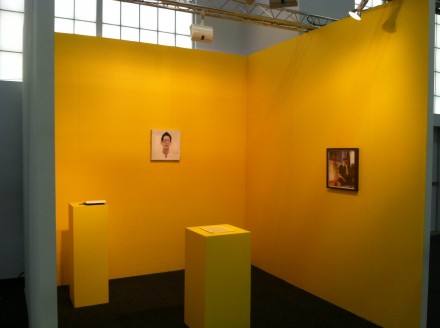 Welcoming a diverse and challenging group of artists and galleries, NADA has carved out a niche for itself alongside its big-budget competitors, encouraging collectors to take a chance on smaller market artists, and offering a speaking platform for many institutions that might be drowned out in the chatter around Frieze or Art Basel Miami Beach.  As this year’s edition of NADA New York proves yet again, a little heart goes a long way. 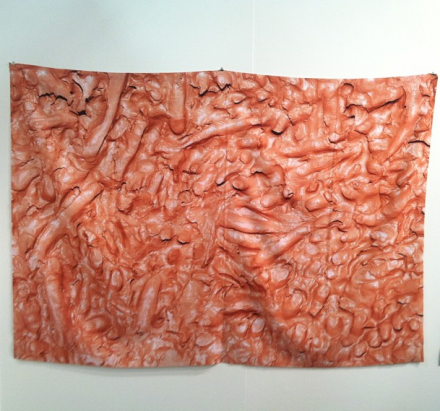 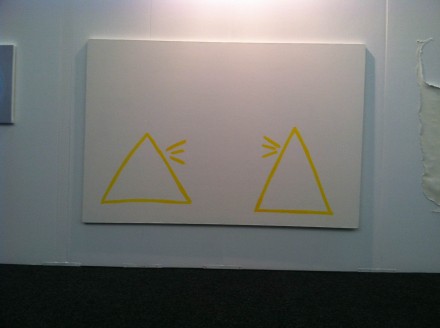 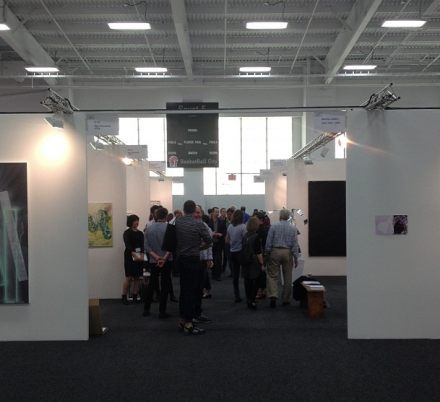 A scoreboard overlooks the proceedings at Basketball City 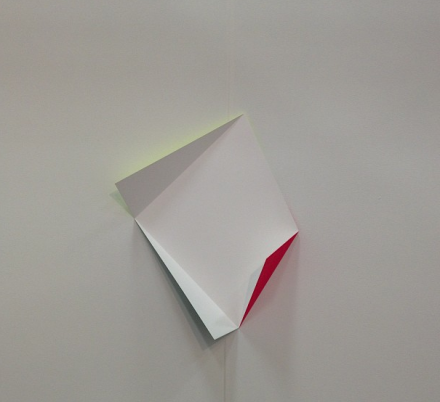 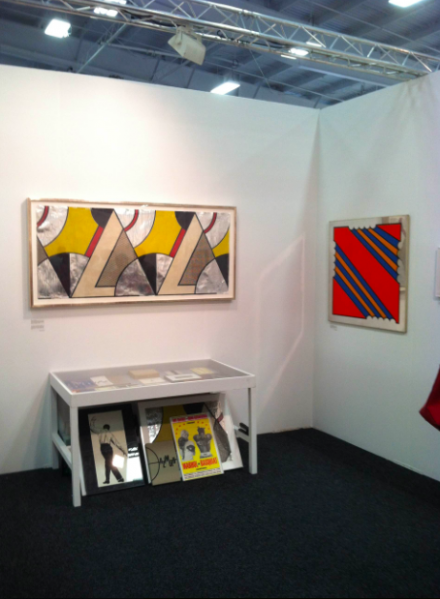 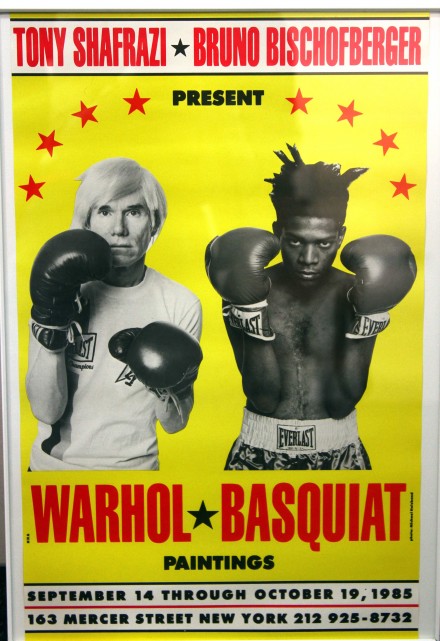 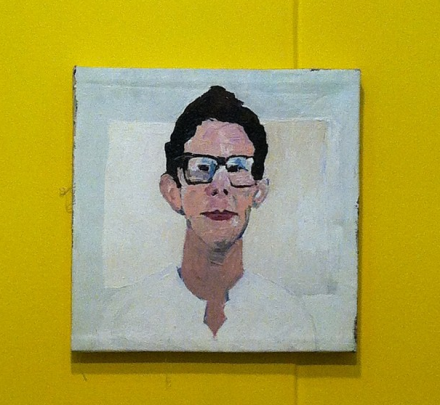 A portrait of Daniel Reich 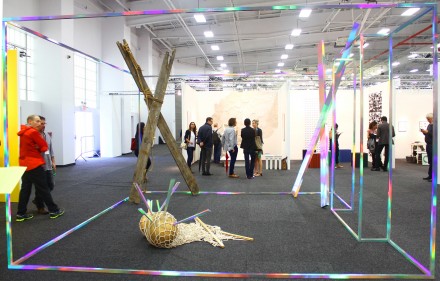 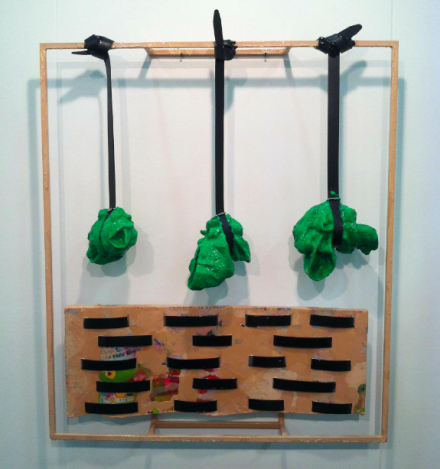 A Work by Debo Eilers at On Stellar Rays 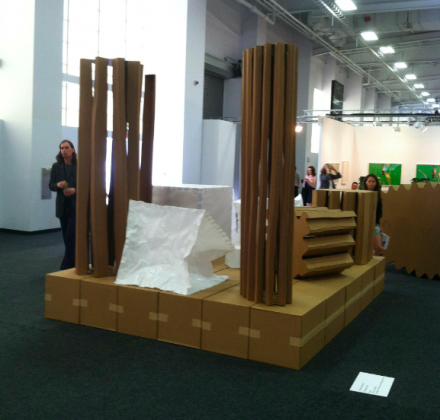 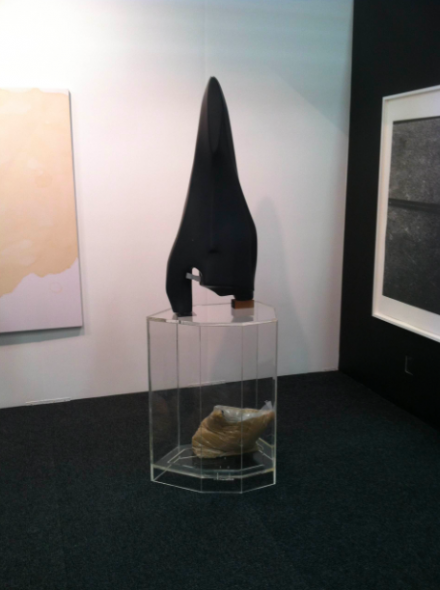 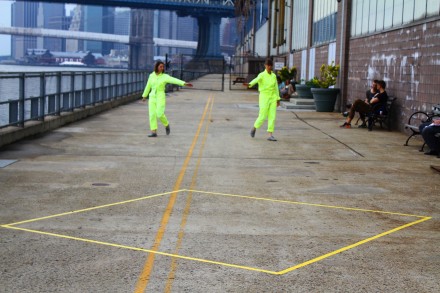 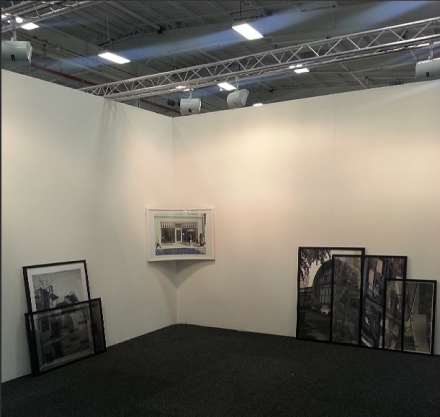 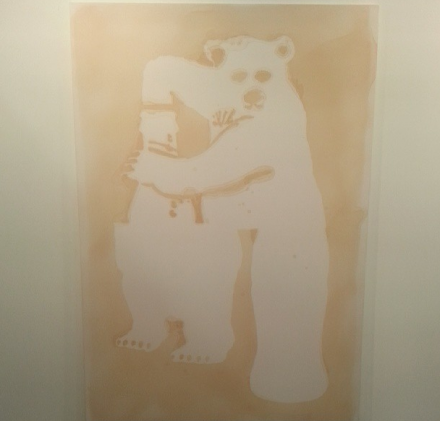 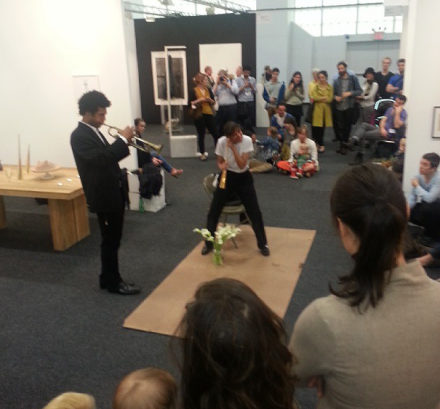 Performance by Megha Barnabas, with object by Hanna Sandin, Presented by SculptureCenter 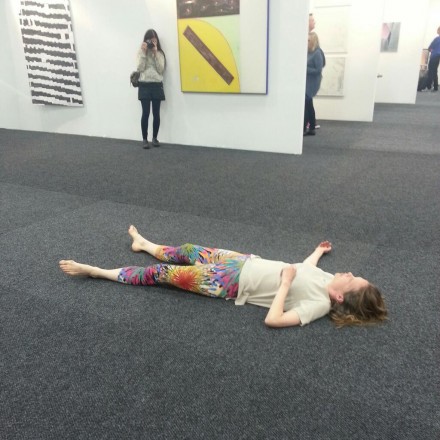 This entry was posted on Saturday, May 11th, 2013 at 11:30 pm and is filed under Art News. You can follow any responses to this entry through the RSS 2.0 feed. You can leave a response, or trackback from your own site.