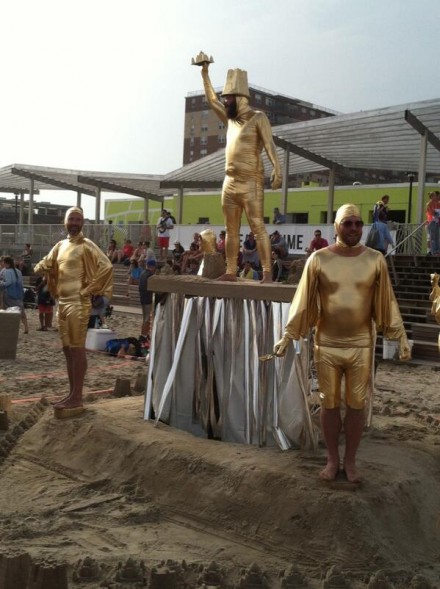 Ghost of a Dream’s Living Trophy Sculpture, via Daniel Creahan for Art Observed

This past friday, Creative Time returned to the beaches of Far Rockaway for its second annual “Creative Castles” sand castle building competition, welcoming a diverse group of artists to the redeveloping waterfront at Beach 86th Street for another year of bizarrely original sand sculptures, structures and imaginative installations. 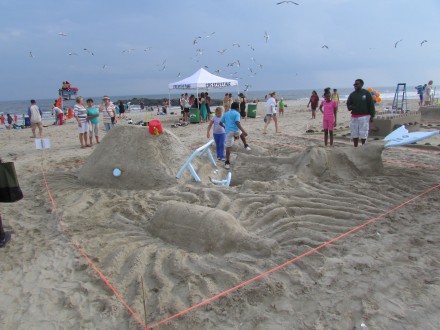 The contest was a strong return to form for the beaches of Rockaway, which still show evidence of the powerful waves of Hurricane Sandy last year.  Large sections of the boardwalk are still missing, but this did not discourage the crowds that flocked to the popular sand building contest, underlining the strong return to form the popular summer getaway has seen this year.  Judged by a collection of art world heavyweights and Creative Time affiliates, including Shelley Fox Aarons, Waris Ahluwalia, Klaus Biesenbach, the 2012 sand castle competition winners Jen Catron and Paul Outlaw, and Dana Farouki, the event drew an impressive crowd out to the beaches Friday afternoon, and the 10 artist teams on hand rose to the occasion, crafting a series of pieces that were at turns impressive, conceptual and ironically self-aware.  In one corner, artist David Brooks took his ambitions to a comic extreme, displaying a meticulous set of notes and architectural renderings of his planned recreation of the Tower of Babel.  As he worked to complete the tower, a pair of mimes continually disrupted his work, leaving only two steppes completed at the end of the day. 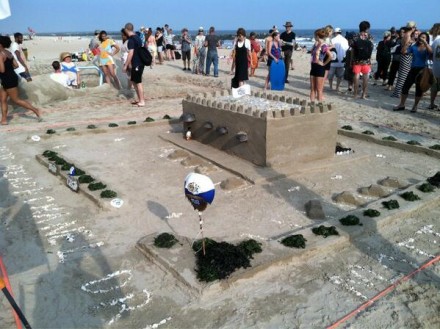 As a fitting counterpoint, the collaborative group Ghost of a Dream’s sculpture stood nearby, a towering platform of sand and reflective materials around which a series of gold-clad artists stood in triumphant pose, creating a living trophy.  Other artists brought a more subtle form of snarky commentary to the competition, namely Duke Riley, whose sandy, scale-model White Castle was a crowd favorite, and earned him a third place finish. 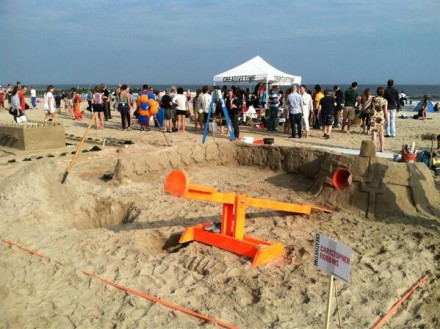 Other competitors brought a more traditional hand to the contest, creating impressive sculptures that combined meticulous craftsmanship with a sense of whimsy and originality.  Rachel Owens‘ enormous Sperm Whale Car, complete with shriner’s fez and plastic windshield, welcomed children wandering across the beach to sit in the cockpit, while Esperanza Mayobre’s impeccably rendered raft, covered in well-sculpted ropes and an impressive mast took home second prize for its impressive realism.  Nearby, artist Christopher Robbins created a “pancake machine,” complete with a catapult he used to fling pancakes into the crowds after trading sandy replicas for the real thing. 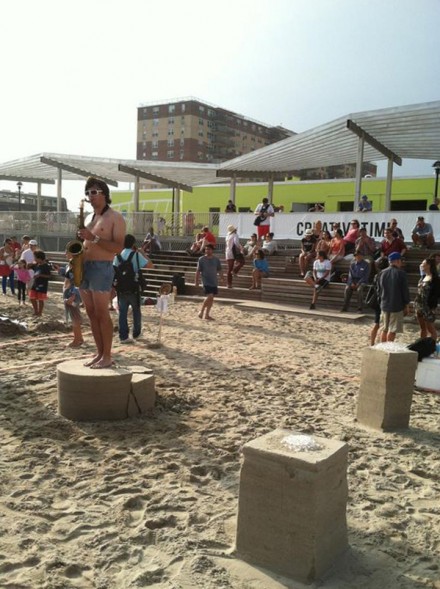 But it was Jamie Isenstein’s minimal, hard-packed columns of sand that ultimately took home the grand prize, a surreal installation that featured two pillars covered in bubbles, and a third featuring a cutoffs-clad saxophonist serenading the crowd with the signature riff from George Michael’s I’m Never Gonna Dance Again, a winking reference to the popular internet meme that won over the judges and brought her the top prize, a moderately large check for “500 Benjamins.” 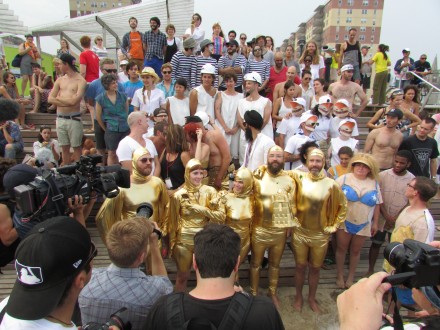 The Artists Shortly Before the Announcement of the Winners, Creative Time

Soon after the awards, the crowds departed for the nearby afterparty at Rippers (the joint food shack venture by Roberta’s Pizza and the The Meat Hook), where DJ Lucas Walters of Bushwick’s Tutu’s spun records as the sun set over the reconstructed boardwalk, a fitting end to an event that in part celebrated the slowly redeveloping Rockaway beaches. 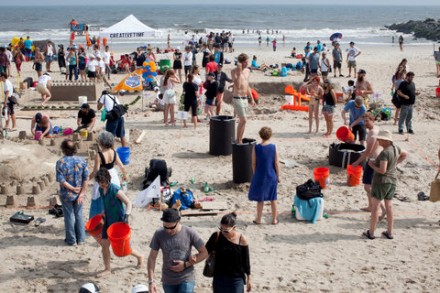 The Competition on Friday, via New York Times 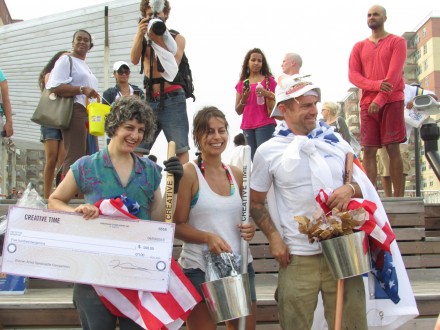 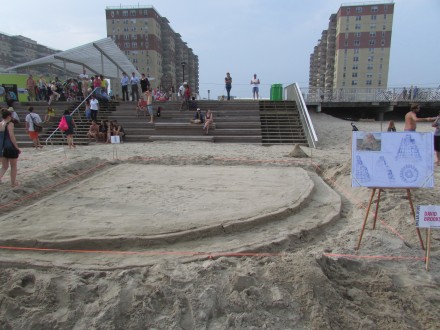 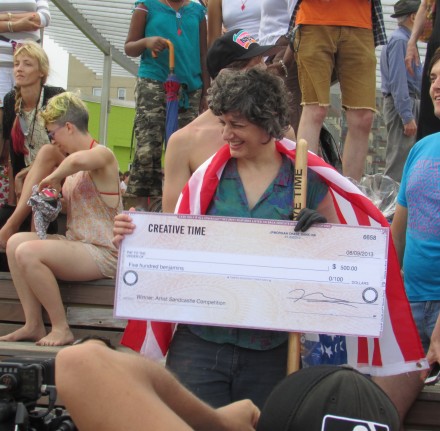 Jamie Isenstein with her Winning “Check,” via Daniel Creahan for Art Observed 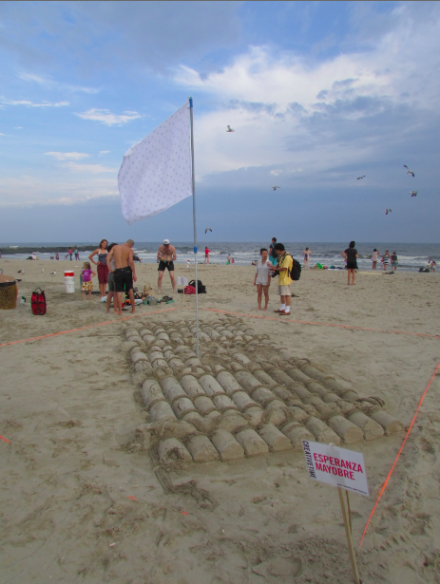 This entry was posted on Monday, August 12th, 2013 at 1:21 pm and is filed under Art News. You can follow any responses to this entry through the RSS 2.0 feed. You can leave a response, or trackback from your own site.