Currently, Pace London‘s 6 Burlington Gardens location is presenting the gallery’s first exhibition of works by American artist Robert Irwin. The new work springs from the artist’s pioneering practice during the West Coast’s monumental Light and Space movement.  Born in 1928, Irwin has been exploring the concepts of perception and space for over sixty years. Beginning as a painter, he was a foundational member of the Light and Space movement in the 1960s, helping to develop a concept of art as a response to specific life experiences in equal measure with the work’s surrounding environmental conditions.

Since 1975, Irwin has created 55 “site-conditional” projects at significant institutions, most recently including the Central Gardens at the Getty Center in L.A. and the Dia: Beacon Center for the Arts.  His current London installation is composed of two site-specific installations, occupying the ground floor and first floor of the gallery. The first, Who’s Afraid of Red, Yellow & Blue³ III, includes three hanging aluminum panels arranged to reflect identical panels installed just above the floor. An exploration of space, perceptual psychology, and philosophical ideas about the human experience of time, the installation is a continuation of Irwin’s previous installation Who’s Afraid of Red, Yellow and Blue³ which was presented in a major retrospective in 2007-2008 at the Museum of Contemporary Art, San Diego.  Intended to remind the viewer of the abstract paintings of Josef Albers and Barnett Newman, Irwin has made an attempt with this work to depict an arguably four-dimensional interpretation of these previously painted canvases.  In this way, the viewers are meant to experience the three dimensional installation through time, as they make their way around the room-sized structure. 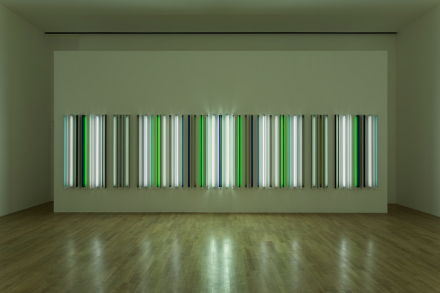 The other work, entitled Picadilly, after London’s illuminated Picadilly Circus, is installed on the floor directly above. The work is composed of 47 vertically mounted fluorescent tubes colored green and white, and remaining constant in color and light, unlike some of his previous works. Here, Irwin continues his exploration of thematic content including the rhythms, textures, densities, temperatures, and chromatic relationships that all affect our perception of objects in space and time. The work is a direct response to his perception of the conditions present at the famous London road juncture of the same name.

The exhibition at Pace London, which opened on June 20th, will continue through August 17, 2013. 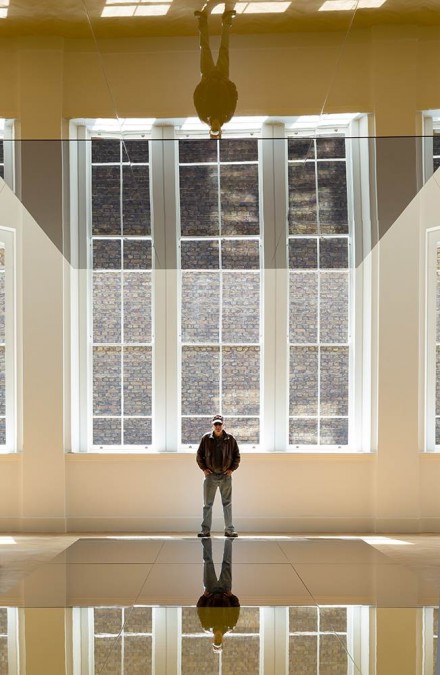 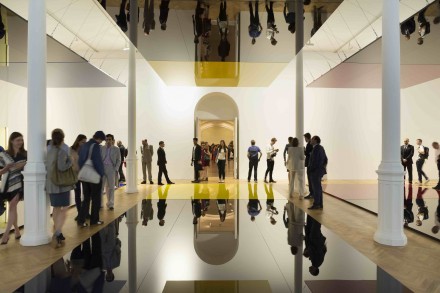 This entry was posted on Monday, August 5th, 2013 at 1:15 am and is filed under Art News. You can follow any responses to this entry through the RSS 2.0 feed. You can leave a response, or trackback from your own site.