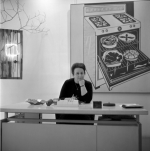 The Museum of Modern Art has announced a new show, opening this December, focusing on the life and patronage of collector Ileana Sonnabend, a Romanian emigré who at one time was married to Leo Castelli, and presided over the New York art world, eventually developing a collection valued at well over $900 million, and championing artists like Robert Rauschenberg and Mario Merz.  “For us, the emphasis will clearly be on the history she made.” Says Chief Curator Ann Temkin.

This entry was posted on Sunday, August 11th, 2013 at 4:35 pm and is filed under Art News. You can follow any responses to this entry through the RSS 2.0 feed. You can leave a response, or trackback from your own site.