New York – “The String and the Mirror” at Lisa Cooley Gallery Through August 28th, 2013 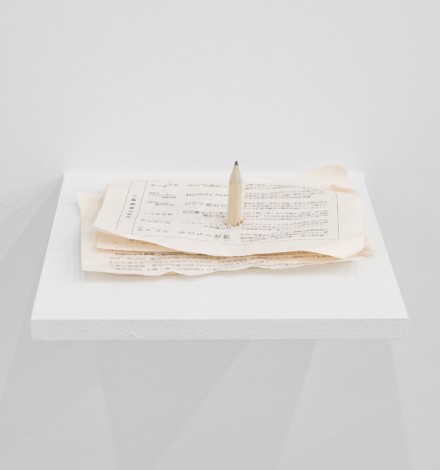 The field of sound art, as trumpeted by the New York Times and the Museum of Modern Art, is currently emerging into the mainstream dialogues of the high art world, exposing what was once seen as a relatively underground practice to the milling crowds of major museums.  Even so, with that sort of focus placed on the medium, a new level of critique, or rather, a reassessment of the techniques, practices and processes inherent in the creation of sound art. 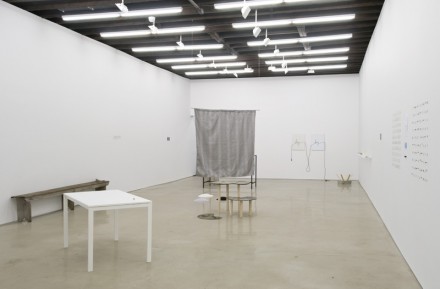 Just opened last week at Lisa Cooley Gallery in the Lower East Side, the group show The String and the Mirror delves deep into the raw materials and parameters of sound as an artistic practice, shifting the focus from sound itself to the physical and theoretical grounds that generate it. 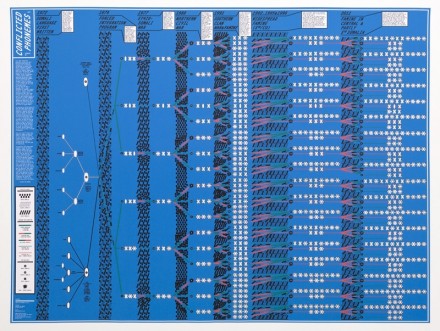 Immediately noticeable upon entering the gallery is the silence.  In fact, the space feels somewhat regulated in its insistence on silence through the installation of several decibel meters around the exhibition by artist Alan Licht.  Actively monitoring the space for sound, Licht’s piece makes the viewer inherently aware of their intrusion on the space, and the sound that they themselves generate with any comment or step. 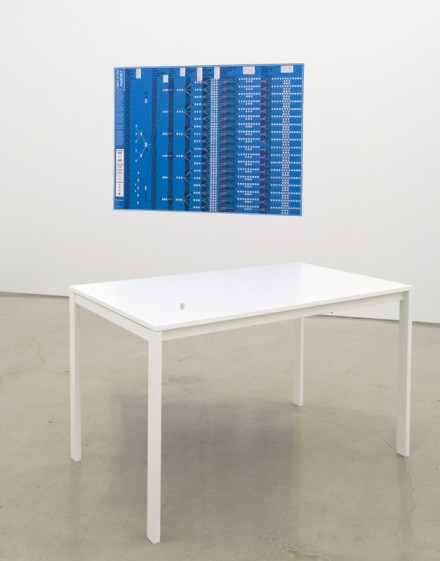 Throughout the show the various pieces feel balanced, albeit precariously, on the moment of actually sounding.  On one side of the gallery, Matthieu Saladin‘s sculptural work of a table, with a single coin balanced on its edge, leaves a sense of anxious anticipation for the sonic cue to its fall.  In another corner, Dave Dyment‘s Nothing (for Robert Barry) explores the act of hearing.  Jamming six separate sonic pest controllers into a single surge protector, Dyment’s work is in fact constantly generating sound, pitched outside the human auditory spectrum.  Making explicit the limited nature of human perception, the work stands somewhere between sound and silence, underlining the blurry edges of the sound art practice. 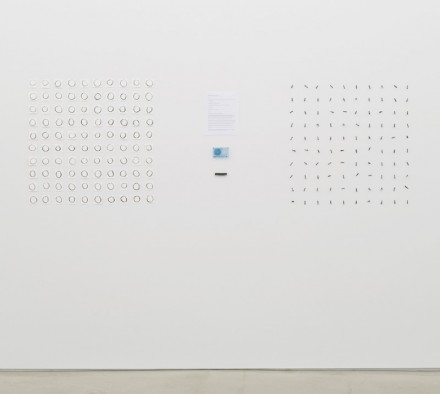 Other works focus on sound as the cause or effect (and occasionally both in turn) of a generative process, either one of translation, interaction, conflict or activation.  Seth Cluett‘s work  100 Circles for the Mind consists of 100 pieces of paper with black circles, placed alongside corresponding loops of magnetic tape with the recorded sounds of each circle’s creation.  Lacking the unifying sonic link, the work establishes an explicit, although somewhat abstract link between the creation of sound and the artifacts it leaves behind. 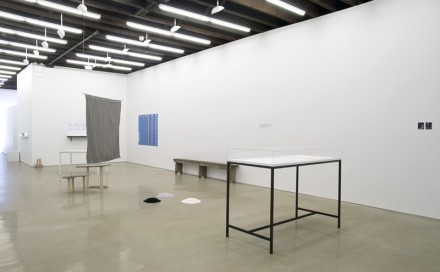 But perhaps the best example of this causality is exhibited in the back room of the gallery, a fully realized office space by duo Essex Olivares.  Filled with sonically potent materials (water coolers, paper clips, office chairs), the work includes a series of instructions, diagrams and signage encouraging visitors (or perhaps “users” is a better term here), to engage with the space, veiled in the guise of a “free-thinking” exercise.  Equal parts unnerving, absurdly satirical and and potently evocative, the sonic environment is turned inwards, using the office as a meditation on its own sonic space, while commenting on the banality of its own trappings.

In an interesting counterpoint to MoMA’s “exhaustive” examination of the field of sound art, The String and the Mirror offers an intriguing return to the object and the agent in the creative process of sound art, all while avoiding overly simplistic emphasis on the artist as a pure “creator.”  Instead, a vision of the artist bound up in an auditory and physical dialogue with their materials rises to the fore. 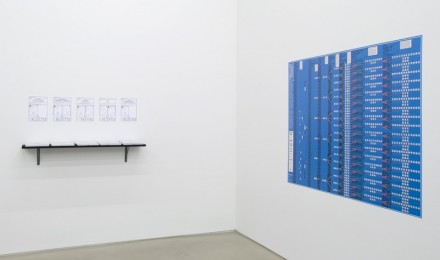 The String and the Mirror closes on August 28th.  A number of performances by artists Hong-Kai Wong and Essex Olivares will be held at various dates during its run.

This entry was posted on Monday, August 12th, 2013 at 12:00 am and is filed under Art News. You can follow any responses to this entry through the RSS 2.0 feed. You can leave a response, or trackback from your own site.