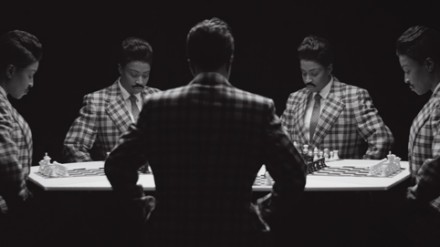 Lorna Simpson (b.1960, Brooklyn, New York) is an African-American artist, working across multiple media, often focusing on photography.  After completing studies at University of California-San Diego and the School of Visual Arts, New York, Simpson achieved recognition in the mid-1980s.  In an era of avid multiculturalism, her work explored themes of racial stereotyping, ethnicity and gender, placing her at the forefront of females and ethnic minorities gaining recognition in the art world.  She was also the first female of color to participate in the Venice Art Biennale (1990).

Jeu de Paume, the French national gallery of contemporary photo and media art is the venue for Simpson’s first major European retrospective, curated by American Paris-based freelance curator Joan Simon. The exhibition explores Simpson’s artistry, focusing on her photographic oeuvre and video work from the 80’s until present and is also accompanied by a catalog. 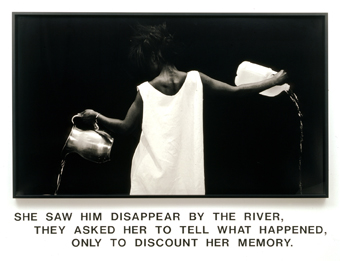 Simpson started her career as a documentary photographer in New York, where she continues to live and work, with her husband, artist James Casebere. The couple work within the realms of social commentary, but moving this term into a broader sense; her husband explores different historical and political issues, touching upon themes like the American Dream, religion and globalization, through photography. They both emerged from New York’s dynamic conceptual photography scene of the 1980’s, along with artists such as Cindy Sherman, Laurie Simmons, Richard Prince, Michael Zwack and Barbara Kruger, to name a few. Simpson has, since the 80’s, evolved to become more of a studio photographer, orchestrating and constructing situations as the base of her photographs, which take on a heavily stylized and sleek visual language.  Often, the viewer is made a voyeur; subjects are cropped, photographed from behind or gazing outside of the frame. 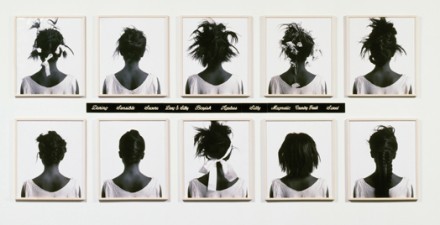 Through this work, Simpson attempts to invite the visitor to see beyond skin color. Her Stereo Styles(1988) series, ten mug-shot like photos of the back of black women’s heads, insert rows of adjectives between photos, such as “Sensible,” “Daring,” “Severe,” and “Silky.” The adjectives are used to contrast the images, humanizing the subjects as well as the viewer.  The women in the photos all have different hair-styles; Bouffant Pride(2003) and Skinnatural (2007), in which Gallagher highlights racial stereotypes, while placing the images within the visual landscape of surrealism.  Simpson does not only use words, but also poetic phrases in her work: “She saw him disappear by the river, they asked her to tell what happened, only to discount her memory” accompanies a photo of a woman bearing a pitcher in the moving piece Water bearer(1986). 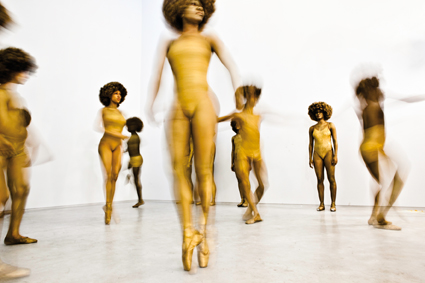 Twenty Questions (A sampler) (1986), another series of four identical photographs of the back of a women’s head, are accompanied by five questions to assist the viewer in their reading of the work. “’Is she pretty as a picture,’ or ‘clear as a crystal,’” “or pure as a Lily,” “or black as coal,” “or sharp as a razor,” questions all pertaining to simplified personality traits, leading into issues of female objectification and social roles. A three-screen, slightly dystopic video installation Playing Chess (2013), shows the artist pitted in a game of chess against herself, dressed as a male, and accompanied by a pianist. As the loop continues the players are multiplied, creating frame upon frame of frantic disarray.  The piece was made especially for the exhibition, and compared to the two previous pieces, reflects the progress of the feminist movement (both sexes are “players”) while illuminating that there is much work to be done. If societal constructions of male and female were erased, the player would have one less inner demon to battle with.

The exhibition also includes more whimsical work, such as Gold Headed (2013), a series of powder and ink drawings; airy portraits filled with color, and “Photo Booths,” a collection of found photos, often historical, and drawings (Gather, Please remind me of who I am…). Unlike the previous photos mentioned, these pieces are a different visual experience altogether, lighter and more open ended while never abandoning deeper intellectual meanings. 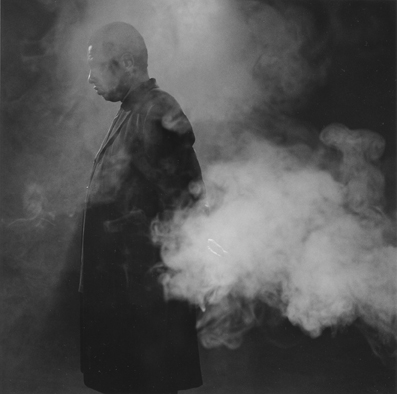 Driving at a complex and multilayered view of feminist works, Lorna Simpson’s current show at Jeu de Paume is a powerful exhibition that welcomes an intricate look at the current struggles for feminist perspectives and civil rights in America. 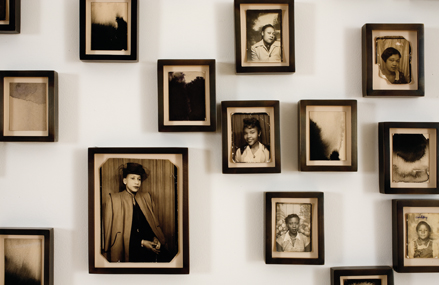 This entry was posted on Tuesday, August 27th, 2013 at 1:58 pm and is filed under Art News. You can follow any responses to this entry through the RSS 2.0 feed. You can leave a response, or trackback from your own site.