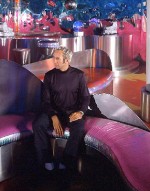 Fashion designer Jeremy Scott has unveiled a new series of prints for his Spring and Summer 2014 line, featuring collaborative artworks made with Kenny Scharf.  Featuring Scharf’s signature cartoon imagery, the pieces are part of a series called “Teenagers from Mars.” “Jeremy is the first person that I ever let take my art and do whatever he wants. I wasn’t nervous about it not being the greatest most fun thing and I wasn’t let down for one second.”  Says Scharf.

This entry was posted on Monday, September 9th, 2013 at 6:29 pm and is filed under Art News. You can follow any responses to this entry through the RSS 2.0 feed. You can leave a response, or trackback from your own site.