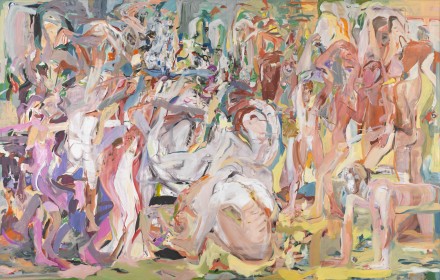 A collection of new and recent paintings by London-born artist Cecily Brown, is currently on view at Gagosian Gallery, Beverly Hills through October 12. The show includes fifteen paintings primarily focusing on the the human form as an abstraction, and follows up on a previous body of work shown in at Gagosian’s New York gallery earlier this year. 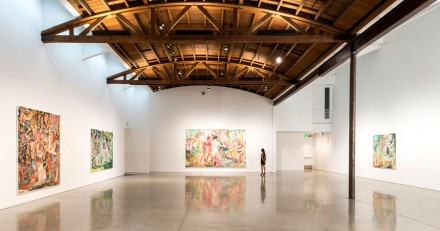 Moving away from classical figure painting reminiscent of such painters as Edouard Manet and Edgar Degas, Brown’s work liberates tradition, fracturing her nude subjects and creating fluid movements in a stationary medium. Unlike her predecessors, Brown’s human portrayals are an anonymous meeting of flesh, with brief moments of detailed nuance.

The tonality of the canvases vary between the three rooms; fleshy hues give way to more wild shades of pink and orange, but sexual excitement and raw energy resonate throughout the space.Indeed, the unidentified figures seem to blend not only with one another, but their landscape as well. In Luck Just Kissed You Hello, a fully-realized figure on the left slowly gives way to a cacophony of shapes. The stance of the first breaks out into frenzied movement, shedding staunch pose for fluid turbulence. Each painting has a certain, collage-like element to it, swimming back and forth between moments of harried action and smooth, human lines.  The result is a series of works where the human form and surrounding images are blurred together through Brown’s turbulent style. 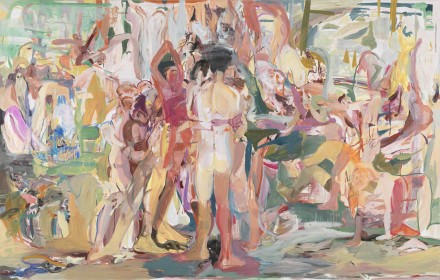 In other works, Brown’s composition is more academic, with the painting composed in tableau, while incorporating traces of formal and gestural concerns. In talking with Brown, she reveals that she is primarily interested in tension and movement, contradiction and conflict: “It’s very hard to paint the figure and argue conceptually or intellectually that that it the correct thing to do. One is always having to argue for the fact that one wants to paint.” This clash is apparent in the work; the figures appear to argue amongst themselves, their physical dispute dissolving into one another, all while Brown pursues her desire to capture their actions on canvas.

Cecily Brown will remain on view at Gagoisan Gallery, Beverly Hills through October 12. 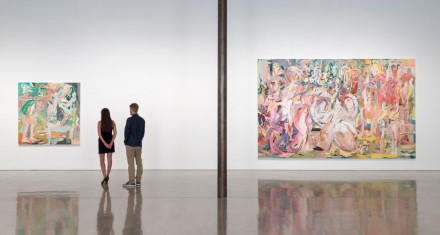 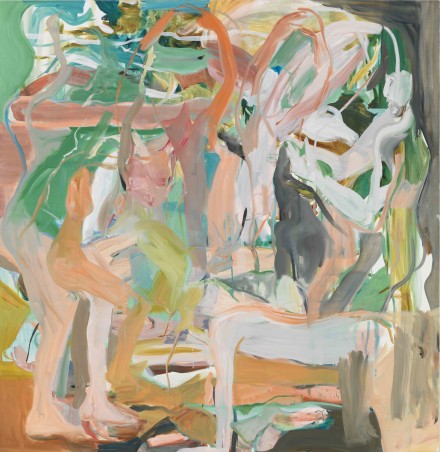 This entry was posted on Wednesday, September 25th, 2013 at 12:00 am and is filed under Art News. You can follow any responses to this entry through the RSS 2.0 feed. You can leave a response, or trackback from your own site.