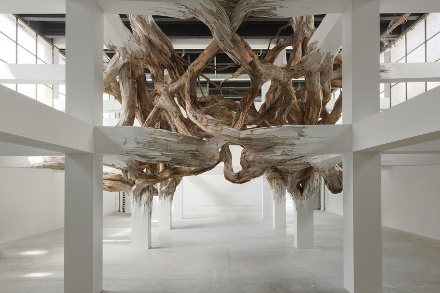 In a myth which circulated amongst the Bororo people of central Brazil, an early chief named Baitogogo flees into the forest after avenging the rape of his wife. While running through the wood, he is attacked by his son, who flies above him as a bird and bombards his father with droppings which germinate into a tree. At first shamed and burdened by the tree, as he wanders the forest, Baitogogo eventually becomes enchanted by his surroundings, and lives from then on in his newly found paradise.  While refusing a direct correlation between the myth and his latest work, contemporary Brazilian artist Henrique Oliveira has created his own “Baitogogo” in the form of a knotted, anthropomorphic forest, currently on view at Paris’s Palais de Tokyo. Interested in the same dream logic, binary oppositions, and unexpected life explored in the myth of Baitogogo, Oliveira’s work is hybrid and transformative, fantastic and unexpected. 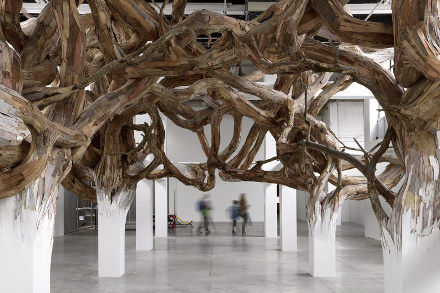 Born in 1873 in Ourinhos, Brazil, Oliveira attended the University of São Paulo, where he received a BFA in painting in 2004 and a Masters in Visual Poetics in 2007. It was there, while still a student, that Oliveira first got his idea for the large wooden installations for which he is perhaps best known. Conducting studies in painting and the nature of surfaces, Oliveira’s studio window looked out onto a wooden construction fence, which he watched deteriorate over the course of two years. Using the same fluidity of thought and association displayed in his art, Oliveira drew the connection between the separation of the wood into different layers and colors and his own process of painting. The week before his final student show opened, the construction across from his studio was completed, and the plywood fence was torn down. Oliveira reclaimed the wood, and displayed it in his first installation. 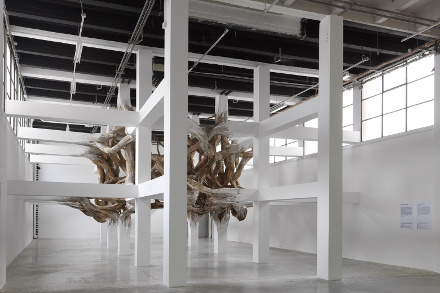 Indeed, Oliveira describes his sculptures as three-dimensional paintings, and takes for reference the movements of thick oil and pastel in his arrangement of wood. Wrapping the recycled plywood around PVC, Oliveira bestows an unmanageable, dry material with motion and fluidity, and there is found in his art an underlying sense of connection and destabilization, and nature rediscovered in exile.  Hearkening back to his original inspiration, Oliveira uses “tapumes” as a title for many of his works – a word which means “fencing,” “boarding,” or “enclosure,” in Portuguese.  His work is reminiscent of the dynamic urban decay and reconstruction to be found throughout São Paulo, and its sprawling favelas. 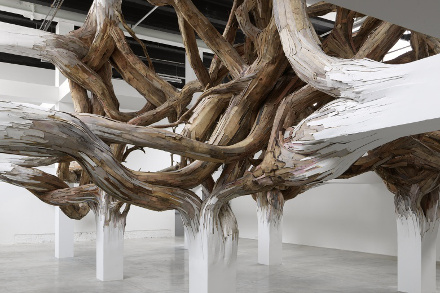 In his fusion of elements of the urban and the vegetative, the artificial and the organic, art and science, Oliveira’s “Baitogogo” at once devours the Palais de Tokyo and brings to it new life. Perhaps in a nod to the original Baitogogo, Oliveira draws a formal analogy in this work to the human body, taking inspiration from medical textbooks and studies of tumors and physical pathologies. Playing with the idea of uncontrollable organic forces and calling to mind the wild and humid Amazon, his work is both enabled and dictated by its space and materials; directly responsive and intimately connected to the situation in which it was created.Oliveira lives and works in São Paulo, and has participated in numerous solo and group exhibitions in Brazil and internationally.

The exhibition will be on display until 9th September

This entry was posted on Monday, September 9th, 2013 at 12:00 am and is filed under Art News. You can follow any responses to this entry through the RSS 2.0 feed. You can leave a response, or trackback from your own site.