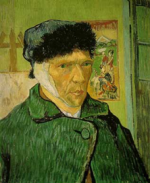 During research on a book about Van Gogh’s Sunflowers, writer Martin Bailey stumbled across a Parisian newspaper article, detailing the artist’s public severing of his left ear following a row with Gaugin.  The article, which reported the artist merely as “someone named Vincent,” also details Van Gogh’s later arrival at a “house of ill repute,” where he presented the doorman with the piece of his ear.  “Take it, it will be useful.”  The artist told him.Read more at The Art Newspaper

This entry was posted on Saturday, September 7th, 2013 at 1:55 pm and is filed under Art News. You can follow any responses to this entry through the RSS 2.0 feed. You can leave a response, or trackback from your own site.