New York – Balthus: “Cats and Girls – Paintings and Provocations” At the Metropolitan Musuem of Art Through January 12th, 2013

Balthus, Thérése (1938), Courtesy of the Metropolitan Museum of Art

Balthus, Thérèse Dreaming (1938), Courtesy of the Metropolitan Museum of Art

Born Balthasar Klossowski de Rola, Balthus (1908-2011) cultivated an air of mystery around his own origins and personality, deliberately incurring an enigmatic reputation as a “painter of whom nothing is known.” Working in the classical tradition in the face of modernism’s increasing taste for abstraction, Balthus’ self-taught realism was indebted to Piero della Francesco, Poussin and Courbet, yet undoubtedly influenced by the circles of the Parisian avant-garde in which he grew up.  Despite his efforts in personal obfuscation, the exhibit includes a considerable amount of biographic commentary on events in his life, dividing the paintings into chronological clusters based on his moves between studios, cities and countries, in times of peace, war, and love. Indeed, the curatorial program attributes changes in style, palette and subject to facts of geography and personal proximities, side stepping the pitfalls of his legendary self-fictionalization and manipulative obscuring of history. 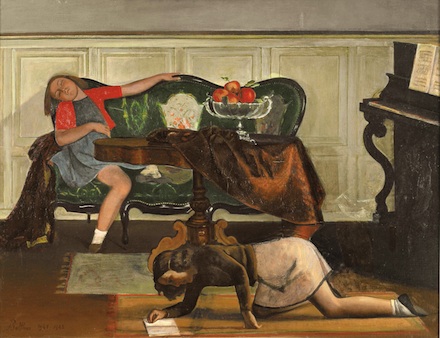 Balthus, The Salon I (1941-43), Courtesy of the Metropolitan Museum of Art

The Balthus myth, self-fabricated and often transparently so, insistently disarms critical interpretation of his works, seeking to foil characterizations of erotic, even pedophiliac, content. Pushing beyond the borders of the merely suggestive, Balthus first inflamed critics with his 1934 painting, The Guitar Lesson, wherein a female teacher ‘plays’ a young girl’s disrobed body like an instrument, tugging her hair and plucking absent strings shockingly close to her groin. The ensuing controversy caused a depressed (and suicidal) Balthus to take a hiatus from painting—an issue the curatorial text skirts around discussing—later timidly returning to portraiture. Yet even in less explicit future works, Balthus would continue to paint pubescent girls, indeed it is for these that he is best known, with questionably prurient interest. The specter of Lolita haunts repeated studies of his young neighbors, who posed for Balthus as emblems of adolescent awakening, their nubile bodies casually splayed over furniture in silent reverie or determinedly hunched over books on the floor.  In works like The Salon I (1941-43) he captures the torpid languor of confined youth; children encaged in the small living room, idly reading, arched into the sleep of boredom, a resigned restlessness evoked through muted tones and a chalky palette.  The voyeurism implicit in these scenes is dramatized by the recurring motif of a sleeping girl, Balthus probing her psychological interiority in the vulnerable state of rest. These become almost approximations of reclining nudes, the accidental slip of a blouse revealing breasts of an unaware subject, inviting a suggestive interpretation of her somnolent posing. 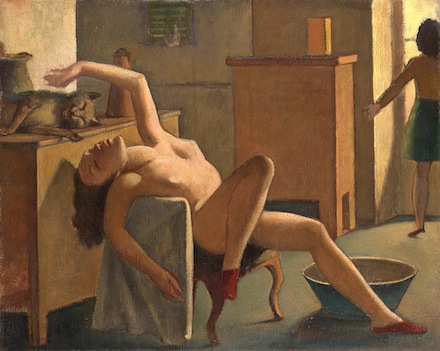 Balthus, Nude with Cat (1949), Courtesy of the Metropolitan Museum of Art

The first gallery is filled with Balthus’ early model, Thérèse Blanchard – several portraits made from 1936-39 that document a life in transition. Thérése’s at times diffident and elsewhere insouciant stare, her reserved and yet confident demeanor, is communicated in images of presumed solitude, uninhibited postures revealing titillating hemlines and shamelessly exposed underwear. The cat lapping up milk at Therese’s side supplies her own casual sensuality with the provocative stamp of iconography – the cat traditionally symbolic of feminine sexuality. These somewhat indelicate character studies appear as tame precursors to later images like Nude with Cat (1949) or The Room (1953), wherein the pussy cat’s presence (and indeed participation) heightens the erotic effect. Divested of the wholesome costume of cardigans, skirts and ankle socks, these girls are fully stripped and lounging with rather explicit postures, exposed to the smiling eyes of the cats. 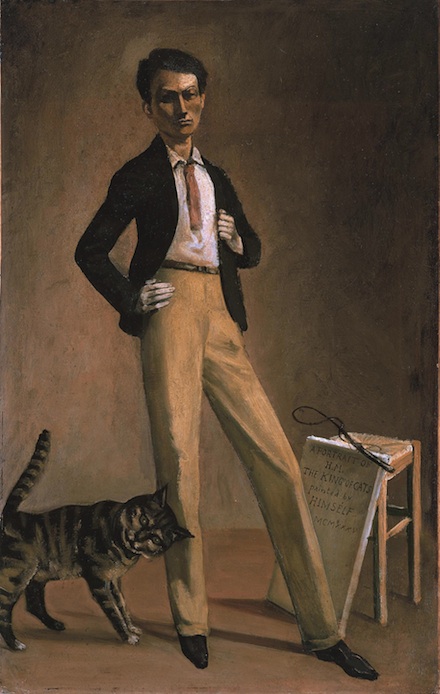 Balthus, The King of Cats (1935), Courtesy of the Metropolitan Museum of Art

The exhibit’s pendant theme, represented in nine of the paintings of children, moreover characterizes the cat as a subliminal stand-in for Balthus himself.  The first painting on view is a self-portrait entitled, The King of Cats (1935), introducing a young Balthus staring defiantly outward, with a robust tabby rubbing against his legs, asserting a sort of anthropomorphic presence with hauntingly human eyes. The taunting cheshire grin of Balthus’s felines lends an ominous sexual undertone and surreal sense of animation to his muted realism. Appearing as childhood pets lurking in the bourgeois salons of childhood boredom, silent witnesses to the troubling transition to adolescence, the cat has been read as a surrogate for the artist—tacitly inserted into the private realm of puberty, a creature as aloof as his introspective subjects. His feline affiliation is made literal in Le Chat de la Méditerranée (1949), a dream-like canvas featuring a cat-headed man preparing to dine on a fish flying from an arcing rainbow, replete with surrealist accouterments, a quizzical lobster and a waving semi-nude woman.

This show traces the recurring presence of the cat back to a childhood trauma, incredibly documented by the 11-year-old Balthus, in a series of pen and ink drawings. Arguably the show’s most stunning inclusion, and perhaps Balthus’ greatest work, the 40-page collection illustrates an autobiographic narrative of the discovery and loss of a stray cat—Mitsou, a downy black and white kitten who becomes his cherished companion and partner in crime. These precious small-scale images relay a precocious expressionism and artistic prodigy recognized by the poet Rainer Maria Rilke, the then lover of Balthus’ mother Baladine, who published the drawings and added a preface. The final image, of Balthus crying at the loss of his friend, expresses the cathartic power of this art project, and moreover foreshadows his future fascination with cats. This sentimental ode to lost love, an almost bildungsroman of a child learning to deal with an infantile tragedy, portends Balthus’ fixation with the passage from youth to adulthood. 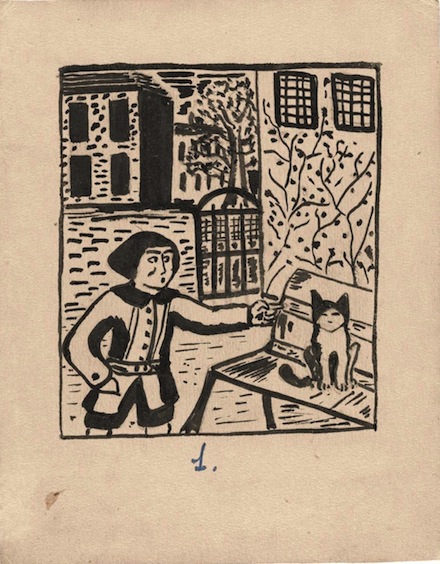 Balthus, Mitsou (1919), Courtesy of the Metropolitan Museum of Art

The final gallery concludes with images of Balthus’ favorite model in the 1950s, Frédérique Tison, at the Château de Chassy in the Morvan, contributing to the canon of somber youth and domestic mailiase. These later paintings are built up in a clotting impasto, more formal than psychological in content. The monumental Nude Before a Mirror (1955) presents a columnar nude in an almost Egyptian profile stance, the composition geometrically divided into patterned sections of flat color. This blocky upright female, less volumetric than the modeled prewar bodies, is far from the work The Victim (1946) in the previous room, which epitomizes the puppet-like comportment of dead limbs and voyeuristic display of the female form. 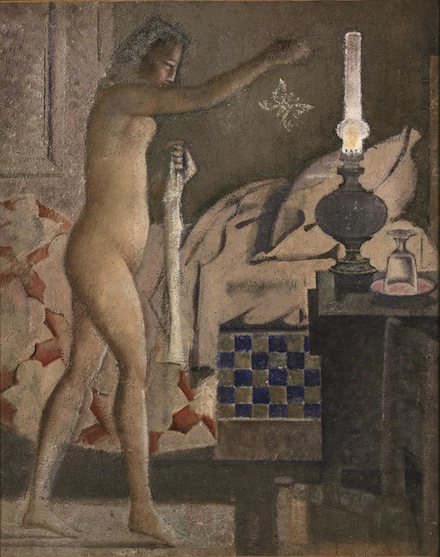 Balthus, The Moth (1960), Courtesy of the Metropolitan Museum of Art

The oblique erotic content underlying many of the works in this exhibition has been attributed to a perverse imagination as much as an accurate telling of puberty and childhood sexuality. The omnipresent icon of sexuality, the cat, heightens the disturbing implications of his paintings. If we are to presume that these animals represent Balthus, accusations of a violation of childhood, of privacy, and of the social mores that prohibit a man’s proximity to budding womanhood take on new power. In defending his work from such interpretations, Balthus located the audience’s discomfort with the facts of children’s sexuality in their own desires, not his own. In his memoirs, Vanished Splendors, Balthus described his focus as the “transformation from angelic state to young girl, capturing the moment of passage… the mystery of childhood”. Given his historically retroactive revisionism, not to mention the fallacy of the artist’s intent, we must take this as but one perspective, one further provocation.  While declaratively thematic in content, the exhibit begins stronger than it concludes, with the final galleries adhering less comprehensively to cats and girls than the more focused collections of images of Thérèse and Mitsou. Concurrent with the Metropolitan’s exhibit is a small show of Balthus’ late polaroid photographs at Gagosian, offering a chance to see works from the other end of his career.

This entry was posted on Thursday, October 31st, 2013 at 9:26 am and is filed under Art News. You can follow any responses to this entry through the RSS 2.0 feed. You can leave a response, or trackback from your own site.