New York – Walter Dahn: “4th Time Around (My Back Pages)” at Venus Over Manhattan Through October 26th 2013 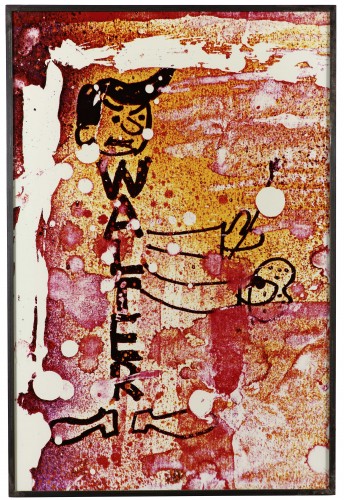 Walter Dahn’s 4th Time Around (My Back Pages), an exhibition curated by Richard Prince, is a presentation of paintings, “anti-silkscreens,” and rare bronze sculptures by artist Walter Dahn, presenting a taste of his artistic practice since 1981. The title of the exhibition is derived two Bob Dylan songs, both favorites of the two artists (who have been friends since the late 80’s early 90’s). 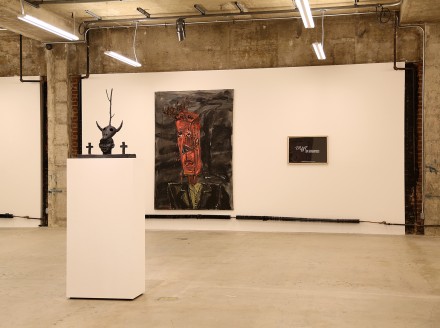 Prince and Dahn allegedly met at Barbara Gladstone gallery in New York City, and a shared interest in “outsider art,” New Wave and Punk, as well as similar interests in the exploration of the under-belly of American culture built the foundations for their on-going friendship. Prince has long been a collector of Dahn’s work. 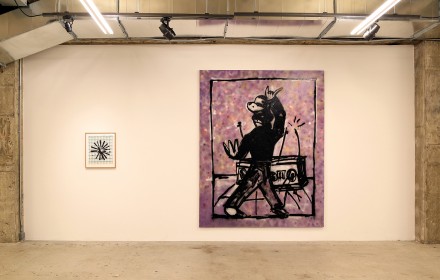 Dahn’s early artistry was highly influenced by German abstract expressionists such as Blinky Palermo, Imi Knoebel, Sigmar Polke and Jorg Immendorf. Traces of this influence are visually present in the exhibition through his use of bold colors and condensed text and symbols, as well as simplified images. His concepts, however, are more easily traced to his one-time professor Joseph Beuys, explorations in the extension of art outside of formal art practice. 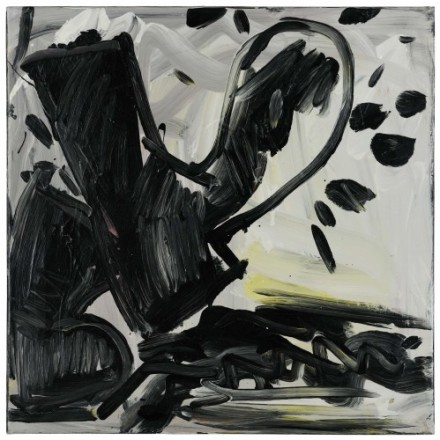 Dahn’s interest in “outsider art” is also apparent in several of the pieces on view, particularly the large-scale, caricature-style renderings of human forms, in which faces look to be on the brink of insanity. Dahn gained international acclaim in the 80’s as one of the leading painters in the artist collective “Mulheimer Freiheit,” working in the style of the Junge Wilde or Neue Wilde (German for “wild youth” or “new wild ones”). Dahn’s work has also been connected to his interest in music throughout his career as an artist. In 1994, he painted the names of his favorite songs on canvases and in 1997 he made work that referenced the band Palace. 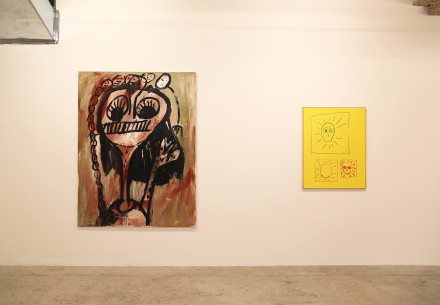 Dahn has used his own drawings, photographs and images as well as those of others, often juxtaposing them in his silk-screen practice. Despite Dahn’s clear ties to Germany and the evolution of German modern and contemporary art, the artist has often chosen to explore American concepts, in which his European sensibility clearly shines through.   This is something that Prince clearly has brought to light in the exhibition. A clear example is in work that incorporates English language text and rock ‘n roll symbols, all displayed in Dahn’s signature hand. 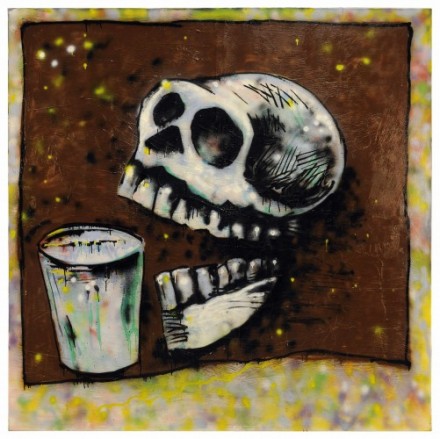 Venus Over Manhattan is setting a new precedent, or perhaps offering the New York art world a fresh perspective on gallery programming, bringing experimental and explorative aspects to a blue-chip gallery uptown. They have featured a range of artists both postmortem established names such as Jack Goldstein and the likes of Salvador Dali. The gallery has also explored the work of mid-career and emerging artist like Andra Ursuta, Betty Tompkins and Peter Coffin. 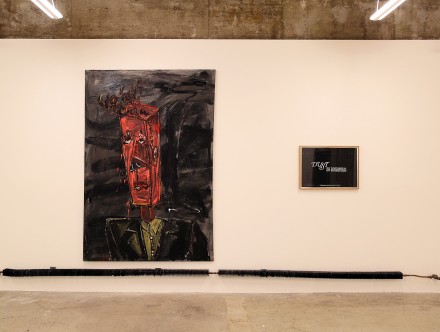 Alongside the exhibition, the gallery has produced a small catalog with a re-print of an interview between Prince and Dahn, originally pubilshed in the Journal of Contemporary Art in 1994.  Prince’s selection of work clashes against the walls of the white gallery space, letting the work speak for itself. In the re-printed interview they speak a lot about music; it is apparent that Dahn’s musical and visual artistry are intertwined. About “Mulheimer Freiheit” he says “We were in this group of painters, it was like a band. We went to every concert we could see.”  One night he and Georg Koboupil made twenty paintings; “You can’t say we were punk painters but we had all the records on and got a lot of stimulation and speed from them.” The catalog is an excellent complement to the exhibition, further highlighting the sentiments friendship between the two artists and the insight that this close relationship bring to the exhibition as a whole.

Walter Dahn is on view at Venus over Manhattan through October 26, 2013.

This entry was posted on Friday, October 18th, 2013 at 12:00 am and is filed under Art News. You can follow any responses to this entry through the RSS 2.0 feed. You can leave a response, or trackback from your own site.