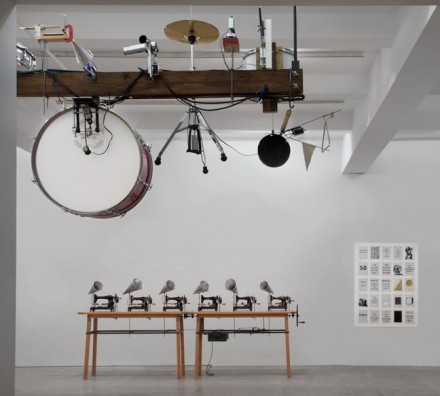 On September 17th, Marian Goodman Gallery opened its new exhibition of films, drawings, sculpture, and prints by William Kentridge. Entitled “Second-hand Reading,” the exhibition will continue through October 26, 2013.  Emerging from a series of projects Kentridge started in 2012 called Six Drawing Lessons, originally showed at The Norton Lectures series at Harvard University that year, the works capture the artist developing a concept of the studio as a place of deep meaning, placing an emphasis on work in the studio as a significant act. During that time he also created his sound installation and breathing machine, entitled The Refusal of Time. 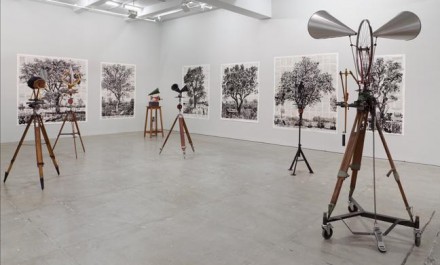 Kentridge’s show follows on the heels of the second performance of Shostakovich’s The Nose at The Metropolitan Opera, featuring Kentridge’s set design and costuming.  Using a whimsical stage design to accompany the comical story of a bureaucrat who loses his nose and must search for the missing appendage, the show was widely praised in 2010, and returns this year with the same cast and designs. 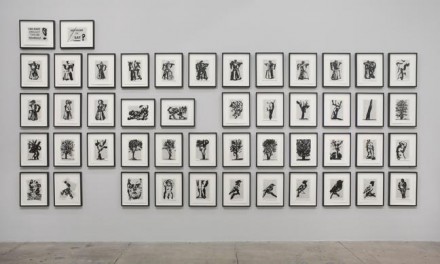 In this exhibition, four different series of work are interwoven to approach a theme of, as Kentridge describes, “taking sense and deconstructing it, taking nonsense and seeing if sense can be constructed from it.”  These dichotomous pieces include ink drawings on book pages, flip-book films and their individual drawings, kinetic sculptures, and linocuts, each approaching dualities of meaning and meaninglessness through their own unique systems of language and rationale.  Among these, Kentridge has created three new flip book films, and framed the drawings that he made to create them, including self-portraits, texts, blocks of color, and calligraphy.  One particular film, entitled Sonnets (2012) is edited to the rhythm of Shakespeare’s Sonnet No. 18, and another is accompanied by drum machine music from Neo Muyanga. 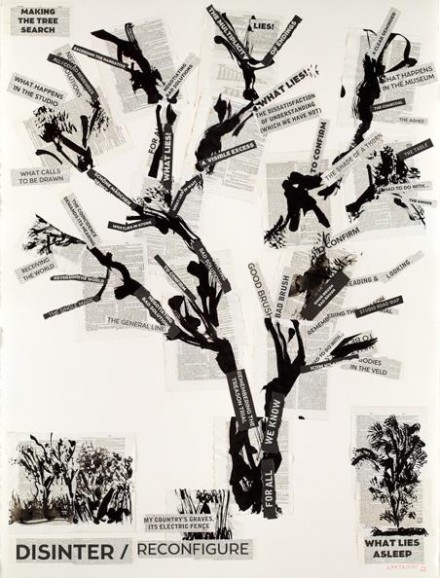 Nearby, a series of bronze sculptures entitled Rebus refer to the metaphorical exchange between pictures and words, often used in the Middle Ages to denote surnames, and conversely in modern times used in word plays or pictograms (such as a picture of an eye to represent the letter “I”). Kentridge’s sculptures are focused on their portrayal of different images when shown at different angles. For example, a nude is created with an image of a stamp and a telephone when placed next to each other. 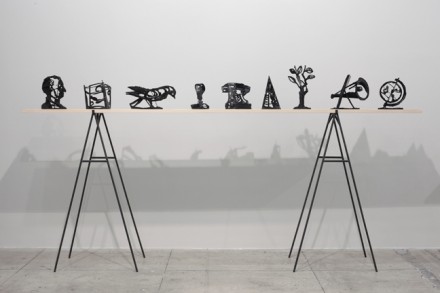 With this body of work, Kentridge touches concepts of mistranslation, fragmentation, imperfect understanding, and the similarities connection between reality and imagination. Examples of the work includes large drawings of trees in Indian ink across pages of books – specifically, found encyclopedia pages. He tears up the pages of these books and rearranges the pieces to create new images, like a puzzle put together in a different way. Each of the bodies of work are meant to run into each other as stream-of-consciousness narrative, spawned from the idea of mistranslation. As Kentridge says, “brush marks of ink drawings turn into linocuts; the two dimensional ink drawings turn into bronze sculptures…the requisitioning of old forms for new uses: encyclopedias are supports fro drawings…the phrases in the drawings push us to make some sense; the Rebus sculptures as hieroglyphs, placed in a line like a line of letters or words or syllables which can be rearranged to make new sentences.”

William Kentridge’s new exhibition will be on view at Marian Goodman Gallery in New York through October 26, 2013. 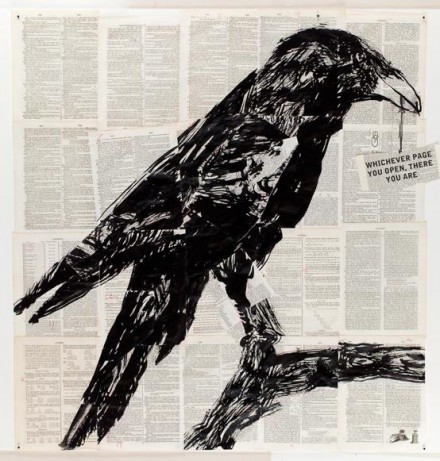 William Kentridge, Return to the Particular Moment (2013), via Marian Goodman

This entry was posted on Monday, October 21st, 2013 at 11:39 pm and is filed under Art News. You can follow any responses to this entry through the RSS 2.0 feed. You can leave a response, or trackback from your own site.