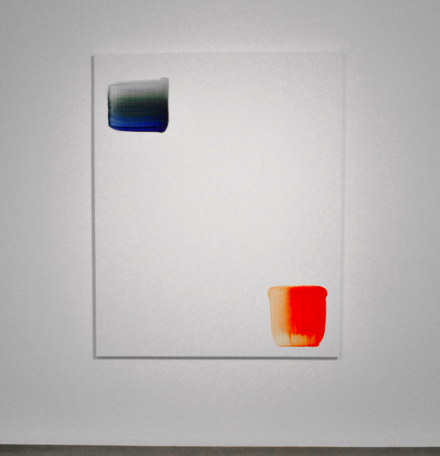 The work of Lee Ufan takes pleasure in simplicity.  Utilizing simple, geometrically-influenced forms, the artist walks a line between the classic theories and demands of post-war minimalism, and more nuanced, organic approach to the forms and materials of the everyday. 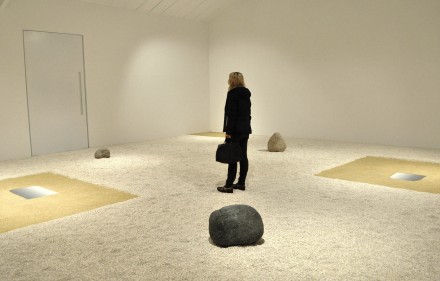 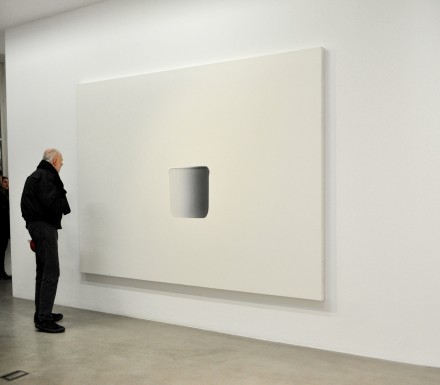 It’s just this dialogue that Lee embraces in his current show, on view at Kamel Mennour in Paris.  In fact, the artist chooses just that word to title most of the works on view, gradients of color confined to a single segment of each canvas, and alternating in its contrast with the white canvas is its painted on.  Focusing on the interplay of the paint’s gradual flow across the spectrum of light, Lee’s work charts the myriad reflections and interplays possible in any given space. 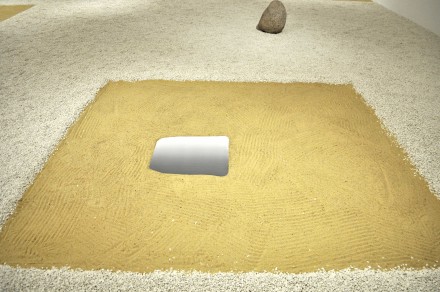 The form, perhaps best described as a 2-dimensional relief of a container of sorts, runs throughout each of the works, occasionally appearing in multiples.  With each mark, the artist seems most interested in examining the contrast produced by a single object, particularly one with a vaguely evocative, almost quotidian aura.  As the viewer alternates between the suspended reality of the object, and the multiple interpretations of space that it gives off, the forms of daily life are brought into a broader reflection on the relation of the viewer to the object, and the object to the human interior. 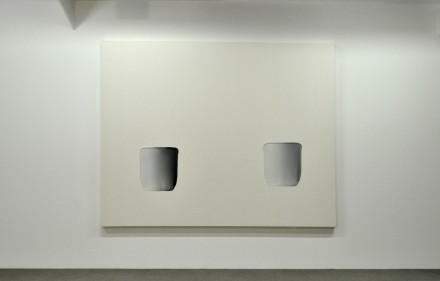 Accompanying the artist’s paintings is an installation, on view in the gallery’s adjacent building, where Lee recreates the imagery and contemplative atmosphere of the Zen rock garden.  Nodding to his studies in Japan, the artist translates his now well-exercised form to a more physical locale, providing a new contemplative environment while altering the relation of the viewer to the image.

For Lee, the installation seems to serve as a counterpoint to his more sterile canvases, allowing the intersection of man and nature, construction and the aleatoric, to serve his work in new contexts.  Pacing through the gallery space, one is struck by the natural interactions of squares, traced on the ground with the artist’s materials, with the forms he created.  Keeping in the mind the artist’s other work nearby, one finds themselves caught between a space that feels wholly new, and one that is locked into past experience. 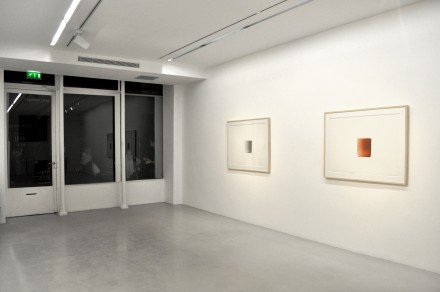 Experimenting with phenomenological constructs and the subtle interplay of group perception, Lee Ufan’s show is a strong inquiry into the artist’s own aesthetic language.  It closes on December 28th. 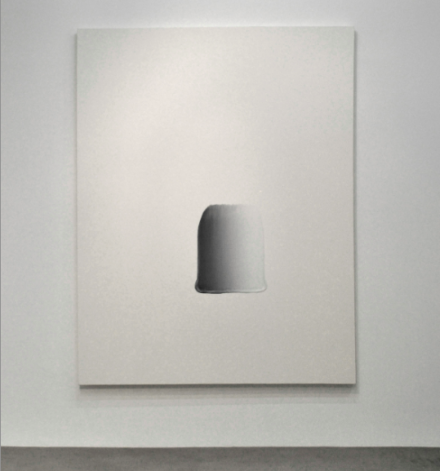 This entry was posted on Monday, November 25th, 2013 at 9:00 am and is filed under Art News. You can follow any responses to this entry through the RSS 2.0 feed. You can leave a response, or trackback from your own site.