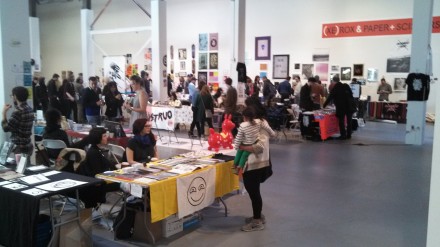 Inside the LA Art Book Fair, via Art Observed

Despite its size and immense popularity, the LA Art Book Fair is only two years old. Originally a New York function based out in MoMA’s PS1 satellite location, the dramatic growth of the fair has led to a second location across the country . Conceived by artist AA Bronson and Printed Matter, the Book Fair is not necessarily art-world exclusive, aiming to continue Printed Matter’s dedication to the “dissemination, understanding and appreciation of artists’s books.” Indeed, respected art world publishers such as Mörel Books and Primary Information were in attendance, but one of the primary concentrations of the LA Book Fair once again focused on the grassroots, DIY zines that gave voice to subculture interests on the fringe of the arts community from the 1970’s until today.

Shannon Michael Cane, curator of Editions at Printed Matter, credits Jeffrey Deitch, former director of Museum of Contemporary Art, Los Angeles with success of the Fair’s move to the West Coast. “Over 9,000 people showed up yesterday. We work in kind of an insular community so for a lot of people this seems like a subculture but there is an overall thirst for knowledge. It’s exciting to interact with a public beyond the typical art fair.” 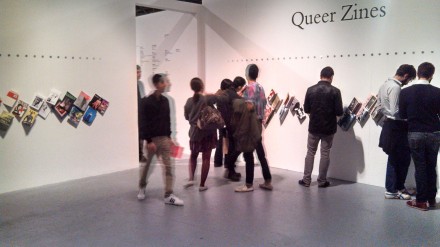 The fair covered the whole of the Geffen Contemporary warehouse building, with an array of unique, editioned and often hard-to-find art books, editions and objects. Bronson and Philip Aarons also curated a special “Queer Zines Exhibition,” focusing on archived gay and lesbian work, and mapping their trajectory towards better-known millennial publications such as BUTT Magazine or Teen Witch. Beyond the sprawl of publishers and gallerists, in the furthermost room was (XE)Rox & Paper + Scissors, a space highlighting the work of local and international zinesters. 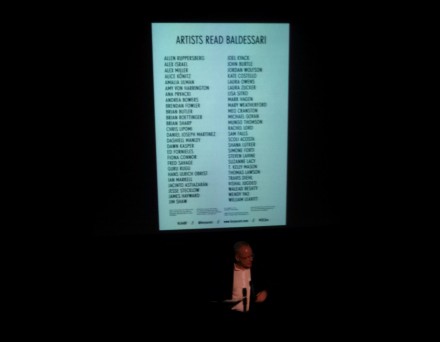 On Sunday, February 2, ForYourArt organized Artists Read Baldessari, a celebration of the upcoming two-volume set of More Than You Wanted to Know About John Baldessari, edited by Meg Cranston and curator Hans Ulrich Olbrist. The celebration consisted of over fifty of the artist’s contemporaries reading old and new works, including previously unpublished texts.  In keeping with Baldessari’s own work, the artists present, such as painter Jim Shaw, CalArts Dean Thomas Lawson, Whitney Biennial alum Dawn Kaspar, and James Hayward, among others, represented a wide variety of practices. 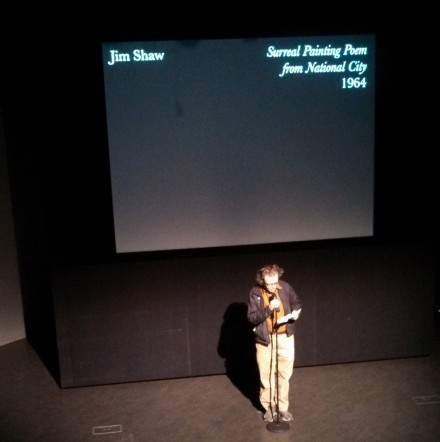 What could have turned into a kind of “live-retrospective,” (Baldessari himself was present for the entire event, dressed in black, sitting in the lowermost seat of the auditorium) instead offered fleeting revitalizations of older works. Some chose to honor the original presentation of the work, such as musician Simone Forti who read I am Making Art (1971) inside a rectangular spotlight wherein she performed the act of painting and spoke the famous series of inflections. Others took more casual approaches; Rachel Lord sang Renoir Story (1973) to the tune of Miley Cyrus’ “Wreckingball,” Andrew Bowers chose Art Disasters (1973), brazenly wearing a handmade tee-shirt which read, “FREE JULIAN ASSANGE, FREE EDWARD SNOWDEN,” and Sam Falls took the opportunity to illustrate parallels to his own work with California Map Project (1969).

Taken together, the two events offered a striking entry into the continued practices of text and book art, combined with a live archival practice that made the pair of events a fitting complement.

This entry was posted on Sunday, February 9th, 2014 at 8:26 pm and is filed under Art Fair, Art News. You can follow any responses to this entry through the RSS 2.0 feed. You can leave a response, or trackback from your own site.