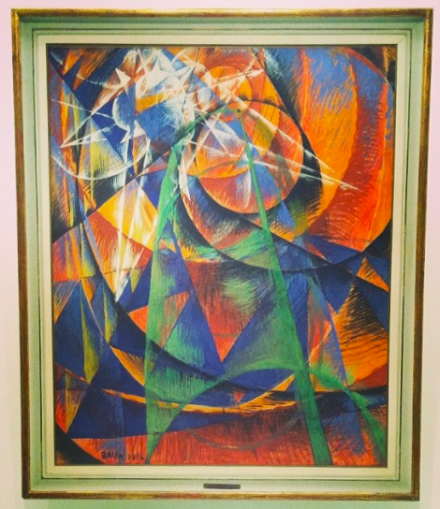 Giacomo Balla, Mercury Passing Before the Sun (1914), via Art Observed

From the opening lines of the The Futurist Manifesto, on view near the ground floor of the Guggenheim’s current historical survey of the early 20th century Italian avant-garde, one can detect a certain mechanistic determinism, a powerful, single-minded focus on the power of industry, science and machines.  F.T. Marinetti’s famous lines summon the roar of the engine, and the hum of electricity in equal measure, damning an Italy obsessed with its own past, and embracing a new future as a world power.

The Guggenheim’s presentation does a strong job of presenting the Futurists in all their political complexity.  The artist group’s ties to the rise of the Italian Fascist party is not shied away from, but is rather presented as an analog to the various nationalist forces running throughout Europe during the era, and their work is allowed to stand on its own while not forgetting its own history. 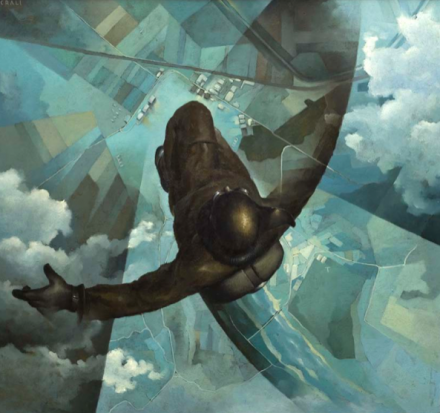 This is a significant point. Like few movements in art history, the Futurists’s conception of industrial and cultural progress creates a fascinating linear narrative of their work, taking the political and social environments of the day as part of their inspiration.  The embrace of Impressionism, then Cubism as well as more abstract innovations in sound, photography and film all mark the history of the movement with startling historical precision.  Of special note is Umberto Boccioni’s States of Mind, a gorgeous triptych paying homage to both the newly developed railways of Italy, and the techniques of Picasso, as are the stage directions and designs for several pieces by Stravinsky by Giacomo Balla and Fortunato Depero, utilizing imaginative costumes and displays of enormous, flashing lights.  One only observed the work of a young Walt Disney (a la Fantasia) to understand the impact these early experiments had on the world stage. 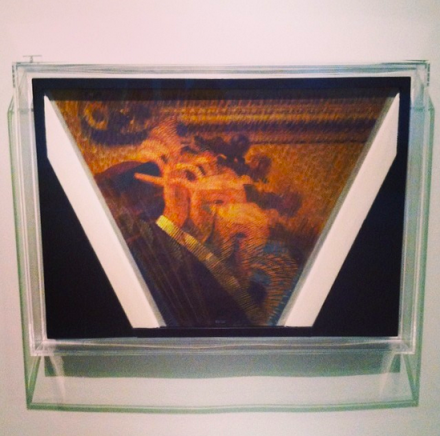 Giacomo Balla, The Hand of the Violinist (1912), via Art Observed

There’s something particularly fascinating about the way that electricity, sound and mechanical power is represented, particularly as the show progresses.  While making the mechanical forces of modernity their subject from the start, the futurists’ depictions of these forces take a fascinating turn as the second generation of artists enter the fray.  Perhaps aided by the growing availability of electric detection devices like the oscilloscope, the visual representations of electricity suddenly seem to fall directly in line with those depicted in the textbooks of mechanical physics.

Kinetic force, once an abstract rendered on canvas, becomes a tangible aesthetic device, tied directly to its own scientific depiction.  It’s at this same point that the propagandistic ideals of the futurists reach their pinnacle.  In Benedetta’s remarkable murals from the Palermo post office, the masterful incorporation of sine waves and radio static into the utopian montages makes for an ever-more powerful, inspiring and dramatic rhetoric. 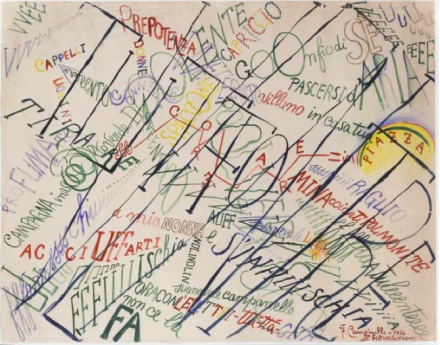 Equally, the idea of power, of force is offered to man in equal measure.  The plentiful homages to Marinetti in the later years of the exhibition frequently place him as a source of electric or acoustic energy (one work goes so far as to call him The Loudspeaker).  To the Futurists, their own rhetoric ultimately reshapes their self image, and the mechanic aspirations of their early years reach a creative zenith.

The Futurist ideal, while not officially espoused by Mussolini and the fascists, makes for a fascinating study in the atmosphere of Europe between the World Wars.  A ubiquitous presence at national rallies and a propagandistic force for Italian nationalism, the works of the Futurists found fertile soil in a nation longing once more for industrial and cultural might.  Accordingly, in an effort to make themselves ever closer to machines, the Futurists, like almost no other European avant-garde before them, encountered an almost inhuman efficiency in their aesthetic and social goals.  The results, on view this spring at the Guggenheim, are equally inspiring and terrifying.

Italian Futurism: Reconstructing the Universe is on view through September 1st.

This entry was posted on Monday, March 10th, 2014 at 3:13 pm and is filed under Art News. You can follow any responses to this entry through the RSS 2.0 feed. You can leave a response, or trackback from your own site.