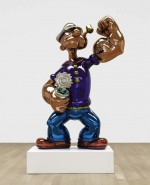 Jeff Koons’s colorful 2009 Popeye sculpture, never before seen publicly, nor offered at auction, will stand as one of the centerpieces at Sotheby’s May 14th auction in New York, estimated to sell at $25 million.  “The history of Pop Art begins and ends with Popeye,” says Alex Rotter, Co-Head of Sotheby’s Worldwide Contemporary Art Department.  “From his first representations by Roy Lichtenstein and Andy Warhol in the 1960s, to the present three-dimensional crescendo by Jeff Koons a half century later, this ultimate American hero and self-made man has remained a true icon of both art history and popular culture.” Read more at Art Daily

This entry was posted on Monday, April 14th, 2014 at 9:26 pm and is filed under Art News. You can follow any responses to this entry through the RSS 2.0 feed. You can leave a response, or trackback from your own site.