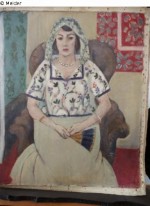 An Henri Matisse painting from the collection of Cornelius Gurlitt has been confirmed as Nazi loot, the Art Newspaper reports.  A task-force has uncovered that the 1921 work Femme Assise was taken from the collection of the Paris-based dealer Paul Rosenberg.  “Even though it could not be documented with absolute certainty how the work came into [Cornelius Gurlitt’s father] Hildebrand Gurlitt’s possession, the task force has concluded that the work is Nazi loot and was taken from its rightful owner Paul Rosenberg,” says researcher Ingeborg Berggreen Merkel.

This entry was posted on Saturday, June 14th, 2014 at 4:00 pm and is filed under Art News. You can follow any responses to this entry through the RSS 2.0 feed. You can leave a response, or trackback from your own site.