Working in collaboration with the Centre Pompidou Paris, the Museum Ludwig is showing a major retrospective of Pierre Huyghe, containing over 60 works and projects. When the exhibition was previously set up in Paris, Huyghe took the layout of the previous show, dedicated to Mike Kelley, and transformed it by moving and cutting walls inside the space. When the show moved to Cologne, he cut the pieces out of the walls of Pompidou and reassembled them in a sort of collage. This dissection and reassembly reflects Huyghe’s exploration of the reliance of art on time and specific events. The works he displays carry with them their own physical timelines. 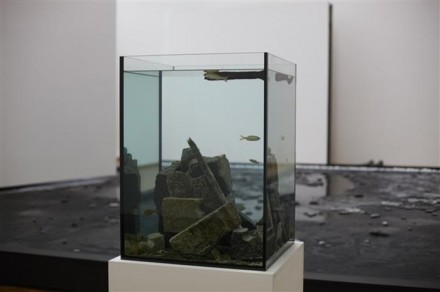 Huyghe is first and foremost a conceptual artist, always seeking out the proper medium to convey his purpose. Throughout the exhibition, he employs a wide range of formats, from photography to sculpture to living beings. An outdoor garden houses a nude reclining sculpture among the plants, for example, and an aquarium of fish sits beside L’Expédition scintillante, Act III (Black Ice Stage), a work consisting of a slowly melting ice rink. Wandering around the whole exhibition space is Human, a white whippet with a pink right front leg, a part of the dOCUMENTA 13 show, and the first dog the Museum Ludwig has allowed within its halls. Sometimes he sleeps beside a man whose face is covered by panels of light, sometimes he walks through the garden or sits on a cushion in the film hall. With the dog free to roam, and the state of the ice on the rink gradually changing, each visit to the exhibition allows the viewer to interact with the works in a different way. 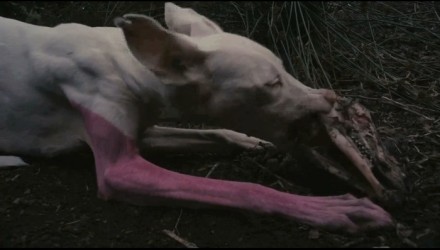 In another section of the gallery, Huyghe has peeled away layers of paint on the gallery wall. In a video made by the Museum Ludwig, Katia Baudin, Deputy Director of the museum, compares the exposed layers to the rings of a tree, showing that even the seemingly static gallery space is organic, growing layer by layer over the years. Through this interaction with the space it occupies, Huyghe’s work questions the spatial boundaries of art and shows the physicality of the passage of time. 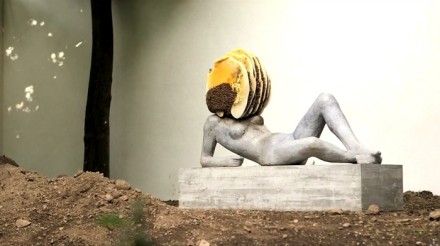 Huyghe has created an entire world within the walls of the Museum Ludwig. There is a pulsating life emanating from the art works, and both the living and nonliving components are organic in the context of this world. Baudin says of the constantly metamorphosing show, “Every time you experience the exhibition in a new way… This exhibition is just like life; it is a continual principle.” 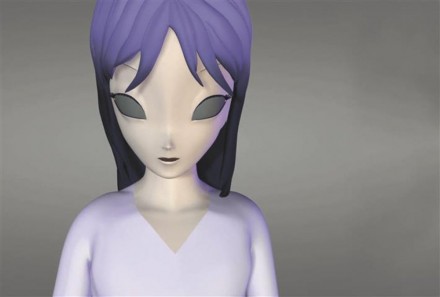 Pierre Huyghe, Two Minutes Out of Time (2000), via Museum Ludwig 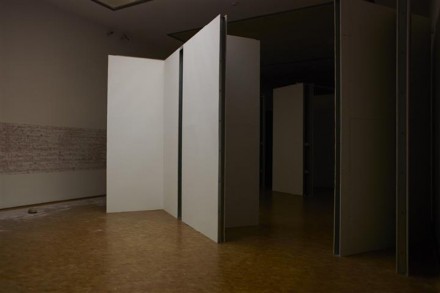 This entry was posted on Saturday, July 12th, 2014 at 12:00 am and is filed under Art News. You can follow any responses to this entry through the RSS 2.0 feed. You can leave a response, or trackback from your own site.