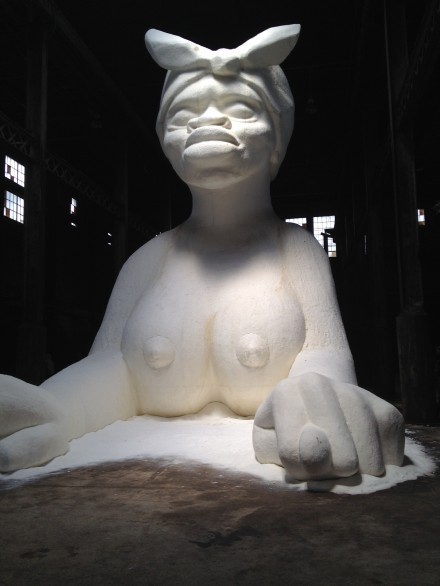 Kara Walker, A Subtlety (2014) all images via Osman Can Yerebakan for Art Observed

Since her debut at The Drawing Center in 1994, Kara Walker has been one of the most prolific American artists of African descent, delivering an ambitious oeuvre on the politics of race, gender and identity. As with contemporaries such as Lorna Simpson and Mickalene Thomas, who address similar subject matter, the artist has continuously mined history to reveal the untold micro-histories of those that are neglected and enslaved, reflecting on the representation of Black history in the U.S. and abroad. Her infamous cut-paper silhouettes narrating the stories of anguish and abuse in African-American history have earned the California-born, New York based artist a singular position in the contemporary art dialogue. 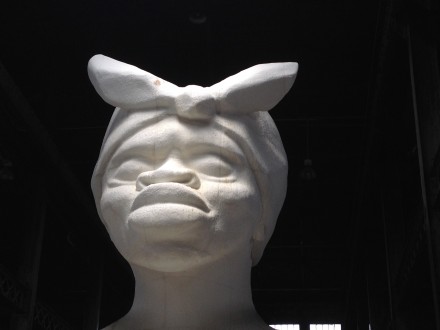 Kara Walker, A Subtlety (2014)On view at Domino Sugar Factory in Williamsburg, Brooklyn until the 6th of July (just before its demolition) is A Subtlety, the grandiose outcome of Walker’s collaboration with Creative Time. The hundred and fifty-eight year old sugar refinery has been one of the emblems of the industrialization in America, at one point providing more than half of the sugar consumed in the country a few years after its construction.  But the main element in sugar production, sugar canes, were constantly delivered to the factory from all around the world, carrying with it the invisible narratives of slave laborers working to facilitate the movement of sugar cane across the globe, and into the homes of millions of Americans. Walker’s ode to those African slaves brought in to work in these fields in barbarous conditions is embodied in a sumptuous sculpture made using white sugar. 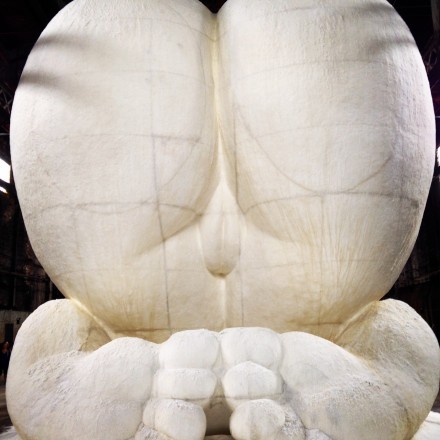 A hybrid of an Egyptian sphinx and a stereotypical figure of an African-American woman, the sculpture is sitting in a cat-like, almost seductive position, confidently bearing her vulva in the back and her large breasts in the front, but still carrying the head scarf related to the stereotype of a domestic and caring black slave maid, especially common in classic Hollywood films and food advertisement.  The figure’s distortion of two different models attached to the black female body – voluptuous sex object and caring house maid – are deliberately conflicted in one body through another element: the sugar itself. Walker internalizes these stereotypes in one form to confront these oppressive constructs of race and gender. Strengthening the satirical nature of the artist’s argument, the sculpture’s left hand is forming a fist with her thumb thrusted between her index finger and middle finger. Mostly referred as the ‘fig sign’, this gesture has a charge of obscenity, commonly used in an array of cultures to signify strong discontent and confrontation in addition to perpetuating mockery and ridicule.

Accompanying the colossal size sculpture is a series of little boys made out of molasses, and carrying baskets and bananas. Inspired by tchotchkes Walker came across online, these life size figures serve as the ideal supplementaries to the grandness of the female figure, with their amiable innocence yet dramatic presence. 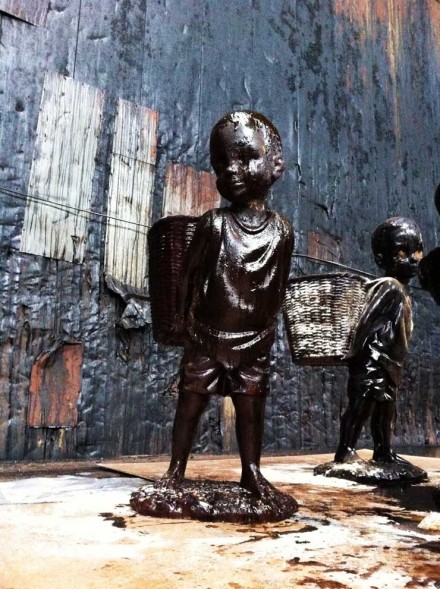 The white sugar in Walker’s context subtly symbolizes less than sweet matters springing from centuries of slave labor on both sides of the Atlantic.  Walker’s work here is almost totemic, a focal point for the various symbols of dehumanization and abuse that was the natural extension of slave labor, all brought to bear on a single, monumental white statue.   Originally a brown ingredient, sugar, with its whitening process stands out equally as a potent metaphor to the notion of white-washing, suggesting a more-than-willing impulse to obscure the oppressive politics of the early industrial age of food production and economics in the United States at large. 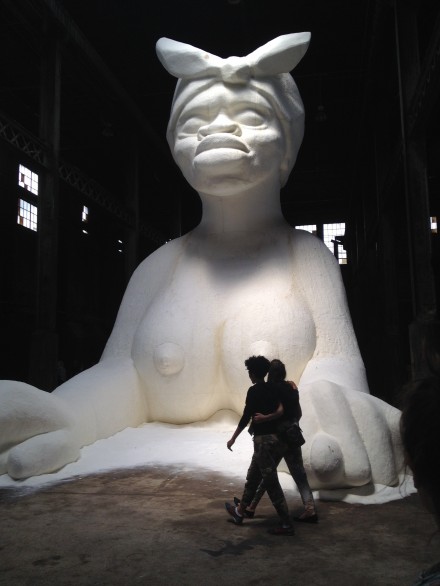 A common term in English language, “sugar-coating” fits exceptionally well here to summarize the artist’s attempt at provoking her viewers into contemplation on these significant issues, all emphasized by the gleaming white color and sickly sweet scent of her artistic material.  Kara Walker: A Subtlety is on view at Domino Sugar Factory through July 6, 2014.

This entry was posted on Thursday, July 3rd, 2014 at 12:00 am and is filed under AO On Site. You can follow any responses to this entry through the RSS 2.0 feed. You can leave a response, or trackback from your own site.