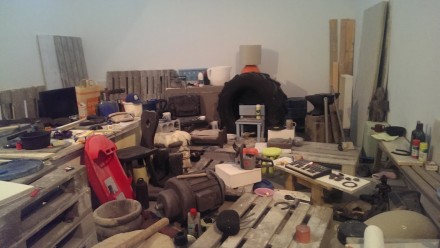 The ongoing collaboration of Swiss duo Peter Fischli and David Weiss has yielded countless material explorations: chain reactions and careful reproductions of various objects and spaces that introduce a momentary reflection on construction, industry and use.  But rarely have the artists’ objects taken on the state of historical document in the manner that they do in their most recent show at Sprüth Magers, turning back from their respective intentions to become historical documents of their own. 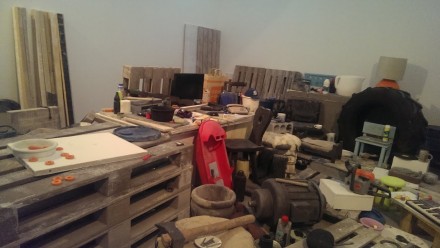 Over the past thirty years Fischli/Weiss have created a range of objects cast in polyurethane, and meticulously repainted to mimic the original object.  The result is a wholly manufactured object which makes much of its industrial reproduction of a real model.  Sleds, engine parts, telephones, pieces of freshly cut wood, and even toy keyboards get the Fischli/Weiss treatment, converted into lifeless plastic pieces that look shockingly ready to use.  Here, the artist’s take a simplistic take to examining this practice, and rather than present a retrospective look at their work in this field, merely cluster the works together in a single space, leaving little room for movement. 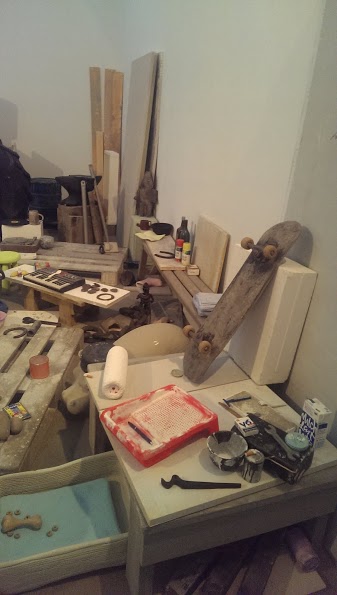 The result is a sensation of disarray and manic disorganization, bearing more of a resemblance to a storage warehouse than a gallery, and one almost feels as if an interested buyer could walk into the space, wade through a few pieces before selecting one by hand and leaving.  It’s a striking, almost irreverent take on the artists’ own body of work, as much as it is a take-off on the gallery retrospective itself.  But rather than merely rely on a singular critique of the space of exhibition, and the nature of the contemporary art retrospective, Fischli/Weiss allow an extended view of their own collaborative history.  The pair’s output is here presented as a mass of its own, rather than a series of pieces chosen for historical significance or availability.  The sheer weight and density of their materials, assembled in an almost impenetrable array, places the viewer at the mercy of their own output.  The body of work takes on real dimensions, laid out in the gallery as a mass of its own. 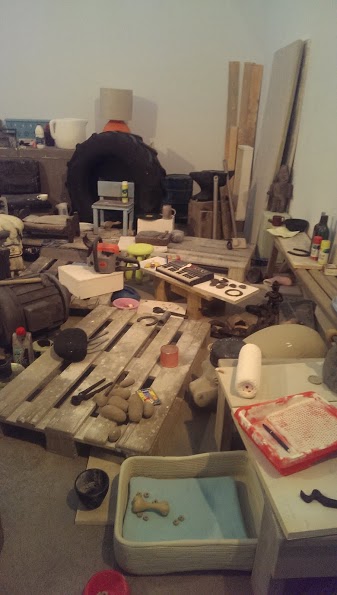 The turns inherent in an exhibition like this one are interesting their own right as well.  Fischli/Weiss effectively turn the intended purpose of each piece several times through.  From real, utilitarian objects, the artist’s had previously left the forms useless outside of being art objects.  But returning the works to same clustered nature one might find their original models in, the works, to a certain degree, lose even that utility as an art object, deprived of an up-close interaction with a viewer.  As Fischli/Weiss return the works to a more sincere natural arrangement, the notion of uselessness changes, and the works manage to reclaim some of their original appearance as a real object in the outside world. 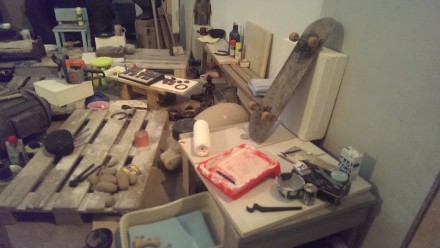 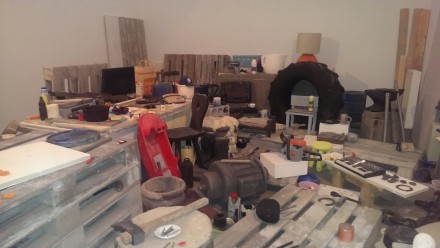 Moving through states of use, affect and materiality, the hyper-loaded exhibition is on view through August 30th.

This entry was posted on Friday, August 22nd, 2014 at 12:00 am and is filed under Art News. You can follow any responses to this entry through the RSS 2.0 feed. You can leave a response, or trackback from your own site.