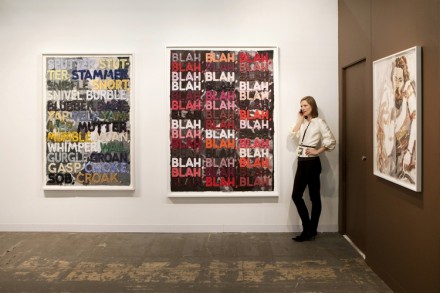 On view at Andrea Meislin Gallery is Andy Freeberg’s second solo exhibition at the gallery, a series of photographic works that mark the continuation of his investigation into the intersections between art, commerce and personality.  Entitled Art Fare, Freeberg’s newest show targets the moments of banality inherent in the blue-chip world of major international art fairs. 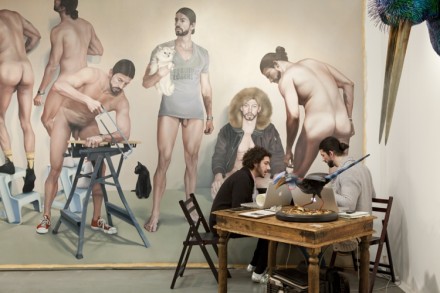 Through a series of fleeting, quickly executed photographs, Freeburg documents the moments and interactions at some of the world’s largest art fairs, including Art Basel and The Armory Show.  He captures the moments that are often little noticed, or at least given little emphasis. His works highlight gallery workers setting up booths, dealers on the phone ignoring their coworkers, and interactions between artists and collectors. In the background are key artworks on display at major galleries, dwarfing the people of supposed power who stand in the foreground. 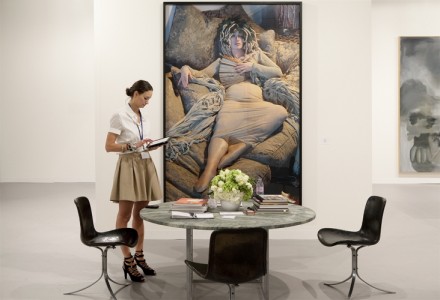 At the same time, the works have a distinct impression of being staged, although they are purely captured in a documentary style. Due to the exquisite lighting of the gallery spaces and the emptiness of the spaces, the photographs take on a cinematic quality, all the more emphasized by the often remarkable poses and positions that gallerists take throughout the show. Freeberg calls the photographs “living dioramas where the art world plays itself.” No need for set design, costumes, or lighting was needed. 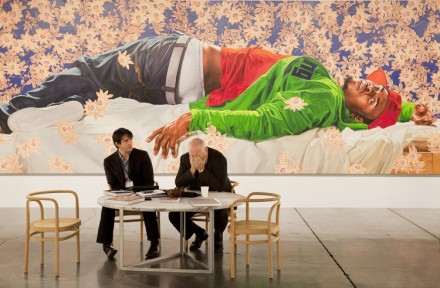 The photographs are often ironic, witty, and subversive, “[contemplating] the performance aspect of the art market.” The moments Freeberg captures are highly astute, and his composition reflects his experienced eye – experienced both in art world psychology as well as in the art of photography itself.  At the same time, the moments of boredom and downtime during the fair can be distinctly felt. 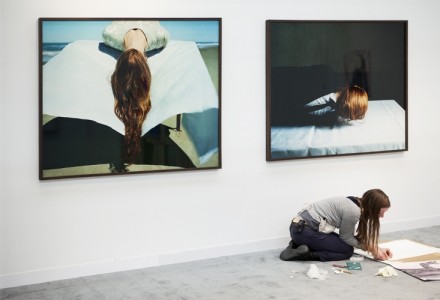 Born in 1958 in New York City, Freeberg studied at the University of Michigan and afterward returned to New York where he worked as a portrait photographer for publications such as The Village Voice, Rolling Stone, and Time. His work has been exhibited in solo exhibitions at institutions including the State Museum of History St. Petersburg, Russia; Photographic Center Northwest, Seattle; and Stanford University’s Cantor Arts Center, Stanford. His work is included in museum collections including the San Francisco Museum of Modern Art, the Museum of Fine Arts Houston, the Museum of Fine Arts Boston, and the Portland Museum of Art.

Art Fare will continue at Andrea Meislin Gallery in New York through August 8, 2014. 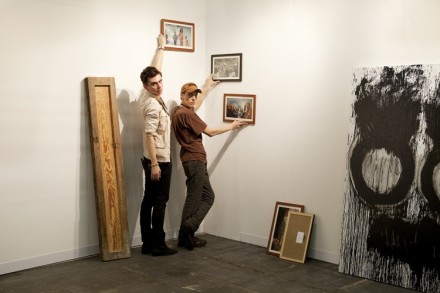 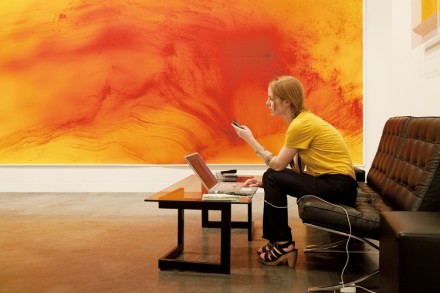 This entry was posted on Tuesday, August 5th, 2014 at 12:00 am and is filed under Art News. You can follow any responses to this entry through the RSS 2.0 feed. You can leave a response, or trackback from your own site.