New York – “Degenerate Art: The Attack on Modern Art in Nazi Germany, 1937″ at the Neue Galerie Through September 1st, 2014 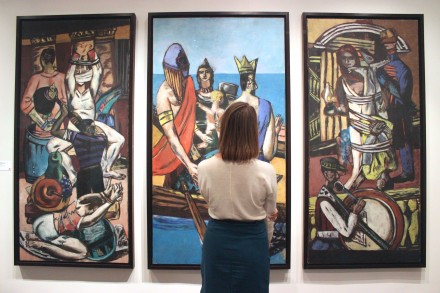 A viewer looking at Max Beckmann’s Departure (1932-1933), All Images via Kelly Lee for Art Observed

As much as it was an act of overt political action, the 1937 exhibition Entartete Kunst (Degenerate Art) in Munich marked a pivotal juncture in German art.  Intended as an outright attack on the careers of artists like Emil Nolde, Marc Chagall, Paul Klee, Wassily Kandinsky, Georg Grosz and many more, the original exhibition crammed hundreds of works together for a mocking, derision-filled critique of the perversions and mistakes of the modernist practice. 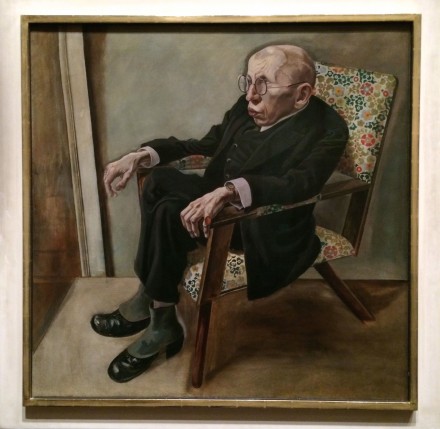 It’s this historical moment in Germany that sits at the center of the Neue Galerie’s immensely popular exhibition Degenerate Art: The Attack on Modern Art in Nazi Germany, 1937, currently on through the end of the summer.  Taking a condensed, focused look at the original exhibition and the conflicting school of art embraced by the Nazi party in the years immediately preceding WWII, the work is equal parts re-creation and historical recontextualization.  Video documentation, works from the original exhibition and other related works come together to explore not only the show itself, but its wider historical moorings, addressing the decades of cultural fallout from Nazi repression in equal measure. 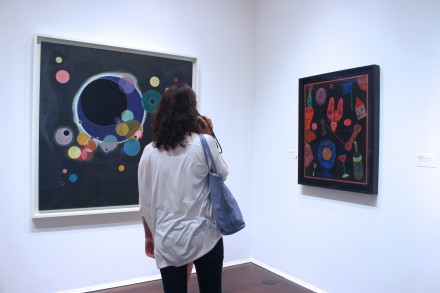 Included in the exhibition are a number of impressive and historically cogent works, charting a remarkable survey of the techniques and influences of German Modernism both in contrast and in conjunction with the Nazi party’s stance on Modernism.  Asian and African sculptural techniques are incorporated into the approach of the German avant-garde, and often set them diametrically opposed to the official party line.  Wassily Kandinsky’s Several Circles, for instance, utilizes a masterful fusion of light, colorful orbs and spatial intersections that completely ignore the human body, underlines the Nazi party’s war on the Bauhaus in particular.  Kandinsky’s work was on view in the original exhibition and later passed into the collection of dealer Hildebrand Gurlitt (father of the late Cornelius Gurlitt), before its return to its original owners.  Nearby, a set of Paul Klee pieces counter Kandinsky’s massive colors with simple, elegant lines, such as his works Twittering Machine and The Angler. 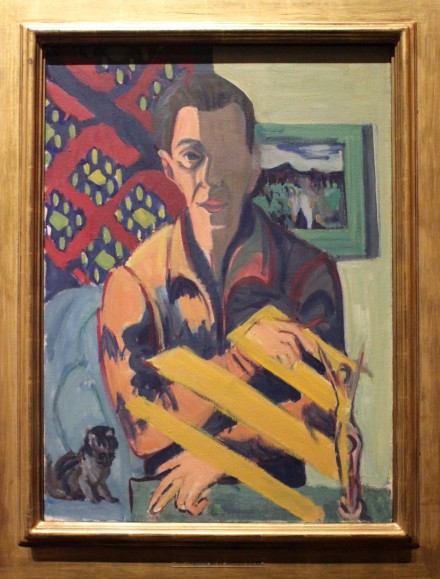 Presented with ample historical reference, the exhibition makes much of the Nazi revulsion towards formal innovation.  A prioritization of the heroic, perfected body was at the center of the party’s propagandistic mission, and this priority naturally extended into the art world, where Hitler’s political rhetoric ruled out any attempt at jagged, roughshod or abstract figuration, regardless of the artist’s own political agendas (Emil Nolde himself was actually a Nazi supporter, but his artistic practice ultimately placed him alongside the rest of the “degenerates”).  Equally, Ernst Kirchner’s vivid canvases and Karl Schmidt-Rottluff’s figurative explorations in turn mark a powerful moment in German art history,  but found themselves on the wrong side of the German political agenda at their time. 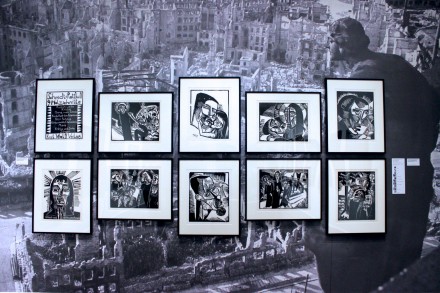 Karl Schmidt-Rottluff, The Life of Christ (1918)

Nowhere is this more powerfully illustrated than a single room at the top of the institution, where works from the original Degenerate Art show are exhibited alongside a set of Nazi-praised works from the same era.  On one side of the room, a set of idealistic, bold German features stare somberly across at the vibrant, impressionistic works of their contemporaries.  Richard Scheibe’s Decathelete, a perfect homage to the Greco-Roman ideal with a meticulously triangular torso and striking features, stares impassively across at Ernst Barlach’s Berserker, a sculpture that exchanges perfect body form for a meticulous study in position and movement.  Even Nazi party officials found themselves torn over Barlach’s sculpture, whose depiction of a Central Asian warrior was panned, despite praise for its dynamic expressionism. 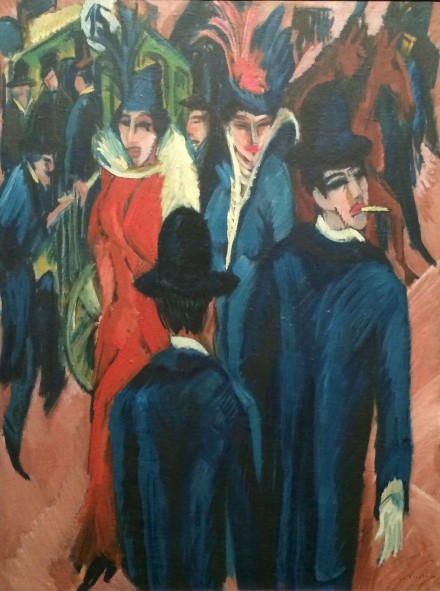 It’s this interplay that makes the Neue Galerie show so engaging, marking an incisive inquiry into the core political issues at play in Germany and Europe at large in the run-up to World War II.  In the political environment of Nazi Germany, the elevation of form and figuration becomes an intensely political sphere, and as the Nazi political agenda extended over the body itself, the act of abstraction ultimately took on a subversive, dangerous undertone in and of itself.  The power of depiction and expression, a central aspect of the Nazi rise to power, and its aesthetic agenda underlines the full scope of its impact on German culture. 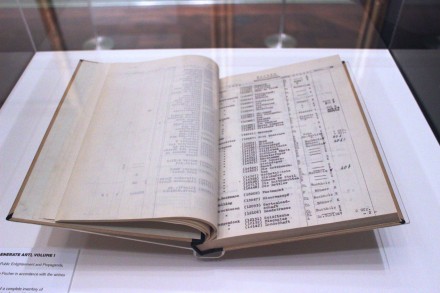 This conflict carries over into the second floor of the museum, where the curators have assembled a powerful homage to the devastating effects of the Nazi regime.  In one room, portraits of Jewish intellectuals and artists persecuted during the years of Nazi power in Germany are shown on view with the Mauerbach frames, a set of ornate frames stripped of their artworks when they were plundered by the German government.  The works inside the frames were never recovered, and the frames stand empty, a testament to the loss of peerless artwork and the nearly incomprehensible human cost of the Nazi regime.  For all its rhetorical emphasis on the artistic ideal, the political emphasis of the original Degenerate Art exhibition in Munich carried a series of dangerous consequences, ones which are still playing out today, and which the Neue Galerie makes  powerfully explicit. 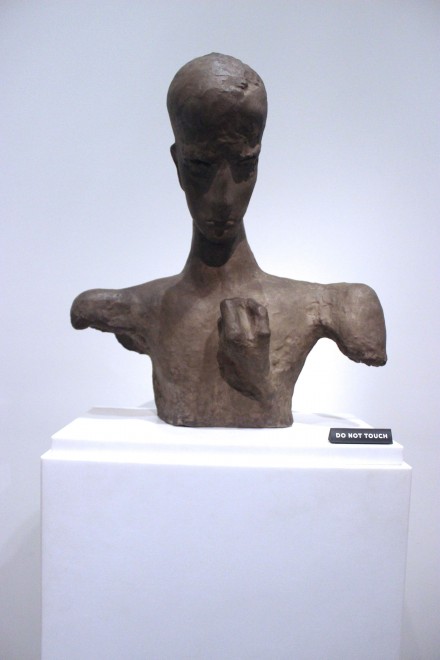 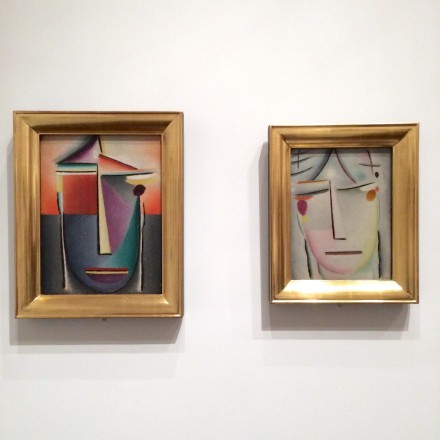 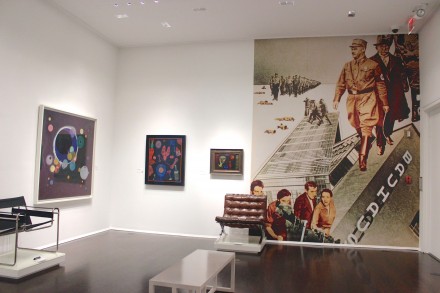 This entry was posted on Saturday, August 9th, 2014 at 12:00 am and is filed under Art News. You can follow any responses to this entry through the RSS 2.0 feed. You can leave a response, or trackback from your own site.