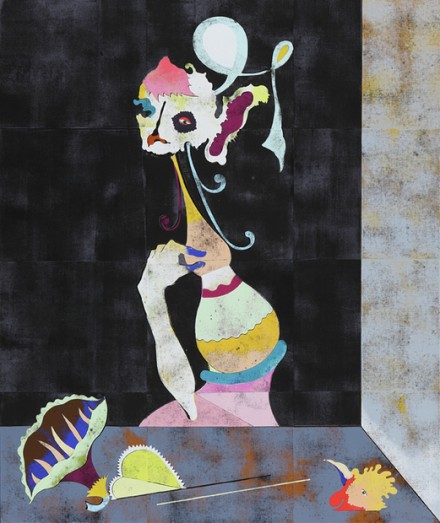 In their second solo exhibition at Maureen Paley, Gert & Uwe Tobias have brought a new selection of their mesmerizing woodcuts and collages. With a collection of fantastical characters printed on dark backgrounds, the woodcuts exemplify the tension between the fanciful and the terrifying present in fairy tales and folklore.  These passed-down stories, as told in countless variations, have a tone that is at once childlike and unsettling, a contrast that the Tobias brothers exploit in their work. 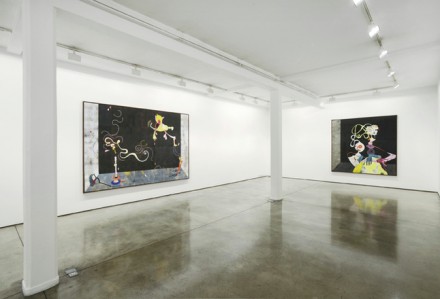 Gert & Uwe Tobias, identical twin brothers, were born in the Transylvanian region of Romania, known widely as the setting for Bram Stoker’s Dracula. Despite the region’s infamy, the brothers only heard of Dracula after they left Romania for Germany, where they still live and work. Their subject matter is largely drawn from the folklore, myth, and traditions of eastern Europe, evident in their parade of surreal characters and the motifs of flowers and patterns appearing throughout their works.  Working together since 2001, the brothers have built an entire world of creatures using various media, including woodcuts, collages, ceramics, and embroidery. The characters in the woodcuts are most often rendered in a simple block-like fashion, exaggerated in their form and brightly colored on a dark monochrome background. Combining a diverse range of influences in their work, their images join elements of surrealism and folk art with abstract and geometric styles. 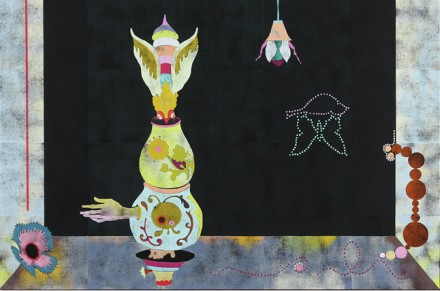 However, diverging from previous exhibitions, the Tobias brothers’ collages and paintings here also build on plain, dark background.  Splashes of pastel colors emerge from disjointed figures floating on the canvas, and the works here more frequently indulge in loosely expressive marks.  A bird’s body, severed at the torso, is the root of one cloud of color, while across the canvas, a harpy’s body takes shape in a swirl of purple and white, while a woman’s face and an outstretched wing on either side lend disjointed, yet concrete elements to the composition. 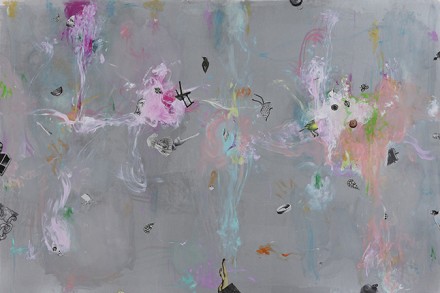 Just as their works are an amalgam of stylistic influences, the creatures they depict are often a composite of features and body parts. In one untitled woodcut from their current exhibition, a bird-like creature is perched atop two long legs, capped with skeletal claws and joined by two dotted lines into a single leg bone. Headless, the creature appears to be dripping onto the floor. At the other end of the room, a disembodied hand is curved into a C.  In another woodcut, a hollow, vase-like structure is perched near the center of the room.  Closer inspection shows a hand emerging from the side and a boy’s head peeking out of the bottom. The geometric, abstract, and pieced-together bodies of the creatures take away some of the frightening oddness of their forms, reducing them to reproducible, graffiti-like figures. 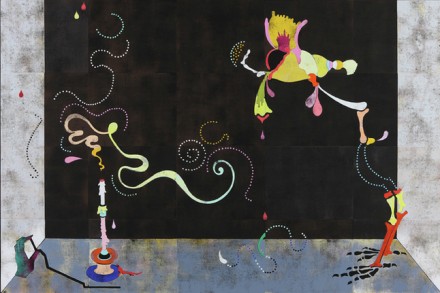 The elements of each work, taken separately, are cheery, brightly colored patterns; while taken together, there is an element of investigative indeterminacy that arises—What is happening? What will happen? There is an uncertainty surrounding the unfamiliarity of the creatures, whether they are the heroes or villains in the fairy tales spontaneously arising in the viewers’ minds.

The exhibition of new works by Gert and Uwe Tobias is on view through October 6th. 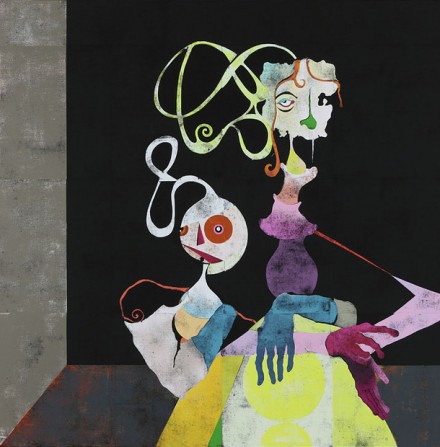 This entry was posted on Monday, September 29th, 2014 at 12:00 am and is filed under Art News. You can follow any responses to this entry through the RSS 2.0 feed. You can leave a response, or trackback from your own site.