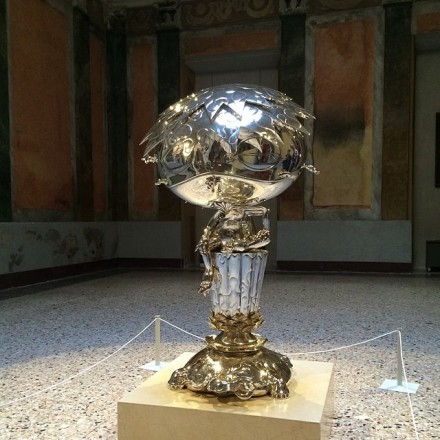 After more than a decade, Takashi Murakami has returned to Italy for an exhibition of his Arhat Cycle. The father of the Superflat movement, Murakami’s most recent work blends his signature style, in which he usually combines traditional elements of Japanese culture with consumeristic pop-culture imagery, into a series of paintings and sculptures depicting the artist alongside a dizzying cast of surreal characters. 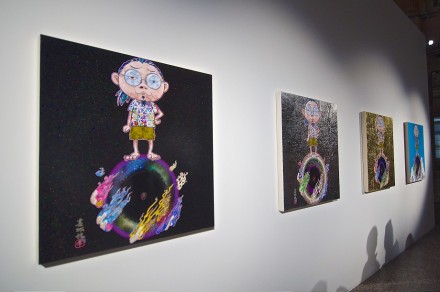 Takashi Murakami, Arhat Cycle (Installation View)Presented as the continuation of Murakami’s 2012 Qatar show Ego, which combined slight references towards the Fukushima nuclear disaster with his signature pop culture elements, the exhibition in Milan’s Palazzo Reale introduces large scale paintings in which arhats (those who have reached to the ultimate stage of Buddhist enlightenment) are depicted as wanderers of phantasmagoric landscape.  Organized by the famed Italian curator Francesco Bonami, Murakami’s studio Kaikai Kiki and Blum & Poe, the selection presents his densely colorful and undeniably joyful depictions, oriented in conjunction with the impressive architecture of the historic building, an exercise in orchestration of Eastern and Western aesthetics. Oval Buddha Silver, a sculpture from 2008, greets the visitors with its radiant shininess, giant reflective eyes and energetic form, preparing the guests to enter the artist’s ambitiously large scale painted environment. 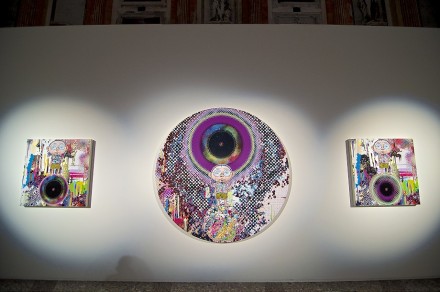 Vibrant elements from Japanese anime, gruesome landscapes echoing Hieronymus Bosch’s paintings and the playfulness of pop-culture unite in Murakami’s paintings of the arhats, which he compares to the representations of Pokemon in an interview with Mousse Magazine.  Murakami delivers his arhats in various physical attributes, blending a slight humorous approach while telling the ancient tale of Buddhist monks challenging death and decay.  As a reaction to the nuclear disaster in Fukushima, the artist portrays these figures of religion to bring back a spirituality which is now often dismissed in Japanese society. Amongst all the tragedy of natural and manmade disasters, these monks, resisting their own demise, stand out to symbolize spirituality and purity in the most basic sense. 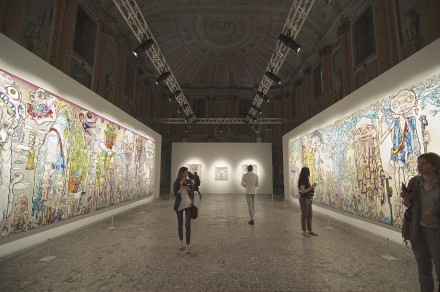 Along with his large scale works, the artist also presents small-scale paintings in which the image of Murakami himself is always present, standing on atomic black spheres. According to the artist, the representation of his own image is an homage to the classic art historical self-portraits, as well as a reference to dead souls drifting in space. Happening at the same with the exhibition, Milan is also hosting the European premiere of Murakami’s first feature film, Jellyfish Eyes, narrating a story of a giant monster and its impact on people, combining animation with real life actors.

Takashi Murakami: Arhat Cycle is on view at Palazzo Reale through September 7, 2014. 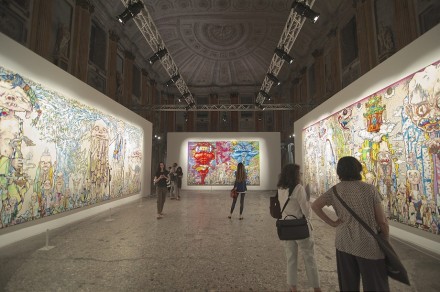 This entry was posted on Thursday, September 4th, 2014 at 12:00 am and is filed under Art News. You can follow any responses to this entry through the RSS 2.0 feed. You can leave a response, or trackback from your own site.