New York – Wassily Kandinsky: “Kandinsky Before Abstraction, 1901-1911” at The Guggenheim Through Spring 2015 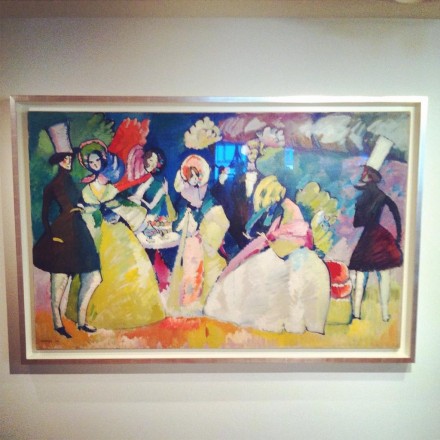 On view at the Guggenheim New York is an exhibition of early works by the pioneering Russian modernist Wassily Kandinsky, made between the years of 1901 and 1911, during the time he and his partner Gabriele Münter traveled extensively throughout Europe, Tunisia, and Russia.  The works, featuring a blend of Kandinsky’s developing lyrical style and his more early, studied figurative pieces and landscapes offer a strong look at an oft-overlooked part of the artist’s career.

Kandinsky was born in 1866 in Moscow, and in 1895, he abandoned a legal profession to focus solely on his artistic career, when he became the art director of the printing firm Kushnerev in Moscow.  In 1896, Kandinsky left for Munich and began evolving his printmaking techniques. His early work is informed by memories of Russia, particularly its furniture and votive pieces he observed in homes of Russian peasants.  From 1904 to 1908, Kandinsky and his partner Gabriele Müntner traveled to Venice, Paris, Amsterdam, Tunisia, Russia, and then back to Munich, when Kandinsky began translating his prints into landscape painting. His paintings at this time were highly influenced by his printmaking routines, including the use of clearly delineated forms, flattened perspective, and black-and-white “noncolors.”

However, shades of Kandinsky’s later evolution are hinted at here, particular in the gradually expanding brushstrokes and experiments in vivid, bright colors that seem to emerge as his works approach 1911, a seminal year in the artist’s career, and one which saw the publication of Concerning the Spiritual in Art, the artist’s foundational manifesto.  The show includes an early masterpiece by the artist, Pastorale, a stirring indication of his future work.  Kandinsky’s female figures explode with a vivid energy, rendered in hasty strokes that flow smoothly through the lines and forms surrounding them, an indication of his growing awareness towards alternatives in painting and visual aesthetics that would come to dominate his career. 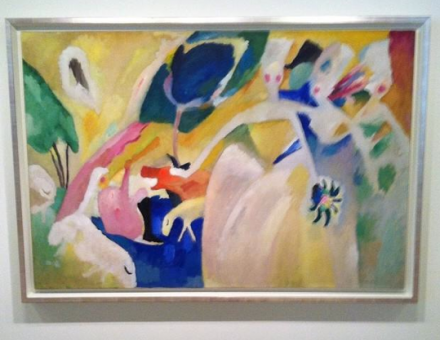 The works on display are drawn entirely from the Guggenheim’s own holdings, and shows the impressive relationship that the museum has had with Kandinsky and his estate over the course of the last century.  The Guggenheim’s first collector, Hilla Rebay, made a point of collecting Kandinsky’s work in 1929, while the artist was still pushing his craft forward. They would meet for the first time one year later at the Dessau Bauhaus, and Rebay would go on to acquire more than 150 of Kandinsky’s works for the Guggenheim’s collection.  Her fondness for the artist has paid off in dividends for the museum, enabling a dynamic and historically potent exhibition that far exceeds its scale in quality and perspective.

Kandinsky Before Abstraction, 1901-1911 will continue at the Solomon R. Guggenheim Foundation through the Spring of 2015. 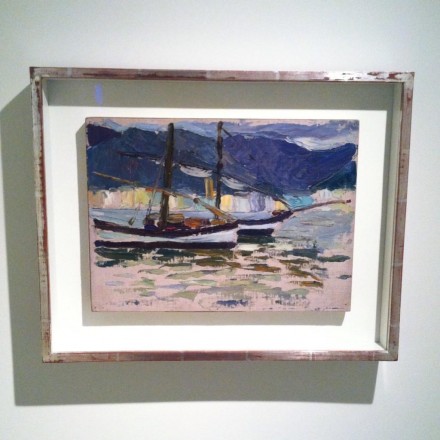 This entry was posted on Monday, September 8th, 2014 at 12:00 am and is filed under Art News. You can follow any responses to this entry through the RSS 2.0 feed. You can leave a response, or trackback from your own site.