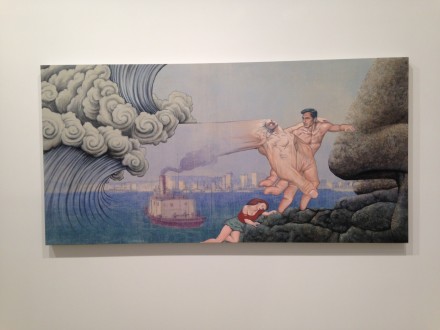 Jim Shaw, The Deluge (2014), all images via Osman Can Yerebakan for Art Observed

With a humorous wit and sarcastic tone, Jim Shaw has been mining the deep archive of Americana for decades, uniting the supposedly separated elements of high and low culture into comic pieces that carry a deeply caustic undertone. The artist’s newest show at Metro Pictures, I Only Wanted You to Love Me, continues this trend, featuring acrylic on muslin works that pull from expansive investigations of visual representation through strong symbolism and appropriation. 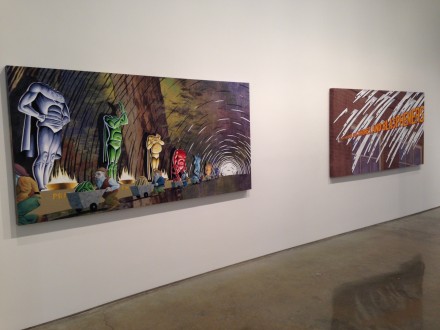 Jim Shaw, I Only Wanted You to Love Me (Installation View)

Shaw, similar to his West Coast peers Mike Kelley and Tony Oursler, redefines the materialistic limitations of art making, looking to a vast series of sources, while orchestrating narratives emerging from their suppressed undertones. In his current show, the artist’s source material spans from Alfred Hitchcock to Biblical myths, suggesting detailed and refined readings on these various phenomena and their precoded meanings. 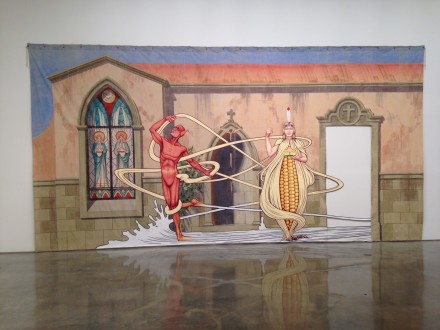 ‘Whistle While You Work’ is a bright example of Shaw’s interest in orchestrating a narrative vacillating between the absurd and subliminal, from various unconnected sources of inspirations.  Depicting seven dwarves using their mining abilities for the bizarre act of beheading sculptures of the seven deadly sins, Shaw blends religious mythology with highly commercialized Disney imagery.  Sculpted in the form of a typical super hero, Pride stands tallest among these sin sculptures, due in part to the perspective of the depicted tunnel.  Lust, on the other hand, formed as a super woman, seems to be the smallest at the far end of the tunnel that the dwarves pass through. 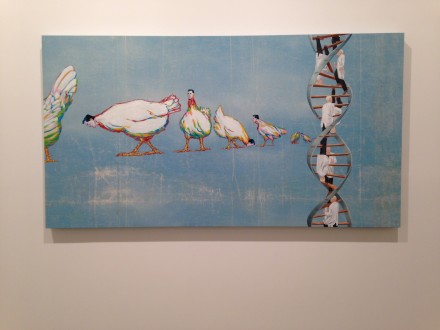 The Deluge, combining the aesthetics of Renaissance murals, superhero comics and classic Hollywood posters, absorbs the viewers into a spree of references within its large frame. Positioning Adam and Eve as actors Cary Grant and Eva Marie Saint in the Hitchcock classic North by Northwest, Shaw adds the iconography of the flood, another common element of Renaissance imagery, while placing these nude figures alongside an industrial landscape.  The hand, deriving partially from the approaching wave and partially from the steam of a tugboat, interferes into the intense flux of the depicted scene. As Grant/Adam leans on a giant marble nose, the work points towards Mt. Rushmore, a foremost symbol of American history. 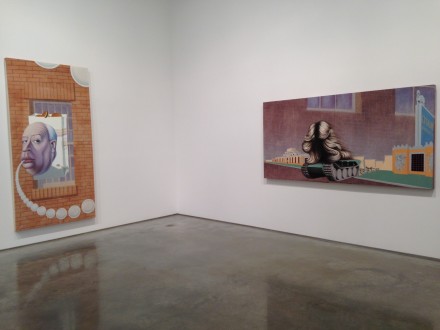 Jim Shaw, I Only Wanted You To Love Me (Installation View)

‘Wedding of the Ear‘ is similar in its attempts at a glorious marrying of pop culture elements with Christian iconography, consumeristic production and the discourse of colonialism.  The Flash, a comic book super hero signifying speed and cunning, stands next to a Native American woman whose lower body mutates into an ear of corn as she holds a box of Land O’Lakes butter, echoing the brand’s own logo in a subtly unnerving subversion.  A white snake twirls around The Flash, attempting to bite him on his buttocks as a flood of water rushes into the scene from the open door inside of the background chapel.

As open to multiple readings as possible, Shaw’s depictions eventually come out as a reckless triumph, celebrating unrestrained symbolism and sparkling twists on what is beyond the visible. At the same time, an undeniably critical approach can be detected, as the artist portrays his strong narratives through an ambitious and multifaceted web of allegories.

I Only Wanted You to Love Me is on view at Metro Pictures through October 25, 2014.

This entry was posted on Friday, October 24th, 2014 at 12:00 am and is filed under Art News. You can follow any responses to this entry through the RSS 2.0 feed. You can leave a response, or trackback from your own site.